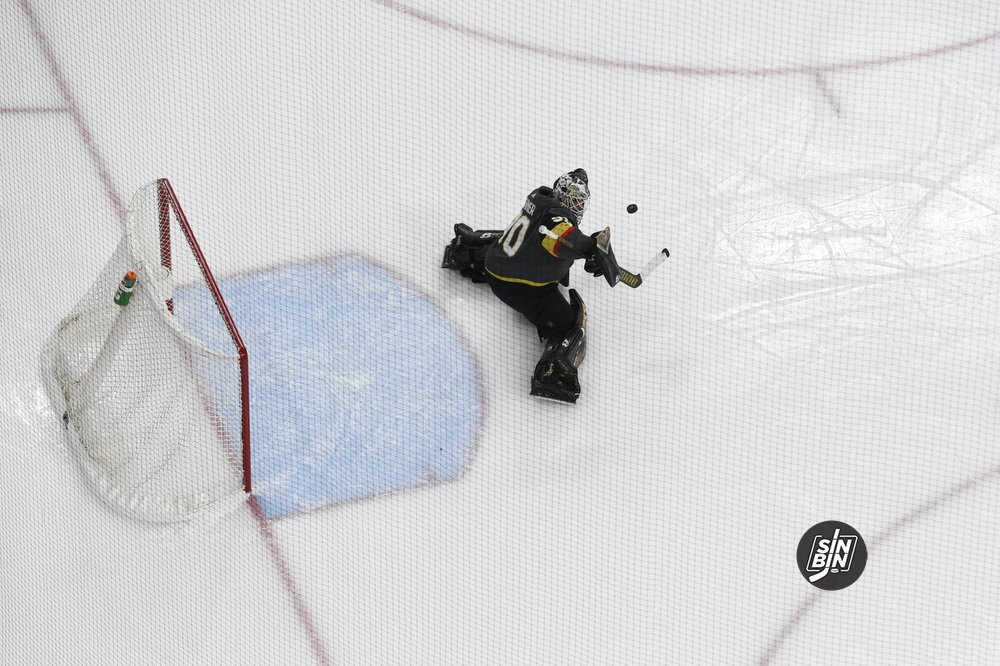 The saga at the end of the season between the pipes for the Golden Knights was, well, messy.

It started with Robin Lehner fighting reports of his injuries publicly and it ended with him serving as the backup in a must-win game when he had already decided his season was over and he’d undergo shoulder surgery.

In between, there were soft goals, scathing public comments about his play, a goalie pull during a tie game, a press release about a maintenance day, and a whole lot of speculation.

It’s the second time in three seasons with Pete DeBoer behind the VGK bench that drama about the goalie has marred the end of a season. At least this time there weren’t any graphic memes on Twitter.

So now, the focus turns to the simple question of “can Pete DeBoer and Robin Lehner coexist as head coach and starting goalie of this team?”

During his postseason media availability, DeBoer detailed his entire decision-making process during the final few weeks of the season and even went as far as to express regret that he used the term “healthy” about Lehner down the stretch. He then pointed to the situation as the main reason why it got so contentious.

It shouldn’t be a surprise that there’s friction at the end of a tough season between coaches and players or even players and players. Everyone’s frustrated, everyone’s pushing, there’s lots of tough conversations that are had down the stretch in those situations and you are pushing people to max amount because we need it. This isn’t something that’s unique to us or our group or Robin Lehner. -DeBoer

Lehner has yet to speak publicly since the end of the season and his subsequent successful should surgery and neither the front office nor the owner have made assurances that DeBoer would return as head coach next season.

But, the President of Hockey Operations had a strong opinion when asked if there was any concern about the relationship between coach and goalie.

I’m not. There’s been some noise about that but… (pause)… People get over it. –George McPhee on Bob McCown Podcast

DeBoer had plenty of positive comments about Lehner as well.

I have no doubt about Robin Lehner’s ability. None. I’ve seen it first hand. We’ve seen him at an elite level, what he’s capable of doing. -DeBoer

Further complicating the issue is the fact that the Golden Knights have a backup set to make nearly $2.5 million in Laurent Brossoit (who was good until he got hurt), and a rookie who grabbed the position by the horns and nearly willed his team into the playoffs himself while Lehner was out.

The last time the Golden Knights experienced goalie controversy, they surprisingly brought everyone (Fleury, Lehner, DeBoer) back. It resulted in a Vezina trophy and then a trade of the goalie that won it which netted Vegas absolutely nothing.

This time, there are plenty of options, and while common sense would say a lot must be done to unify the position for next season, history tells us the newest controversy may have just begun.