October 3rd is right around the corner. That’s the day NHL teams are required to cut their roster down to the 23-man squad that will begin the regular season. The Golden Knights now have 30 players remaining in camp who are eligible to make the final 23.

It’s not as simple as picking seven guys to send down to the minor leagues though. In the NHL, if you want to “re-assign” a player to the AHL, the player must go through a process called waivers. In short, every team has the option to buy the player’s contract off the Golden Knights and place them on their NHL roster. Unless… the player is waiver exempt, like Shea Theodore, Tomas Hyka, and Alex Tuch.

To this point, 91 players have been placed on waivers in the NHL, including Chris Casto, Paul Thompson, and T.J. Tynan of the Golden Knights. A total of 1 player was claimed (Jordan Nolan LA -> BUF). Over the past three years, more than 1,000 players were placed on waivers prior to the season, only 15 were claimed. It’s not terribly common, but it does happen. 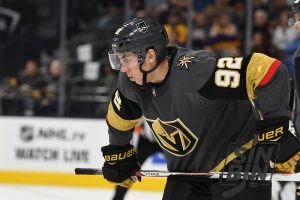 Are Hyka and Tuch worth the risk to try and sneak Nosek through waivers? (Photo Credit: SinBin.vegas Photographer Brandon Andreasen)

So, who are the guys Vegas may have to consider trying to slip through the process? Starting with forwards, Brendan Leipsic, Tomas Nosek, Teemu Pulkkinen, and William Carrier are the four players who have 2-way contracts. Assuming the Golden Knights get James Neal back to start the year, which now seems probable, there are four spots available to go to those four players plus Hyka and Tuch. Send the waiver exempt players to the AHL and there’s no risk of losing anyone, but if George McPhee wants to keep Hyka and/or Tuch, he’ll have to roll the dice to try to get someone through.

On to defense, where it’s even more crowded. The Golden Knights are expected to keep eight defensemen. There are currently 11 remaining in camp. Shea Theodore is the only one of the 11 who is waiver exempt. He’s also the only player on a 2-way contract, meaning the Golden Knights must find something to do with two (or three if Theodore stays) NHL contracts.

The most likely options to be sent away via trade are Griffin Reinhart and Luca Sbisa, but if a deal isn’t done, McPhee will be left sorting out a group of about five to fill two roster spots. Those players are Reinhart, Sbisa, Brad Hunt, Clayton Stoner, and Theodore.

This isn’t going to be easy, but McPhee’s got to pick a path. Does he take the safe road and send away camp standouts Hyka, Tuch, and Theodore? Does he make that trade we’ve all been waiting for? Or does he adopt the lifestyle of his new home and gamble on waivers?

There are two preseason games left, and five days left to make the decisions. Never been happier to be some blogger rather than an NHL GM.