On the night of the NHL Awards, George McPhee answered a question of mine in a way he’d never done before. He listened to my poorly phrased but pointed question and said, “that’s a good question.” That’s the moment I knew I was on to something. 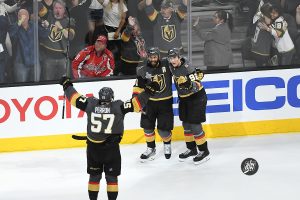 Apparently you don’t need to be talented to be good… or maybe you do and that was all just a mirage? (Photo Credit: SinBin.vegas Photographer Brandon Andreasen)

You’ve been there, debated it with someone, maybe even me. I’m sure you touched on things like “chips on shoulders,” “increase in opportunity,” “character,” or some other way to explain the fact that the Golden Knights did not have the best collection of hockey players in the NHL, yet still managed to come within three wins of lifting the Stanley Cup.

That’s where McPhee comes back in. Earlier in the same press conference in which I asked my “good question,” McPhee said this…

We did go by some people that may have been more talented but we wanted the right personalities, the right people here, and we put a lot into that and it’s an intangible that’s hard to describe but you know it when you see it. It was those intangibles that really carried this team a long way because all the other teams were more talented than we were. -George McPhee

I’m going to make you read that last part one more time.

…All the other teams were more talented than we were. -McPhee

According to their own GM, the Western Conference Champions were the least talented team in the NHL. Take it literally like that or not, the sentiment is still the same, the Golden Knights were not as talented as most, if not all, of their opponents. Yet, they won and won and won and nearly won the whole kit and caboodle.

You made it to the Stanley Cup Final with the least talented team built mostly around “character,” is that a sustainable strategy moving forward, or do you need to go out and add more talent to remain among the best teams in the league?

That was what I was trying to ask, instead, I said this…

Do you need to add a lot more talent throughout the coming up seasons or can you keep playing with the team you say is not the most talented in the league? -SinBin.vegas

Even with my poor wording, it is a good question, and McPhee gave one hell of an answer.

That’s a good question and that’s part of the debate, what kind of model do you go with and so let’s see how things go and you’ll know which way we went. -McPhee

Cryptic, to say the least. However, one thing is proven by the answer, that the debate over sustainability is raging on in the Golden Knights offices. Surely there are people saying, “we were three wins away why the heck would we change anything now?” While there are probably others saying, “if we were that good this year imagine how good we’d be next year if we add some high-end talent like Erik Karlsson or John Tavares.”

I don’t know how things will go. Whether we do anything at all. There’s no urgency for us to do anything. We like the team we have. We like the model we have. If we can make it better by doing something that makes sense, then we’ll do it. -McPhee

That’s what McPhee said after the conclusion of the draft when he was asked about his free agency plans.

SinBin.vegas can confirm there has once again been legitimate interest in completing a deal to bring Erik Karlsson to Las Vegas. We cannot confirm any discussions with John Tavares, Ilya Kovalchuk, James van Riemsdyk, or any other top free agents, but no matter which big name comes up, the word Vegas usually isn’t too far behind.

So, which path are they going to take? Do they go all out, use up the cap space, and bring in superstars? Or do they stay the course, let James Neal, David Perron, and others walk because that’s how the Golden Knights were built in the first place?

We’ll find out soon enough, and I know which way I’m rooting for (go big baby!). I’m just really glad I’m not the one making the decisions because this is uncharted territory, even for the guy who build both participants in the last Cup Final.

All I have to do is ask questions, and I’ve been told, I ask good ones.