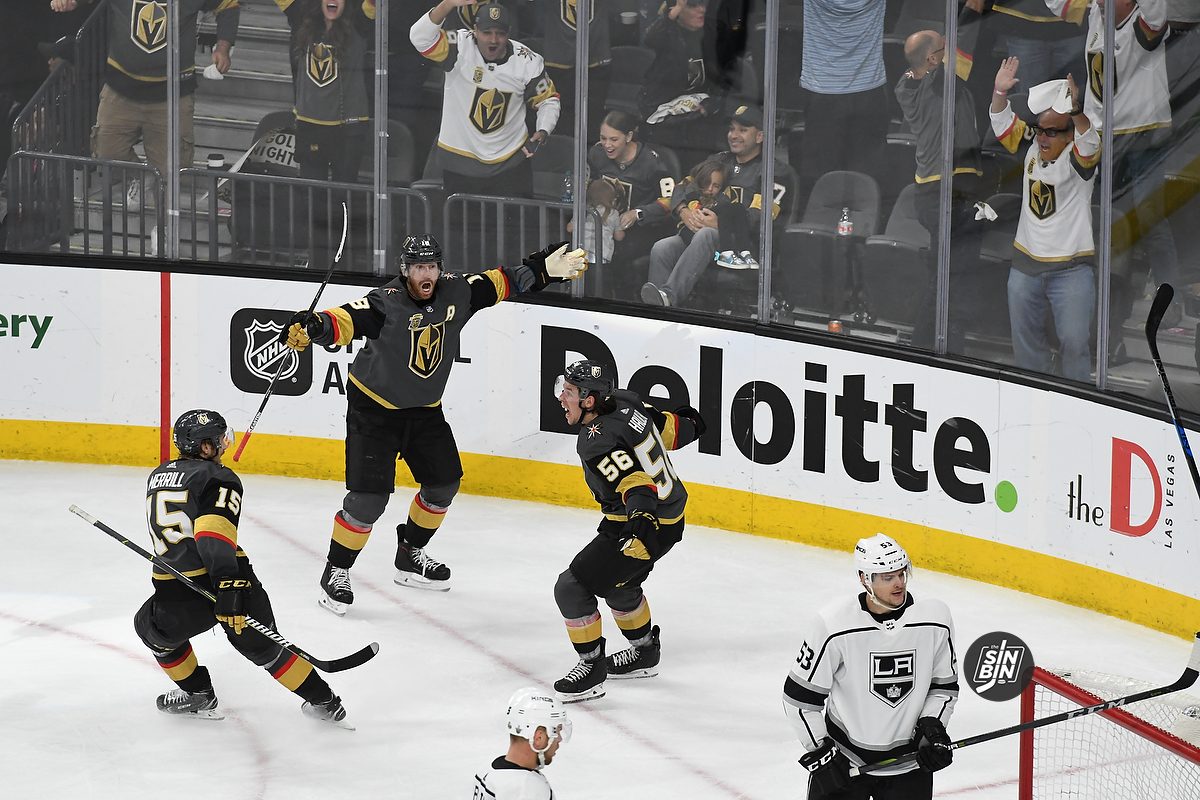 Most of us remember moments like this, McPhee remembers much more. (Photo Credit: SinBin.vegas Photographer Brandon Andreasen)

Last year the Golden Knights second line was Erik Haula, David Perron, and James Neal. They netted 70 goals and put up 165 points, excellent offensive production for a second line. However, they posted a -26 rating despite taking just 26.3% (including neutral zone draws) of their faceoffs in the defensive zone.

We did have to change the second line from what it was last year because as far as second lines go it wasn’t good enough defensively. It produced, but the goals against per 60 minutes was not good enough. We were actually dead last for second lines in the league. -George McPhee on VGK Insider Show

We can’t find the exact stat showing Haula, Perron, and Neal but if McPhee uses the phrase “dead last” he’s got to be confident in the numbers. We could find this stat, however.

Those numbers are calculated based on the total time when all three players were on the ice together at even strength. As you can see, the Haula, Perron, Neal line was horrendous defensively, especially when compared to the Golden Knights first and “fourth” lines.

You can either look the other way on that or you can try to address it, so we are trying to address it. -McPhee on VGK Insider Show

The new second line is likely to feature at least two new players and maybe all three. Paul Stastny appears ticketed to be the center of the second line with Alex Tuch on his right wing.

We added Stastny which we thought was a really important move to get a quality center and a guy who is good on faceoffs… Tuch is ready to be a full-time second line player. He had a good rookie season but we think with his ability, and his speed, and his size that he could really score a lot more goals this year than he did last year. -McPhee on VGK Insider Show

The question is whether it’ll be Tomas Tatar or Erik Haula on the left wing. In the interview on Fox Sports Radio’s, VGK Insider Show McPhee was complimentary of Tatar, basically writing off his poor play in Vegas.

Goals are sexy and the second line scored a ton of them last season, but the Golden Knights GM sees past the goals and he simply didn’t see enough defensively out of his second line. So, we blew it up completely. David Perron is now in St. Louis, James Neal is in Calgary, and Erik Haula is likely moving to the wing.

For a team that was three wins away from hoisting the Stanley Cup, it’s a bold strategy, but if it works, McPhee will look like a genius.

**The McPhee interview on Fox Sports Radio was excellent. Listen to the whole things here. Our stats for this article were compiled from NaturalStatTrick.com**