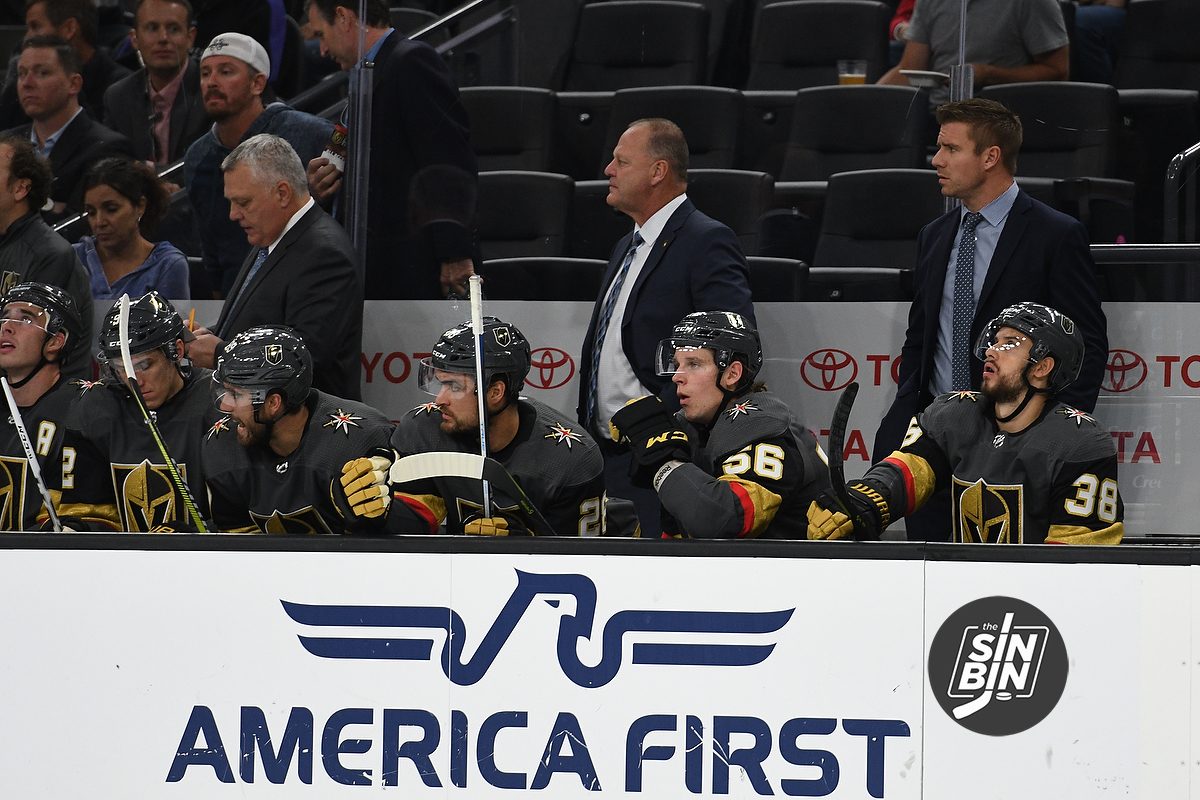 VGK’s early success leaves unanswerable questions. They aren’t a problem now, but they could be at some point. (Photo Credit: SinBin.vegas Photographer Brandon Andreasen)

On April 13th, 2017 Gerard Gallant was named head coach of the Vegas Golden Knights. At the introductory press conference, there was a specific quote from George McPhee that stuck out to me at the time. I’ve carried it as somewhat of a pillar of how the organization was going to be run ever since.

With every move the Golden Knights have made, or not made, from sending Vadim Shipachyov back to Russia to healthy scratching Griffin Reinhart every game he was on the active roster to acquiring players like Malcolm Subban, Ryan Carpenter, Tomas Tatar and Ryan Reaves, I’ve viewed the decisions through the lens of that quote. McPhee gets the players, Gallant coaches them.

During the Expansion Draft, that’s how it was. In fact, I can specifically remember speaking to Gallant at an event during the 72 hours the Golden Knights were on the clock, and he sounded as if his opinion was completely unnecessary to the process. However, as the season has worn on the lines of that quote have blurred a bit. When the trades were made, Gallant admitted to having a bit of say on who McPhee would bring in. The Shipachyov saga had the coach’s fingerprints all over it, and the Subban/Pickard goalie situation at the beginning of the year put Gallant in a hole he likely was not terribly comfortable with.

Then came the Tomas Tatar situation. With David Perron returning from injury in Game 3 of the Kings series, Gallant had a decision to make. He basically had three options available to him, and one was going to look awfully bad on his GM. Being up 2-0, he could have left the lineup as is and kept Perron on the shelf. Or, if he wanted Perron back in, he had to choose between Tatar and Carpenter as the player to come out. One player was a waiver addition that cost McPhee nothing to acquire, the other was a deadline trade addition that cost three draft picks including the Golden Knights 1st round pick next year.

Based solely on play, Tatar was the right man to come out. He never quite gelled with a line in Vegas and hadn’t shown the ability that made him a 19+ goal scorer each of the last five seasons. But, he didn’t come cheap, and sitting him in the Golden Knights biggest game of the season would be viewed as an immediate indictment on McPhee’s trade.

You don’t think I talk with George when we make lineup decisions? I’m the coach, I’m going to put them out there if I want them out there, but we talk every day and he knew before I made the decision. We said, listen, this is what we think is best and he agrees with most of the things we do. If he didn’t agree with it he didn’t tell me. (He says) you’re the coach put your best lineup out there. -Gerard Gallant

He’s right, it didn’t come as a surprise to me that McPhee was included in the decision to go with Carpenter over Tatar, it only makes sense. But back to that pillar that was made very clear the day we met Gallant, “we’re not going to tell him how to coach and he’s not going to tell us how to find players.” In the end, McPhee stepped back and heeded his own words, but what if he actually didn’t agree? What if he thought Gallant was making a mistake and Tatar was the right man for the role? Would he have stood down then, prior to Game 3 of the first round? What if Gallant wants to pull Fleury and start Subban in a Western Conference Finals game in Winnipeg? 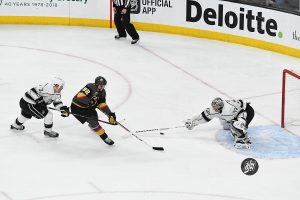 Think about a player like Nosek, who deserves the credit for what he’s done this season? (Photo Credit: SinBin.vegas Photographer Brandon Andreasen)

Who wins that argument? The undisputed coach of the year that has been pressing the right buttons all season long or the mastermind who handed him all the talent in the first place? The guy who turned William Karlsson into his top line center while claiming there was no place for a $10 million Russian “superstar” or the guy who found the 43 goal man plus, Haula, Tuch, Theodore, Carpenter, Schmidt, McNabb, Miller, and so many others that have made this team what it is?

I do not know the answer, and honestly, I don’t think anyone does. Gallant’s logic is sound and I’m not trying to insinuate McPhee actually disagreed, I’m just wondering what happens if he did, or does in the future.

I think that’s how most organizations are run. This situation has not come up with that top end of a player (for me), but the situation comes up all the time. As coaches you just try to put your best lineup out there, you just do the best you can. Is it tough to do? Yeah, but we’re here trying to win. For me the decision was tough because David Perron was one of our better players all year long, he comes back off the injury, and I didn’t want to mess with the lineup. It’s not fun for the guy that you’ve got to take out but I think they understand. It’s not about power though, trust me. -Gallant

To me, it sounds like a healthy, stable, excellent relationship that has taken an expansion roster from laughingstock to a first-round sweep in six months, but it goes against what seemed like such a hard and fast rule from a GM who has been near the top of the NHL for 20+ years.

McPhee’s been on this mountaintop before. His teams have been in the second round in the playoffs seven times in his career and he’s reached the Stanley Cup Finals. Gallant has never been, but he’s currently orchestrating one of the best coaching jobs the NHL has ever witnessed. Neither has ever lifted the Cup however, and both likely have a philosophy on how to achieve that dream.

The decisions are easier during a season in which you never experience a four-game losing streak, or up 2-0 in the first round of a series in which you have the better team. They get tougher and tougher as the postseason rolls on. It’s not a power struggle now, instead, it appears to be the perfect symbiotic relationship that has the Golden Knights 12 wins from immortality.

Hopefully, it never changes and the Gallant/McPhee duo is running the Golden Knights for decades, but don’t blame me for being concerned that a problem may arise at some point in time. Afterall, McPhee’s been here before, and now’s not the time to remind everyone of how it’s ended… all seven times.