When the Golden Knights pulled off the blockbuster trade to acquire Jack Eichel, it became clear they would have to do some serious work to on their salary cap. That work is now complete and it has resulted in the departures of Max Pacioretty, Evgenii Dadonov, and Dylan Coghlan.

The trio of players shipped out accounted for 42 goals last season with Pacioretty missing more than half of the year due to injury. Also, while still unsigned, it’s possible Mattias Janmark and his nine goals exit Vegas as well. That’s more than 50 goals leaving the organization without a single new player being added to the fold (at least to this point).

So, how do they make up that offense?

That question was posed to GM Kelly McCrimmon at today’s press conference and his answer was essentially four-pronged. Let’s go through each of them.

McCrimmon specifically singled out Stone, but the larger point is that without virtually every important player on the team missing significant time, as we saw last year, there will be an influx in scoring.

Stone, Eichel, Karlsson, and Smith will all likely generate more this coming year than they did last year. Between them, they scored 51 goals and tallied 128 points in 2021-22. The career averages of those four players calls for something closer to 98 goals and 245 points. Throw in Martinez, Howden, and Hague and there’s room for even more.

It’s pretty clear that if the team is significantly healthier, scoring will go up. 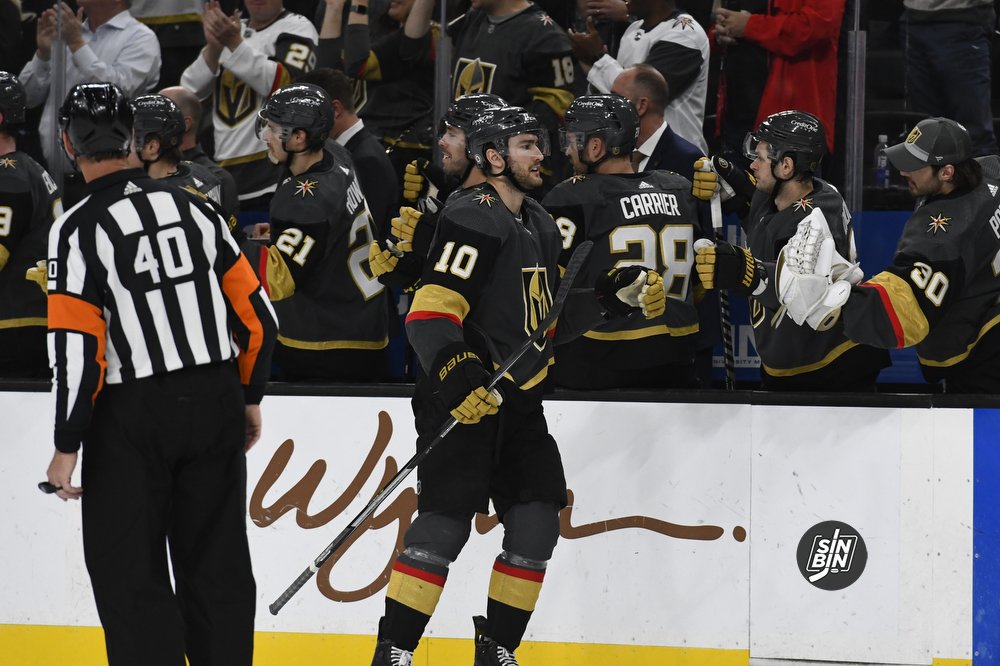 In this prong, McCrimmon is referencing the more established younger players like Brett Howden, Nic Roy, Nolan Patrick, and Michael Amadio. There are injury issues with a few of these guys that continues along with the last prong, but the idea is that with Pacioretty and Dadonov out of the picture there will be more room for these players to grow offensively.

Val Nichushkin from the Colorado Avalanche was used as an example of a player who was given a bigger role with Brandon Saad’s departure and thrived especially in the postseason. McCrimmon believes at least one of these guys will step forward and make a bigger impact than they even did in 2021-22 when they scored a combined 37 goals.

Bruce Cassidy is the key here. With the new coach and his historically strong power play, there’s a strong belief that special teams will become a strength in 2022-23. Obviously, moving two of the better power play weapons in Pacioretty and Dadonov won’t help, but there’s still enough talent on the roster to operate a successful power play.

There are also two places where the power play can improve the offense. The obvious is raising the percentage at which they score. VGK’s PP finished last year at 18.4%, more than 2% below the league average. If that number bumps up three or four percent, it will make a big difference. The other place is in how many they draw. The Golden Knights earned 212 power play opportunities last year, well under the league average of 237.

More chances coupled with more frequent success will make up a lot of offense previous Vegas teams have left on the table.

It’s not exactly a ringing endorsement for Brisson, and I’m not sure what it says about the others pushing to make the team like Ivan Morozov, Pavel Dorofeyev, Jonas Rondbjerg, and Jake Leschyshyn, but it does seem like the Golden Knights believe there’s a chance a rookie could make a bigger impact than they have in VGK’s past.

McCrimmon raved about Brisson’s hand-eye coordination and said his development is coming along nicely, but he didn’t exactly speak with a ton of conviction in his belief that Brisson (or anyone else around his age) is going to be a major contributor to the offense… though he left it open as a possibility, despite mentioning it last.

There’s no denying the Golden Knights have a lot of work on their hands to make up for the losses of Pacioretty, Dadonov, Coghlan, and potentially Janmark, but there is a path McCrimmon says, “We’re comfortable that we’re in a good position to start” to do it.

SinBin.vegas Podcast #275: Pacioretty For Nothing