When you ask anyone with a hockey brain why the Golden Knights have been so good this year, the word “balance” will inevitably come up. Balance insinuates that all four lines and all three pairings have played a major role to the success Vegas has experienced to this point. 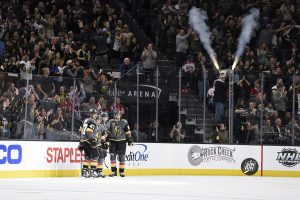 This team has done a lot of winning, but they’re going to have to do a lot more to prove George McPhee right. (Photo Credit: SinBin.vegas Photographer Brandon Andreasen)

You can point towards George McPhee and front office building the team, All Star coach Gerard Gallant for pulling the right strings to get them to mesh together, and/or the players for taking that chip on their shoulder and coming together to become a force in the NHL quickly. But no matter which way you point, you’re pointing to a winner.

So when the deadline rolled around, it was reasonable to think the Golden Knights would stand pat with their first place roster and focus on the next game at hand (I learned that statement from Turk). Then, they didn’t.

I don’t think that we need to do anything really, but if there are opportunities to make the club a little bit better – one percent, two percent, three percent – you do it if it’s not going to affect chemistry and if you’re not going to take anything out of the lineup. -George McPhee 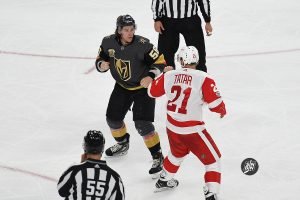 Wait, I thought Reaves was supposed to be the fighter? (Photo Credit: SinBin.vegas Photographer Brandon Andreasen)

The Golden Knights acquired Ryan Reaves, a 6’1″ 225 pound mammoth of a man most known for his toughness, grit, and physical presence on the ice. McPhee craftily gave up nothing but The Creator’s money to make this happen. Then McPhee went out and added Tomas Tatar, a consistent 20+ goal scorer from the Detroit Red Wings for a 1st, 2nd, and 3rd pick.

In theory, the team got better, but it’s the last part of McPhee’s statement that brings up a legitimate concern.

Tatar and Reaves are going to play. That means players like Ryan Carpenter, Cody Eakin, William Carrier, Tomas Hyka, Oscar Lindberg or others will be forced out of the lineup.

We’re obviously very confident with our group but it’s up to George (McPhee) to do what he wants. Obviously, I think that everyone’s aware of the chemistry that can be changed if you add too many guys or the wrong piece. You’ve seen it with teams in the previous years. Last year they added (Martin) Hanzal in Minnesota and we (St. Louis) knocked them out in the first round. A guy like Haula, who I thought was playing really well on the third line, he gets bumped down to the fourth line, it changes his role. You understand teams trying to get better but in my opinion, you’ve got to make sure the guys who got you there have to be the guys that keep driving the bus. -David Perron

Perron went on to speak glowingly about Reaves and I’m sure he and his teammates will do the same of Tatar, but his point is a good one. The team is the best in the league, and they got here with this group. With Tomas Nosek and Pierre-Edouard Bellemare on the “fourth” line with William Carrier. With Cody Eakin centering a line with Alex Tuch and Brendan Leipsic (whose place would have been taken by Hyka). With Ryan Carpenter filling in and eventually finding his game and making an impact. The additions of Reaves and Tatar completely change that.

The Golden Knights have now brought in both. Tatar is fast, quick, good on the forecheck, and reliable in the defensive zone, much like the rest of the Golden Knights. Reaves is a breath of fresh air, unlike anyone on the Vegas roster. These players will make a difference, but it’s far from a guarantee that it wil be positive.

The point here is this, the Golden Knights are the best team in the NHL, they can get better, but not by much. They could also, however, get worse. Adding players in the middle (or really towards the end) of a season is a risky proposition and in many ways an unwinnable one. You can’t be better than the best, but GMs always try using the premise of  “if you don’t think you can improve, you are getting complacent.”

Here’s the good news. George McPhee has been an absolute wizard in building this roster. It’s incomparable to any team in the history of the NHL. At the same time, Gerard Gallant is running away with the Jack Adams Coach of the Year Award. The locker room has seen pieces added with Tuch, Theodore, and Subban early, and then Carpenter later, and they’ve also seen pieces subtracted that were supposed to make an impact whether via injury or “retirement.” None of it has mattered. All they’ve done is win, and they’ve kept winning no matter what has changed.

So, here we are now, with one major addition, and one minor one. One player that fits in stylistically, one that doesn’t. Players coming into the lineup and others coming out. Simply put, change. Change to a winning team.

It’s fair and rational to be concerned that they won’t fit in, and if they don’t it could be one of the biggest blunders in trade deadline history. But the short history of the Golden Knights strongly suggests it won’t be an issue, because nothing has been for a team on one of the most magical runs in any sport, ever.

A lot of thought went into (disrupting chemistry). If you are making a couple of additions, of course you ruminate through that to make sure you are doing the right thing. But I think the most important thing is with both of these players the rest of our players are going to welcome them here and be happy they’re here. We get a big strong guy in Reaves, we get another talented speedy player in Tatar, and most importantly we didn’t take anything out of the lineup. None of our regular players are elsewhere, they are all here, we kept everyone. I think the chemistry will be even better, our room will be even better, and our team is even better. -McPhee

Personally, I’m highly against making moves at the deadline to supplement the best team in hockey. I’ve always believed the best way to go is to stay the course and let the rest of the field try desperately to catch up. My concern remains, and it’ll probably be a motif throughout much of what you read on this site over the course of the next three months, but my mind tells me to trust McPhee, trust Gallant, and trust that this team is different.

Hopefully, they actually are, because otherwise, we’re all going to have a hard time sleeping thinking back to what could have been if the team simply did nothing.