Often times Brian Blessing of Vegas Hockey Hotline fame rings my phone in what eventually becomes a 45+ minute conversation about various Golden Knights related topics. Normally it’s just complaints over the saltiness of the press box peanuts or disagreements over intermission entertainment (don’t care what he says, this video is glorious), but last night he brought up a point so good it needed to be fully researched and shared. 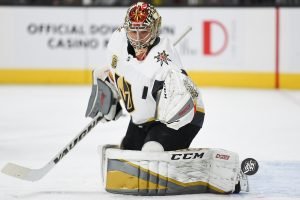 Was Max Lagace great for the Golden Knights? No he was not. But what he definitely was not either, was terrible… like he probably should have been. Normally when a team loses their starting goalie they try and tread water until he returns. When a team loses their second goalie they are just hoping to win a game here and there. We don’t even know what happens when teams lose their third goalie because it hasn’t happened in decades.

The Golden Knights did not tread water while Lagace was in the net. Instead, they maintained the play and even put together a five-game Pacific Division win streak in the middle of his 13 game tenure.

Vegas getting their first goalie back after missing 25 games and their second goalie after missing 13 games should be hoping for a massive upgrade in overall results. Instead, because of the play of Lagace, they’re simply hoping to keep going the way they have.

Every night I felt we had a chance to win, it didn’t matter who was playing. They did a great job and they are a big reason why we are at where we are at in the standings. It was fun to watch. -Marc-Andre Fleury

Vegas is 13-3-0 with a goalie that didn’t begin the season fourth on their depth chart. They are 4-0-0 on the road with Fleury and Subban.

The Golden Knights have been dealt, by far, the toughest injury situation of any team in the NHL this season. Teams have lost stars, others have lost multiple top line players, but no one has lost three goalies inside of the first 10 games of the season. No one has lost anything even close.

But because of the play of Maxime Lagace, it didn’t really matter. Vegas is securely in a playoff position 29 games in AND they’ve earned  14 points in the 14 road games without a goalie who had more than three career starts prior to this season.

Lagace let in a lot of pucks during his 13 game run as the Golden Knights starting goaltender, but he did make one save that should never be forgotten as he heads back to Chicago… the save of the Vegas Golden Knights season.