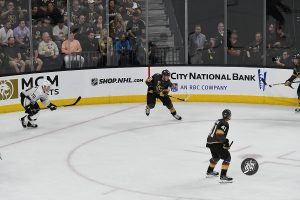 If you ask All Star head coach Gerard Gallant if he likes to match lines he usually responds with some sort of quip about how he’s not smart enough to make it happen. Instead, he prefers to roll four lines and attempt to let his guys play their game and force the opponent to match them.

However, on the other side of the ice, it’s a different story. For much of the year Nate Schmidt and his partner (Brayden McNabb or Luca Sbisa) have drawn the best offensive line of the opposing team. Last night was no different as Schmidt/McNabb were on the ice for a majority of their time against the Kopitar, Brown, Iafallo line. The difference for the Golden Knights is that they didn’t just limit the defensive matching to one line, they did it with the Jeff Carter line as well. Deryk Engelland and Shea Theodore were matched up heavily on the Kings second line and did well shutting them down.

Schmidt and McNabb played nearly 13 total minutes against Kopitar and managed a positive Corsi For of 57.69 and only allowed four even strength goal scoring chances in that time. Engelland and Theodore did just as well in the 12 minutes they saw against Carter with a slightly above 50% Corsi For and only two scoring chances against.

You hope you are going to get those matchups as much as possible. It doesn’t happen every time and I’m not a guy who is going to yell at our guys to change right away when you get a non-matchup line. You just do the best you can as coaches. -Gerard Gallant

This matching also has an offensive benefit for the Golden Knights. Colin Miller and Jon Merrill both posted 60+% Corsi For and spent a majority of their ice time in the offensive zone, where Gallant wants them.

All in all, the Golden Knights did well in getting the right players on the ice against the right Kings, and it worked like a charm in Game 1.