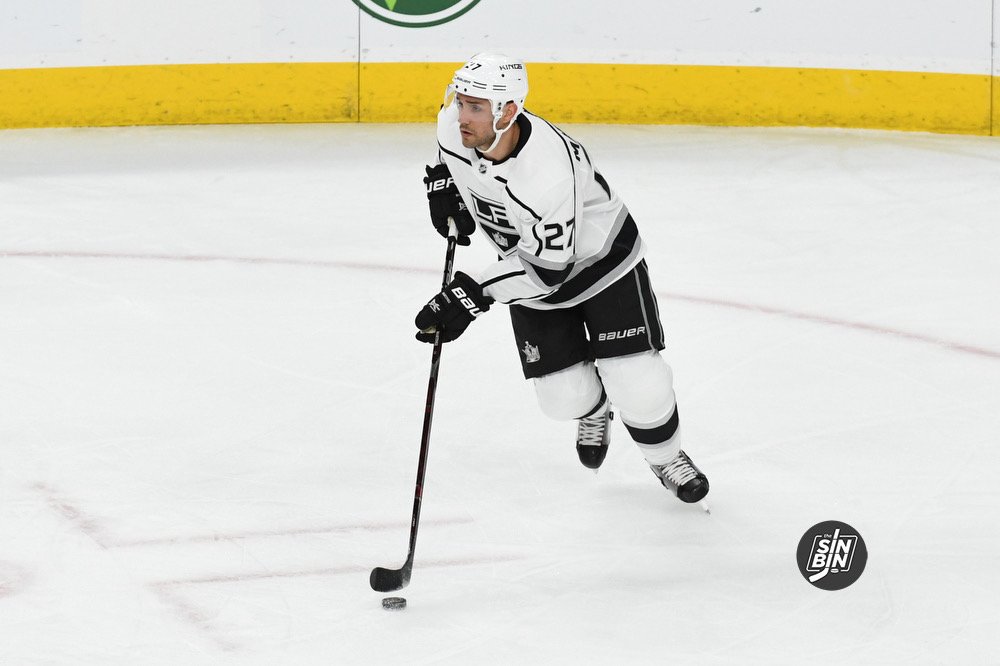 We don’t have a VGK Martinez picture yet. Please accept our sincerest apologies for this one where he’s wearing a hideous outfit. (Photo Credit: SinBin.vegas Photographer Brandon Andreasen)

In the NHL this season, of the 294 defensemen to make an appearance, 175 of them, or 60%, shoot left-handed. So, it’s not abnormal that Vegas has a bevy of them, but icing an entire lineup lacking a single right-hand shot defenseman is far from common.

The Golden Knights have used a roster with all lefties four different times this season. I looked as hard as I could, and I can’t find a single other team that has done it once this year. (Because I know you’re wondering, they were a winless 0-3-0 before Thursday)

This season, the Golden Knights have only used two defensemen that shoot with their right-hand; Deryk Engelland and Zach Whitecloud. They’ve played a combined 56 games. The next closest team with the fewest number games by right-handed defenseman is Arizona with 93. Every other team has over 100 with many over 200.

The reason the Golden Knights have been able to get away with it is because of how many players they have that are comfortable playing on both sides. Since joining the Golden Knights, Schmidt, Theodore, and Holden have all seen significant time playing both sides and Martinez may have more experience doing it than all three combined.

The Golden Knights wasted no time putting that skill to use. In Martinez’s first game, he was paired with Jon Merrill with Martinez playing the right. Not even a period deep, he scored a goal playing the left partnered with Shea Theodore. Later in the game, he killed penalties on the right with both Schmidt and McNabb, and as a power-play expired he played a full shift on the left of Holden.

We get a two-time Stanley Cup champion. We get a guy with real good leadership ability, very versatile in that he plays left defense and right defense equally well, excellent penalty kill defenseman, good in transition, and a player that we just really feel is going to improve our team and have a significant impact on our group. -McCrimmon

And this was all in a game in which Martinez isn’t even yet comfortable in the system, against the hottest team in the league nonetheless.

All the d-men and coaches were just helping me with particular situations where they handle things in a little bit different manner than I’m accustomed to. -Martinez

Moving forward, the Golden Knights are expected to use the six lefty lineup quite a bit (and if the rumors are true, they may add another left to the mix by Monday).

The versatility of four of the six gives DeBoer pretty much a blank canvas to work with. I’ve pointed out the possibility of using Schmidt and Theodore together, I’ve heard an idea of Martinez taking McNabb’s place on the top-pair, or they could leave it as is and roll out a pretty balanced trio of d-pairs.

He’s got puck-movers, skaters, stay-at-home guys, shot blockers, penalty killers, and a bevy of guys who can be relied upon against any competition.

Having six lefties isn’t ideal, but for the Golden Knights, it might just work.