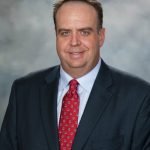 Las Vegas Team Will Be Named (Something) Knights