Once a year, since 2017, the NHL Players’ Association puts out a poll of questions answered by about 500 current players. Historically, the Golden Knights, Vegas, and T-Mobile Arena have been all over these polls, but this year, there was just one mention of VGK.

That honor went to Marc-Andre Fleury for the prestigious category of “Who is the best goalie? 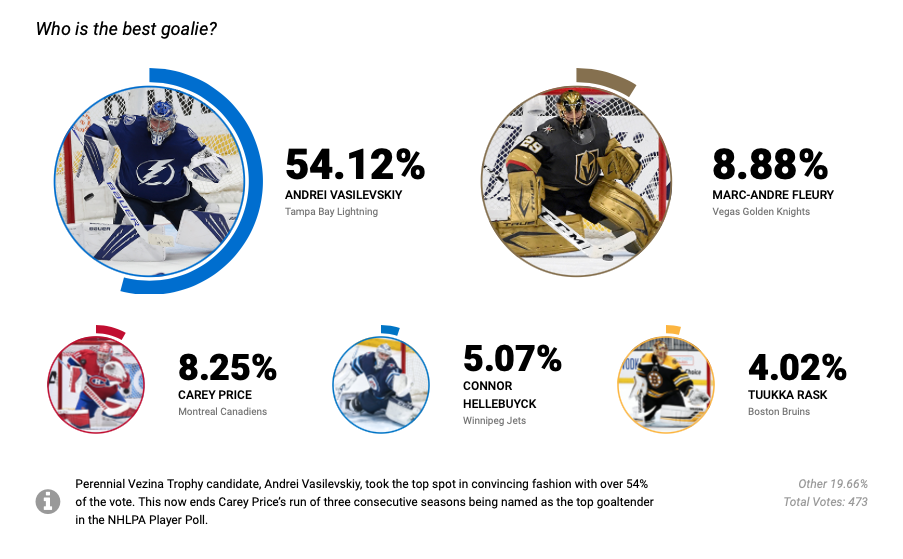 Fleury actually garnered fewer percentage of votes this year than he did a year ago but he passed Carey Price for the first time in poll history and rose to #2 on the list, the highest he’s ever been.

Last year, the Golden Knights were on the board seven different times including four player mentions. This year, Fleury is the lone Golden Knight listed, albeit on a much shorter list of questions.

Former Golden Knight Nikita Gusev cracked the list coming in 3rd place for the “most unique tape job.” Meanwhile, the Reverse Retro jersey that everyone seems to love despite it looking like a leotard was NOT listed among the top seven Reverse Retro unis.

Finally, and maybe the most interesting piece of the poll, was the fact that 292 players said they prefer the “series style” schedule the NHL used this season. About the same amount were also in favor of returning to the normal divisions, which is happening next season.

Player opinions will always be outweighed by financial ones, but the positivity towards the series-style schedule certainly may lead to it making a return in the near future. It’s unlikely we’ll see it next year, but I wouldn’t be shocked if it’s back at least in some fashion in 2022-23.

**You can read the whole NHLPA Players Poll here.**