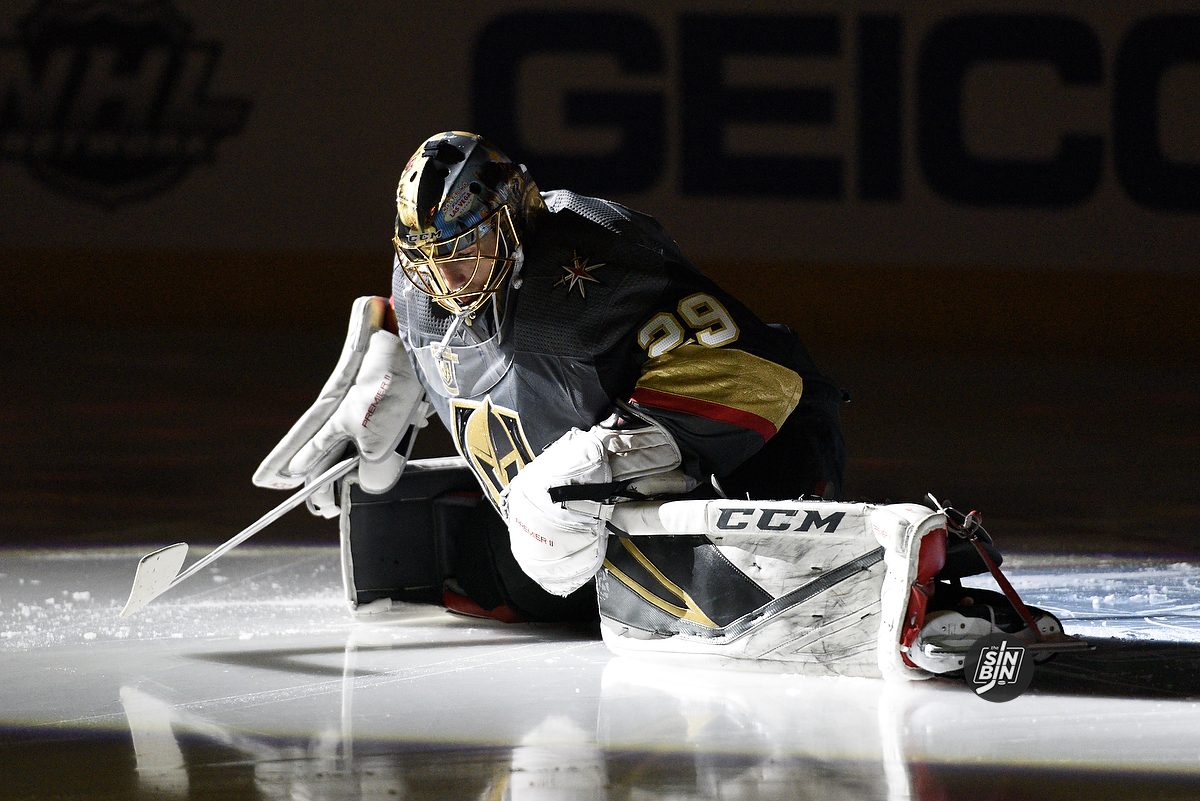 UPDATE: (3/22/18 10:58) – Fleury and Reilly Smith skated at City National Arena this morning for about 30 minutes. Fleury was not wearing his goalie gear and he he Smith were stick handling and shooting at empty nets.

UPDATE: (3/22/18 10:30 AM) – Multiple sources have confirmed Marc-Andre Fleury did go through concussion protocol Tuesday night. He passed protocol but was not inserted back in the game as a precautionary measure.

The team still does not believe he suffered a concussion but remain cautious. Fleury is not with the team in San Jose. They have yet to rule out having him join the team in Denver.

It remains unclear when he may return but the concern that it could be season ending is considered minimal.

UPDATE (3/21/18 5:55 PM) – Oscar Dansk has been recalled by the Golden Knights. He will join the team in San Jose tomorrow. This confirms Fleury will miss at least one game.

"He is not coming with us today, he could be with us tomorrow or the next day. I'm still not sure." -Gallant on Fleury

Gallant said they will call up Dansk or Lagace if they are needed but he said, at this point they are not needed yet.

Gallant confirmed Fleury is injured but he wouldn't give any more detail. Literally said, "no" when asked if he can expand on the specifics.

Following the 1st period of the Golden Knights game against the Vancouver Canucks, goalie Marc-Andre Fleury was removed from the game due to what is believed to be an injury.

I haven’t heard nothing yet. Trainers told me he’s not coming back tonight. That’s it. -Gerard Gallant

Fleury did not return to the bench the remainder of the game.

He did take a shot to the mask with approximately 10:00 minutes left in the period on the play shown below. The trainers did not examine Fleury at that time nor did they during the TV timeout that followed about four minutes later.

No, I have no idea. I thought it hit him, caught him in the chin. Either the cheek or chin. Hopefully he’s alright. Not sure if that had anything to do with it. Hopefully, it’s nothing with the head. -Brandon Sutter (Vancouver player who took the shot)

“Never want it to happen at the expense of an injury, I hope he’s doing ok.” – Subban on getting into game action in the second period. #VegasBorn

Marc Andre Fleury suffered some kind of injury. Gallant confims it wasn’t a “rest” and that the trainers told him Fleury couldn’t go.

Marchessault said the word was Fleury's sitting out the remainder of the game was precautionary and he wasn't seriously hurt.

Multiple sources have confirmed to SinBin.vegas that Fleury was being examined for a head injury, likely following concussion protocol.

Fleury suffered a concussion in the Golden Knights fourth game of the season on October 13th. He missed 25 games during that stretch.