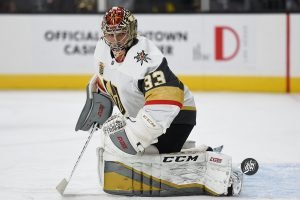 For the second time this year, the Golden Knights will be without their backup goalie, luckily this time the starter isn’t hurt as well.

Malcolm Subban sustained an upper-body injury during morning skate prior to the Golden Knights game in San Jose. Subban was dressed and was seen sitting under the bench during the game, but was apparently not available to enter that game.

All Star coach Gerard Gallant confirmed the team will recall Maxime Lagace. Lagace started 13 games during the Golden Knights goalie fiasco at the beginning of the year in which they lost three goalies in the team’s first 10 games. Vegas went 6-6-1 in those 13 games while Lagace allowed 3.79 goals per game and posted .872 save percentage. Lagace returned to the AHL with the Chicago Wolves where he has played in 14 games posting a .910 save percentage.

Oscar Dansk, who was sent back to the Wolves on January 24th has yet to start a game.

Both Dansk and Lagace are waiver-exempt this season, so the Golden Knights can freely rotate between the two assuming Dansk is healthy enough to play.