Game 4 was the first time in the eight-game playoff history of the Golden Knights where they were severely outplayed. It ended as a 4-0 beatdown and the Sharks had evened the series.

In response, Jack Adams finalist Gerard Gallant appears to be making a host of lineup changes. Based on morning skate, it seems Ryan Carpenter, Oscar Lindberg, and Luca Sbisa will be placed into the lineup, while Tomas Tatar, Tomas Nosek, and Jon Merrill will all come out. 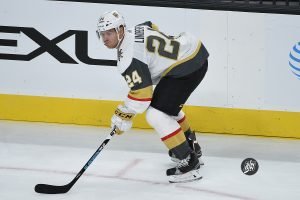 Last year, Lindberg was tremendous in the playoffs. If he does it tonight, Gallant is going to look like a genius. (Photo Credit: SinBin.vegas Photographer Brandon Andreasen)

This will be the first game the Golden Knights will be without Nosek since February 11th, and just the 3rd game all year in which Nosek will be a healthy scratch. Oddly enough, the last time Gallant chose to scratch Nosek it was a 5-4 overtime win against the Sharks on November 24th.

If Sbisa returns, it will be his first game action since February 27th. Lindberg would also be making his Vegas playoff debut having been out since the final game of the regular season on April 7th

You do what you have to do. You put your best lineup in that you think gives you the best chance to win that evening. We’ve done it all year, guys come in and play different spots and play different roles, it’s all you can do. You go with your decision, you talk to your coaches, and you do the best you can. -Gerard Gallant

The changes magnify the 1st period, however. With multiple players who have been out for over a month returning to the lineup and potential changes to three of the four forward lines (see below), the Golden Knights are vulnerable early. It often takes players a bit of time to get back into the flow after missing games, but Vegas can’t afford to fall into a hole.

Throughout this entire season, when the Golden Knights have really needed a game, they’ve usually gotten it. But beyond that, they’ve almost always started out those games well. That was the case the last time they had to “flip the switch” back on going from a disastrous loss in Calgary to the playoff opener, but the time before, against the Flames at home, it took a period or so to really get going.

This team has it in them to play a good game tonight, no one is debating that. They just have to do it right away. They can’t play anything but their best from the moment the puck is dropped, and that’s what makes the lineup changes concerning. The Golden Knights have home-ice advantage in a best of three series, now they have to take advantage of it, and they can’t let cold legs and unfamiliarity get in the way.

Vegas Losing Battle Of Fourth Lines, Especially In Games 3 And 4