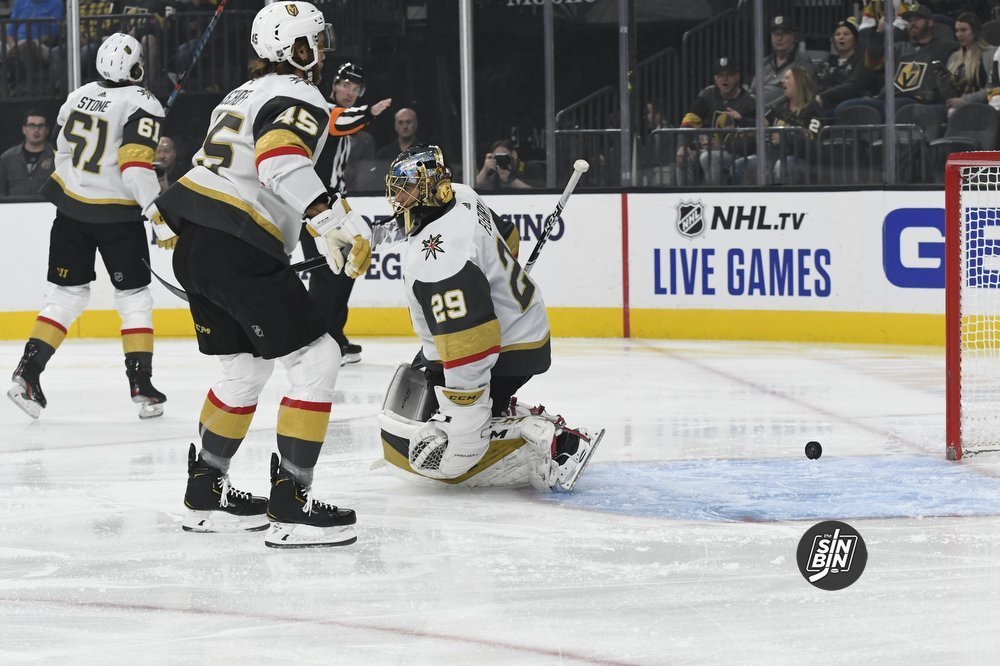 The Golden Knights’ best defenseman has only seen the ice for 3 minutes and 11 seconds this season.

I’d love to have him in my lineup, trust me, and he’s going to be there soon. -Gerard Gallant

Gallant made that comment about Nate Schmidt hours before the Colorado game, and then his team put on a 60-minute display of exactly why they miss him so much.

The head coach called the game “embarrassing,” “a total no-show,” and “a team effort” and his main focus was on their inability to defend as a unit. Vegas gave up a season-high 40 shots against, allowed five unanswered goals, and were forced to pull the goalie who has been the best in the league on a night he was playing well.

All in all, it was a complete and utter disaster defensively.

Luckily, help is on the way, and even as bad as it looked last night, Nate Schmidt’s return can, and probably will, fix it all.

The Golden Knights play a system that relies on all five players to defend. It starts with forechecking from the forwards making it difficult for the opposing team to exit their own zone. This leads to an aggressive style of defending the neutral zone taking away time and space and not allowing teams to move through the center of the ice with speed. That then lets Vegas’ defenseman challenge zone entries by standing up at the blue line. Finally, when the puck does end up deep in Vegas’ zone, they have layers of support to both defend and break the puck out when it is eventually turned over.

Pick any one piece of that equation, take it out, and the Golden Knights’ entire defensive structure falls apart.

The Golden Knights problems last night started at the defensive blue line. Vegas’ inability to challenge Colorado’s zone entries led to every other portion of the game spiraling out of control. Time and time again the Avalanche would skate the puck over the blue line without any resistance at all. 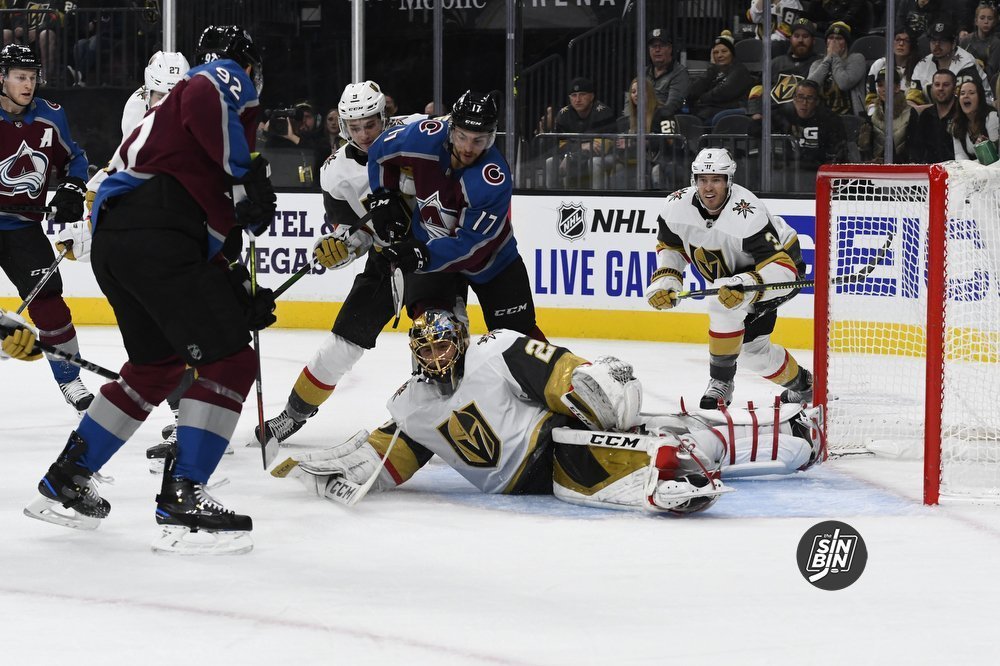 There are always multiple reasons for a problem in a hockey game, but with zone entry defense it almost always comes down to gap control. Gap control means how far away the defenseman is from the skater carrying the puck. In a perfect world, a defenseman wants to be within one stick length of the puck carrier and then challenge with a stick check the moment he attempts to carry the puck across the line. Obviously it doesn’t always work out that way, but the closer a defenseman is to the player entering the zone, the tougher life is on the forward. Last night, the Avs skated the puck in with ease just about every time they entered the zone.

That was the breakdown and it infected every other part of the Golden Knights game. There was no forecheck because forwards were spending too much time in their own zone. There wasn’t enough pressure in the neutral zone because more often than not new players were coming on the ice as Colorado collected the puck. And the puck support fell apart in the defensive zone because of tired legs from chasing the Avs around all night while they had the puck.

One issue leads to another, which leads to another, and it ends up looking like a game in which the Golden Knights simply can’t play with the Avalanche. They couldn’t last night, but they can in the future as long as their defense is with Nate Schmidt.

With Nate in the lineup, there are now two pairs that are consistently willing and able to stand up at the blue line as opposed to last night when there was just one. Theodore and McNabb were actually very good when they had the chance, but for the most part, their zone entry denials helped lead to reliving pressure, rather than creating it the other way. Schmidt’s return means more often than not, there’s at least one guy on the ice that will make zone entries tough even if there’s a breakdown in forechecking or through the neutral zone.

Again, the defensive structure relies upon everything to work together. When it does, it doesn’t really matter which line or pair is on the ice. When it doesn’t, it takes someone to step up and restore order. Offensively, the Golden Knights have plenty of those guys, defensively, they don’t. Theodore can rescue plays with his skating and McNabb can with his physicality, but beyond that, with Schmidt out, everyone else needs to be placed in a good position to play sound defense.

Schmidt is an all-around terrific defenseman and having him in the lineup relieves pressure on everyone else. He’s good all over the ice and adds elements to the game that no other Vegas defenseman does. Plus, he balances the lineup, taking massive amounts of defensive stress off Theodore and allowing him to chip in offensively. Last night, Theodore played 9:31 against Nathan MacKinnon. With Schmidt in the lineup, that number would be cut in half, if not less.

Believe me, I know how bad it looked last night against Colorado. It almost seems crazy to suggest that one player can solve it all, but we’ve seen it before. The Golden Knights were a mess for the first 20 games of the year last year, and almost like magic, Schmidt’s return quelled many of the problems in their own end.

Eventually, Schmidt will come back, and it will happen again. Trust me.