Tonight will be meeting six of the eight scheduled this season between the Golden Knights and Wild. So far, the Wild hold a slight edge having won three of the five games and have amassed seven points in the matchup compared to the Golden Knights’ five.

The Wild are currently the team Vegas has had the least amount of success against, especially defensively. The Golden Knights have allowed a total of 82 goals in 35 games, good for 2.34 goals against per game. Against the Wild, that number shoots up to 2.80 per game, about a half goal worse than their average and the highest of any VGK opponent.

One of the main reasons for this is the style of goals the Wild have been scoring against the Golden Knights. Unlike what we’ve seen from many other Vegas opponents this year, the Wild have harassed the Golden Knights goal crease, specifically at 5-on-5. Of their 10 5-on-5 goals, six of them have come with the puck sitting in the blue paint. Contrast that to Vegas, who have just one. 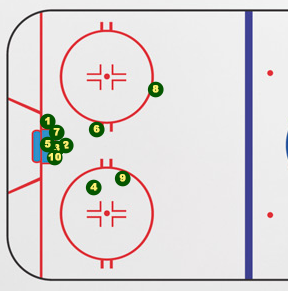 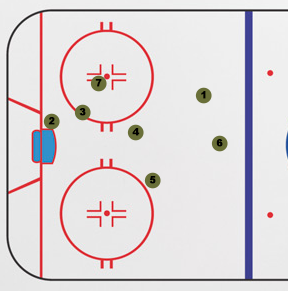 Minnesota likes to play a transition-style game in which they trade chances with their opponent, a style the Golden Knights deployed under Gallant the first season but have pivoted away from. That style usually leads to rush goals, which are typically scored a bit further away from the goal crease. But against Vegas, they’ve lived in the goal crease. When contrast to where the Golden Knights have gotten their goals, this is a bit concerning for not only tonight but a potential playoff series next month.

Quite simply, the Wild have scored from more replicable places on the ice than the Golden Knights have in the first five meetings.

Both sides of the ice are issues. It’s the defensive side that’s of bigger concern to me though.

When playing the way the Golden Knights would like, they tend to apply heavy pressure to their opponent. When at their best, Vegas creates chance after chance after chance, and eventually the dam breaks. Sometimes from goals in close, other times from a bit further away. In such a small sample size of just seven goals, there’s certainly not enough data to say the Golden Knights can’t score in close against the Wild. If anything, their ability to score further away from the net may mean they’ll score even more when the closer goals come.

Defensively though, there is enough data over the five games to show that the Wild are capable of getting to the dangerous ice out in front of the goalie and winning battles to stick the puck in the net from close range. These are the types of goals a playoff team can rely upon and the Wild have been getting them against the Golden Knights.

If Minnesota can score in close, and they can steal a few goals here and there in transition, they could pose a bit more of a threat to the Golden Knights than most expect over the course of a full playoff series.

Luckily for Vegas, there are still three games left to sort this problem out. Tonight is the final game at home against the Wild before Vegas heads north on May 3rd and 5th.

Protecting “the house” should be a primary focus for the Golden Knights over the course of those three games. If they can do it, Minnesota’s offense will probably dry up, and the Golden Knights should be able to once again assert the dominance over the Wild most expect. If not, we could be in for a Wild (get it?) series in the first or second round.