George McPhee made waves this morning when he placed backup goalie Calvin Pickard on waivers, allowing all 30 other teams the chance to pick him with no compensation to the Golden Knights.

The waves really started yesterday when the Golden Knights claimed in Malcolm Subban off waivers creating a surplus in the net. Subban was described as “not quite ready to play at this level” but McPhee confirmed he would remain on the NHL roster heading into the regular season.

So let’s break this all down. 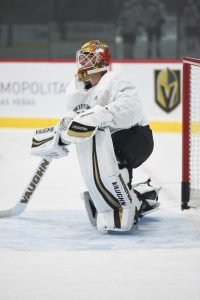 First off, Pickard is now on waivers for the next 24 hours. During that time every team has the opportunity to claim him. If one claim is made, Pickard will become a member of that NHL team. If more than one claim him, he will go to the team who finished worst in the standings last season (identical to the draft order). In the event that he is claimed, the team who makes the move will be in an identical situation to which the Golden Knights were just in with Fleury, Pickard, and Subban, and they would subsequently have to waive another goalie themselves.

Or, none of the 30 teams place a claim on Pickard and he clears waivers. Officially he is then re-assigned to the Chicago Wolves. The likelihood he plays in Chicago is low as the Golden Knights have multiple goalies there already and are clearly higher on Subban than they are Pickard. Instead, if he clears a he would probably be traded. Once Pickard clears, his trade value goes up to every team in the NHL as the risk of losing him on waivers is removed. Pickard’s new team would be able to immediately assign him to their own AHL team and plenty of time to figure out what they want to do with the two goalies currently on their roster.

But let’s get to the big question, why would McPhee do this?

Well, first off, something had to be done before tomorrow’s opener as the team’s top-line center, Vadim Shipavchyov, is technically not on the NHL roster. A spot had to be open somehow, this move does just that. Shipachyov is not at practice, but he will be added once Pickard is claimed or clears.

This necessary roster spot plus the Golden Knights surplus of goalies may have been the reason a trade of Pickard was hard to come by. Opposing GM’s understand the Golden Knights situation and knew something needed to be done. Plus, they all just submitted their rosters to the NHL and 24 of them either had a game last night or tonight. So, GMs would be much more likely to complete a trade for a player who has already cleared waivers, rather than one who needs to.

On it’s face, a trade of Subban for Pickard would not have looked that crazy, and in theory that’s what happened. But because it happened 24 hours apart, the Golden Knights appear to be wasting an asset by placing Pickard on waivers. At 9AM tomorrow we will know what happened with Pickard and the waiver process, but until then, this is the best we can do to explain the situation.

Man, this team is crazy.