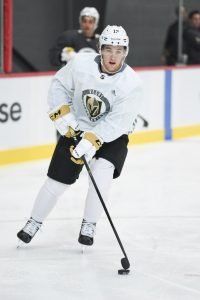 When you look at the back end of the roster for the Golden Knights there is a group of about seven forwards all vying for a one, possibly two, spots. Of the players in the running to leave camp with that 12th or 13th forward spot, one of them has been absent recently.

That man is Brendan Leipsic, the diminutive forward the Golden Knights selected from the Maple Leafs in the Expansion Draft. He was not skating during the most recent session of practice at City National Arena due to an injury that dates back to Thursday.

He had a minor injury last game in the warm up. He’s going to be five or seven days, no more than that. So it’s nothing major. -Gerard Gallant

That kept Leipsic out of the third preseason game in San Jose, and he was also not in the lineup for the game in Colorado. The injury will certainly keep him out of today’s game in Anaheim, and very well could see him miss Tuesday and Thursday’s preseason games at T-Mobile Arena.

Gallant has made it clear that he wants his roster to be nearly fully formed by the final two preseason games, and with Leipsic not having a chance to perform in a game, his spot on the roster is in serious jeopardy, no matter than his coach is saying in press conferences.

We never cut guys because of injuries. It’s nothing serious, so he’ll do some off-ice stuff the next few days and then he’ll get back on the ice. It won’t eliminate his chances for sure. -Gallant

However, the play of Tomas Hyka and Tyler Wong should have Geroge McPhee and Gallant thinking. All three of forwards play a similar style of game based on speed and scoring. It’s unlikely the Golden Knights will be willing to keep more than one player like these three, so Leipsic’s absence isn’t easily overlooked. 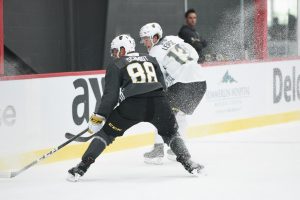 See ya in 5 to 7 days my friend. (Photo Credit: SinBin.vegas Photographer Brandon Andreasen)

Wong scored a hat trick in the preseason opener and Hyka has scored in every game in which he’s dressed for the Golden Knights (including a pair of rookie games in El Segundo).

Coach may not cut players because of injuries, but he’s also probably not in the business of taking jobs from guys playing well in favor of ones who haven’t been able to get on the ice. We have no idea where each player stands, but if it’s close, which we believe it probably is, Leipsic needs to get back out there by Thursday, and needs to perform when he does.