It’s been an interesting start to the season for Evgenii Dadonov. A player acquired by the Golden Knights this offseason as a potential solution to the scoring droughts, Dadonov’s impact will be judged almost exclusively on point production.

His first couple weeks in Vegas were underwhelming. He posted just one assist (on a meaningless goal late in a blowout vs LA) in his first five games as a Golden Knight and he was nearly invisible on the ghastly power play. 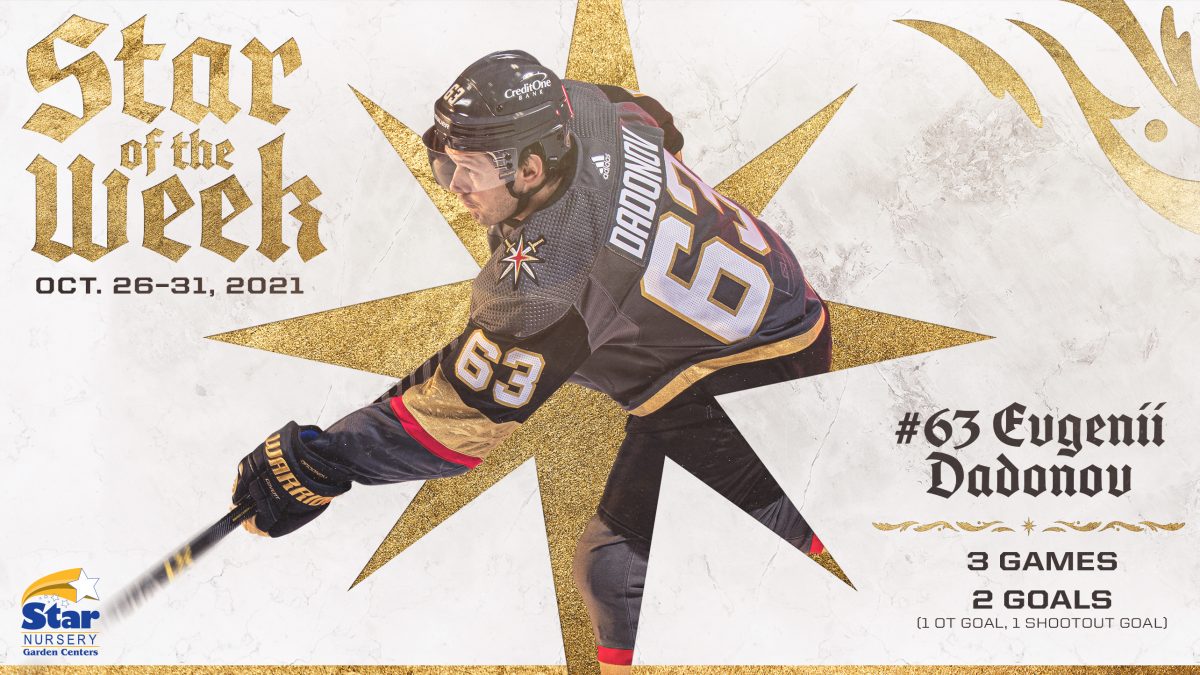 Then, things turned around. In the next five he scored a pair of goals, added an assist, and notched a game-winner in shootout. The most recent six games have have seen Dadonov score three more times, giving him five goals and eight points on the season.

Over that time, a lot has changed with the Golden Knights roster, and you can clearly see it when you look through the line mates Dadonov has played with. In his first five games in Vegas, he never played on the same line in consecutive games and played with five different line mates.

As he’s settled in with players, he’s found success. In the his first seven games with new linemates, Dadonov posted just one assist and was goal-less. In games with repeat linemates, he has three goals and two assists.

It’s not just who he’s playing with though that’s impacting his output. It’s how often.

Dadonov has played in 16 games this season. He’s played 22 or fewer shifts in 11 games. In those 11, Dadonov has not scored a single goal, has added just two assists and amassed a 0 rating. In the five games in which he’s reached at least 23 shifts, he’s scored all five of his goals, notched one assist, and has posted a +4 rating.

It’s just a few extra shifts, but that added minute or two has really mattered for Dadonov’s production so far in Vegas.

There are really two ways to look at this. First, with all the injuries, Dadonov is likely to be relied upon a little more over the next few months, which means the production from the last 11 games should be more of the norm than the first five. On the flip side though, once the Golden Knights do return to health, it’s likely Dadonov’s role will slip to a third line winger, which will mean a decrease in time on ice.

Even with Jack Eichel in the fold, the Golden Knights are going to need Dadonov to produce in the postseason. He was brought here to score goals when others can’t, and do it while playing a bit further down the lineup than he’s been used to.

It’s a small sample size, but so far Dadonov’s production has been minute and linemate reliant. When he’s played for longer stretches with better players, he’s scoring in bunches. When he’s been relegated to the third line with spare parts, he goes quiet. This isn’t horribly surprising and is almost expected for any player, but Dadonov was specifically acquired to be immune to this issue.

The Golden Knights have plenty of time to figure out if this is a momentary thing or if this is what they should expect to get out of their 32-year-old offensive reinforcement. If he needs the minutes to score, or has to play with elite playmakers to put up points in the postseason, they better find someone else to produce down the lineup, otherwise, he’s end up being a main contributor to the scoring droughts he was brought in to fix.