Learning From VGK vs DAL In The Round-Robin 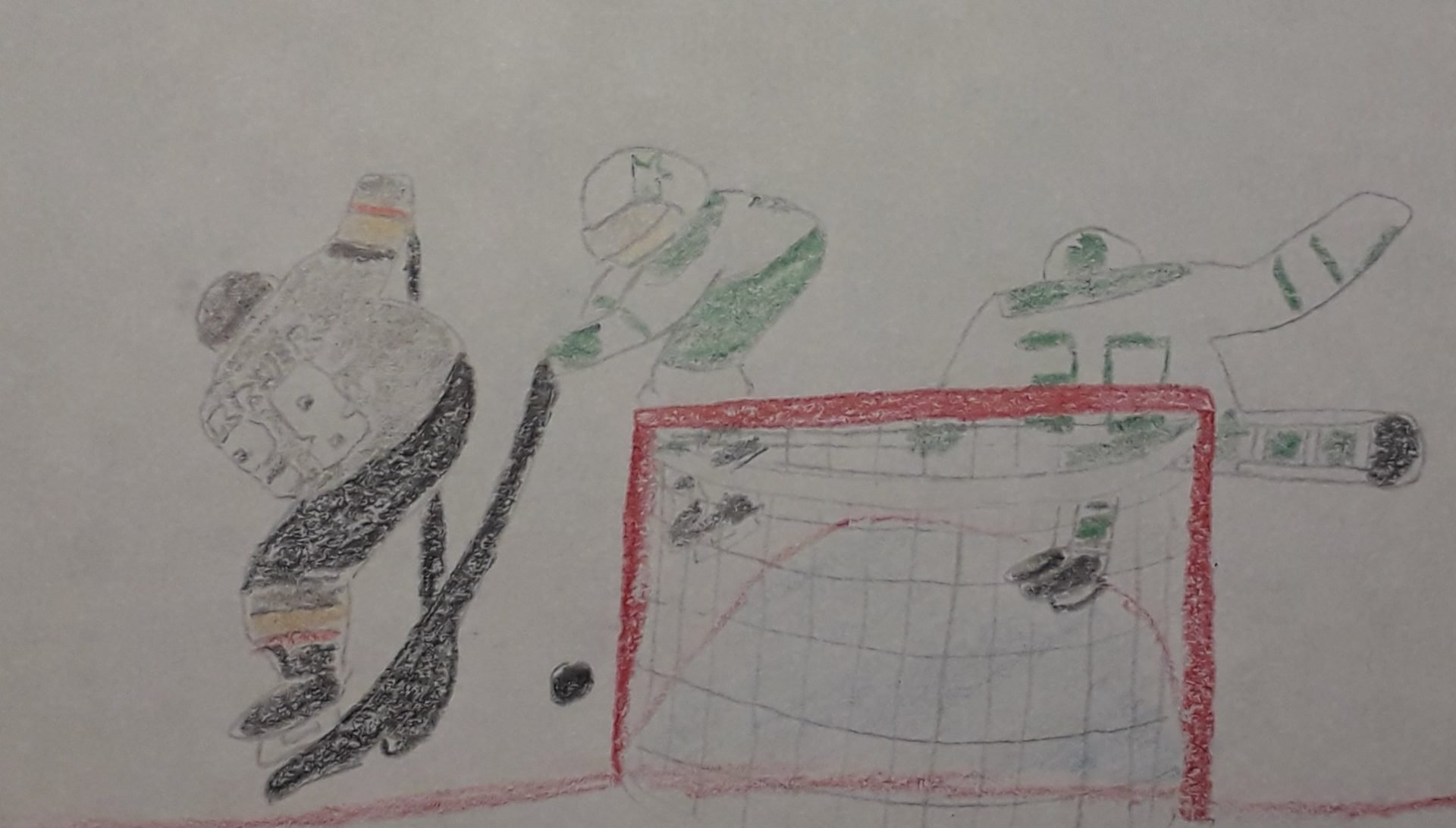 It’s only one game and it was a month ago, but in the wacky world of the 2019-20 NHL season, the round-robin game against Dallas on August 3rd gives us our best look into what’s to come in the Western Conference Final.

In that game, the Golden Knights scored on the second shift of the game. A goal by Chandler Stephenson got the ball rolling for Vegas who would hold the lead into the early 2nd. That’s when things went haywire for the Golden Knights as they allowed three straight goals inside of a five-minute span including a power play tally that at the time looked like it might bury VGK’s chances. In the 3rd though, Vegas stormed back with two to tie it, then another to take the lead, and then the empty netter to seal the deal.

It was a wild game that saw both teams carry play for extended periods. Here’s what I learned from that game and how I think it could preview some of what we’re about to see starting tonight.

The first Golden Knights goal was actually very similar to one we’ve seen before in a Vegas vs Dallas matchup. In the round-robin, Vegas steamed the puck through the neutral zone to William Karlsson. He carried it into the zone and bought a bit of time as Chandler Stephenson rushed up the ice using his speed to create a Grade A opportunity. In the December game at Dallas, the play to create space for Stephenson was made through the neutral zone by Max Pacioretty. But in both cases, Stephenson’s speed in transition with the help of excellent plays by his linemates created goals seemingly out of nowhere.

The Golden Knights’ next two goals were also born out of transition. A quick up through the neutral zone followed by a nifty play by Nick Cousins set up a goal from Mark Stone. Then a 2017-18 special led to the third Golden Knights goal. The old top line of Karlsson, Smith, and Marchessault took advantage of a broken stick by Dallas to create an odd-man rush. Even though it wasn’t played to perfection, the opportunistic Schmidt jumped in and buried the chance.

It’s not really the Golden Knights M.O. anymore, but transition chances remain one of the best ways for this team to score. If they can create a few early in the series against the Stars, they could easily take an early series lead yet again.

During that round-robin game, the Golden Knights held the Stars without a shot on multiple extended stretches. There was an eight-minute shotless run in the 1st which led to a stretch of more than 12 minutes in which Dallas got just two shots within seconds of each other. Then a 13-minute stretch in the 3rd where the Stars watched Vegas score three times between their shots on goal.

However, on multiple occasions, the Golden Knights lived in the Dallas zone without creating any second chance opportunities. Dallas didn’t collapse the zone nearly as much as the Canucks or Blackhawks did in their games against Vegas, but spending minutes at a time hemmed in, they were not necessarily under siege until the puck came out of the zone and Vegas returned with speed.

It wasn’t until after Vegas tied the game thanks to a trio of goals off the rush that the Golden Knights finally created one off the cycle. It came from a shot from the point ricochetting off the back wall to a wide-open William Carrier who put the puck between his legs into the net. But, even on that one, Vegas had to contend with a goalie interference call that easily could have gone the other way.

All in all, it was a microcosm of the issues Vegas faced in Games 5, 6, and 7 against Vancouver and Game 4 against Chicago. The four times in the past nine games have gotten all the headlines, but there’s no question this is a part of the VGK DNA, and it’s not a good trait.

Unlike Chicago and Vancouver, Dallas is physical enough to win puck battles against the Golden Knights. In the 2nd period of the round-robin game they were feasting on the Golden Knights along the boards. In all three zones when the puck was pushed up against a wall, Dallas came out with it. In 37 periods through the first two rounds, Vegas lost the majority of board battles in a period one time (Vancouver Game 4).

It won’t go that seamlessly against Dallas in a full series. Vegas is going to have to work much harder in the dirty areas to make sure they are either winning the battles or at least ensuring the puck doesn’t come out cleanly when they lose it. The Golden Knights’ defensive system calls for overloading the battles along the walls and supporting with another forward. If they lose a battle clean while deploying that strategy, the Stars will be one easy pass away from a wide-open look.

To explain that a little more, when the puck goes into a corner, the Golden Knights  always want to out-number (or at least even-number) their opponents against the wall. The first player there ties the puck up against the boards and then the next man in for Vegas helps to win it. While this is going on, Vegas sends a third player to collect the loose puck when their two against the wall push it out. That means Vegas has three players crowded down into a tight area away from the center of the ice. It’s great when it works (which it absolutely demolished the Canucks and Blackhawks), but if they lose even one cleanly against Dallas, who are capable, it could end up in the back of the net.

Both teams are built to forecheck. They have wingers with both speed and size, they have responsible centers, and they have mobile defensemen that can help support the forwards to create a unified forecheck. In the round-robin game, both teams succumbed to the other’s forecheck on many occasions. The most notable one was the sequence which led to Dallas’ second goal.

First off, it feels like there are Stars players everywhere when this play is actually being played at even-strength. They win multiple pucks along the walls, keep the puck moving, but lose possession along the half wall. In fact, if you freeze it, there’s a moment where Vegas has possession of the puck in a 3-on-1 (Dallas has a guy laying on the ice in the area I’m not counting) and their forecheck comes in to save the day. Here’s that moment. 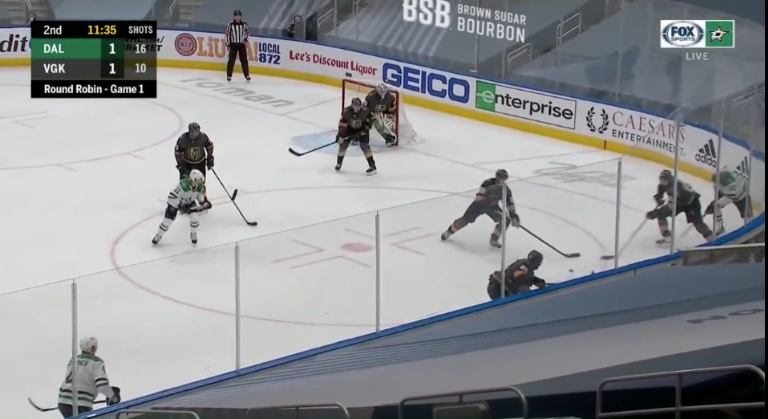 That’s where Miro Heiskanen comes into play as the mobile defenseman that supplements the forecheck. The puck is won back to him, he’s #4, at the blue line and he’s surrounded by four Golden Knights, many of which are hoping to flee the zone. He sends a little saucer pass back into the zone and Vegas is completely caught out.

It’s a combination of tenacious forecheck, relentless pressure off their cycle, and an excellent play by a stud defenseman to set up a pretty easy goal (ok, fine, the shot was unreal too).

All this being said, Vegas has the ability to do the exact same thing at the other end. Mark Stone is a kleptomaniac of pucks (thanks to Pierre McGuire for that term, but do we know where Thatcher Demko grew up?) and the rest of the Vegas forwards forechecking skills give the Golden Knights the same opportunities to feast on failed breakouts by Dallas. Add in Shea Theodore’s dominance and willingness to stand up at the offensive blue line, and they may have the better of the two forechecking units.

The team that forechecks better will have a major upper-hand in this series.

As I said, this is a lot to pull from just one game, but it was technically a playoff game, so we’re going with it.