Las Vegas Is An NHL Town; Can It Be A College Hockey Town?

Late in my chat with Bill Foley a couple of weeks ago, we got around to briefly talking about high school hockey in Las Vegas and how it was important to launch the sport in town to help grow the game.

Unfortunately, we didn’t get the opportunity to talk college hockey.

This weekend, four NCAA Division I teams — Western Michigan, Connecticut, Air Force and St. Lawrence played at T-Mobile Arena in the 2nd annual Ice Vegas Invitational which was won by WMU, 4-1 over Air Force (Uconn beat St. Lawrence 6-3 in the third place game). It was a nice event and even though it was sparsely attended (Just 1,800 on Saturday), it will hopefully be a forbearer for the future.

My hope is we’ll have the NCAA Frozen Four championship here and perhaps UNLV will one day be a participant once it goes Division I.

Pipe dream you say? A realistic possibility, says me.

Let’s start with bringing the Frozen Four to Vegas. With the NCAA willing to host championship events in cities that have legalized sports betting — Yeah, Vegas qualifies! (LOL) — the possibility exists that a Frozen Four could land here.

With the hotels, casinos, restaurants, clubs, shopping and temperate weather, Las Vegas would be a great host city. Fans would love to come here for the weekend and root their teams to the title. The locals, at least the smart ones, would be part of a likely sellout crowd. The Golden Knights would obviously be on the road for what would correspond to the final week of the NHL regular season. But that’s easily done. 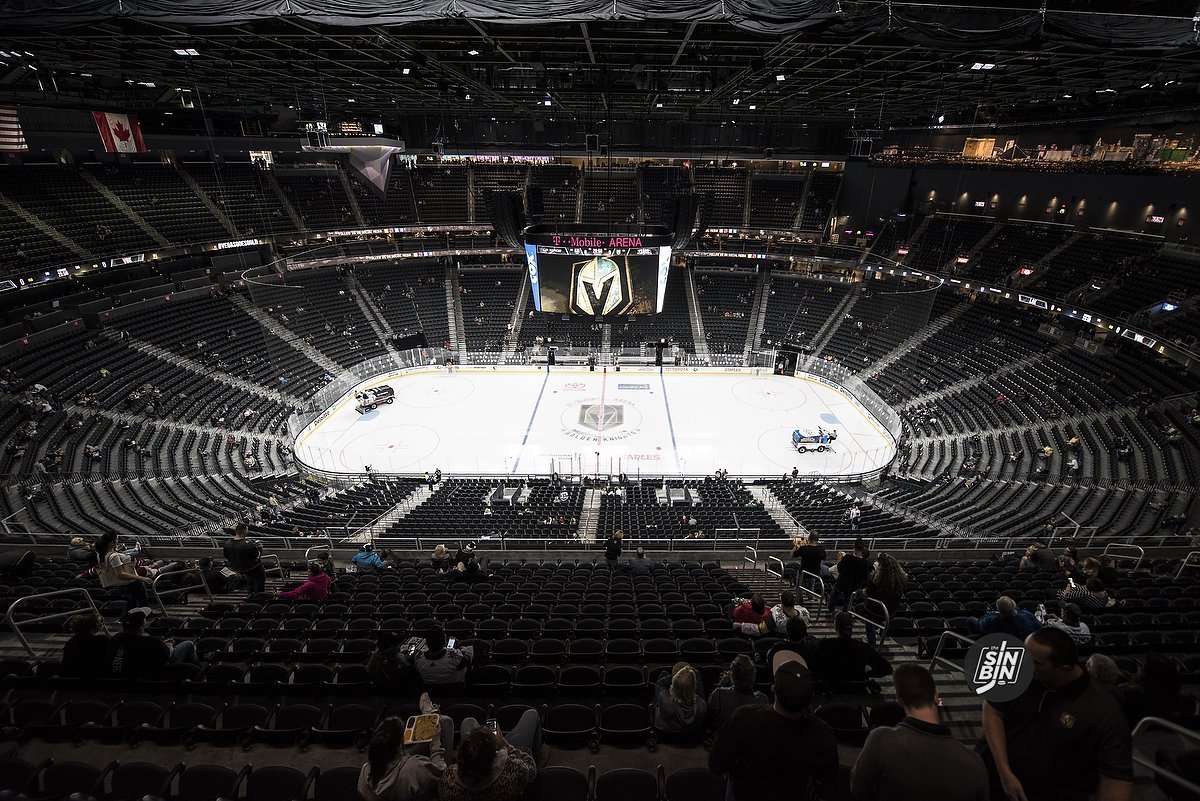 Unfortunately, they would also be out of town the second week of March as the Pac-12 basketball tournament takes over the T. So two of the final four weeks would see the Knights on the road, and if they are in a battle for a playoff spot or division title, being away from home could potentially prove problematic.

But the overall good of the game would trump any inconveniences. College hockey has been a proven breeding ground for future NHL players. Just look at the Golden Knights’ current roster — Nate Schmidt and Erik Haula (Minnesota), Alex Tuch (Boston College), Max Pacioretty and Jon Merrill (Michigan), Brad Hunt (Bemidji State) and Paul Stastny (Denver) all played collegiately. Having the Frozen Four would no doubt motivate local kids to pursue the game at a higher level and try to get to the NHL through the college route.

Which brings me to UNLV.

As most of you know, the Rebels have been skating as a club program for over 15 years. They currently play at the Division I level of the American Collegiate Hockey Association. They sell out City National Arena and they have a strong following, both on campus and in the community.

You may also know the program is aspiring to go varsity, and do it soon. They were making some headway with then-president Len Jessup and then-athletic director Tina Kunzer-Murphy. They had secured some of the $15 million the team thought it would take to go varsity, including providing funding for a women’s sport, most likely lacrosse, though hockey wasn’t completely out of the question.

For UNLV to add a men’s sport, it would also have to add a women’s sport to comply with Title IX regulations. Or it would mean replacing one existing men’s sport with another. And given the school’s sparse number of men’s programs (basketball, football, baseball, soccer, golf, tennis and swimming/diving), it’s unlikely hockey is replacing any of those.

But Jessup and Kunzer-Murphy are no longer at UNLV. There is an interim president and the current AD, Desiree Reed-Francois, isn’t in a position to make the call to make hockey a varsity sport. I’m not sure it’s even on her radar, given the woes of football and men’s basketball, not to mention the overall apathy and indifference toward the university’s sports programs that is making her job all that much harder to succeed.

She did tell the Review-Journal’s Ed Graney that she knows about the club hockey team and she has even attended a couple of games. So maybe she is in the team’s corner in pursuing varsity status.

Here’s what I know: College hockey is cool. UNLV has been winning consistently the past few years. The students show up. The community is behind the program. Team general manager Zee Khan, head coach Anthony Greener, assistant coach Nick Rabone and club president Arturo Castro are doing things the right way. Maybe elevating the hockey team to NCAA D-1 is just what the university needs to give its athletic department a shot in the arm and get people interested again overall.

I could envision 6,000 people showing up to the Orleans Arena on a Friday night to watch UNLV play Arizona State or Air Force. When North Dakota and Minnesota played at the Orleans back in late October, the place was sold out, the atmosphere was electric, and that was without either school’s band and the crowd predominantly for North Dakota.

If you find the time, watch the Frozen Four on ESPN come April. You’ll see what I’m talking about as far as atmosphere goes. It’ll be crazy.

And that’s what Las Vegas should look forward to hosting in the future. Don’t judge the city’s interest in college hockey by the Ice Vegas Invitational. It’s not the Frozen Four. It wasn’t promoted much. The Knights were playing Friday night in Anaheim and many people elected to stay home or go to their favorite bar to watch VGK.

The Frozen Four is a completely different animal. The NCAA puts its full marketing might behind it. ESPN televises it. The sports books take bets on it. The fans from the competing schools show up in droves. It’s precisely the kind of event Las Vegas Events likes to get involved with and hopefully Pat Christenson and the LVE folks will make a strong bid to host the 2023 Frozen Four when bids are being accepted come August.

Notice a common thread? All are established NHL cities. All have great hockey followings and support the game.

Las Vegas Events actually put in a bid two years ago, but the NCAA rejected it because the city’s sports books were still accepting bets on college sports and at the time, the NCAA hadn’t lifted its ban on bringing championships to cities that had sports betting.

Las Vegas Events has a broad plan. Along with bringing the Frozen Four to town, It includes hosting a men’s basketball regional and a wrestling national championship. It also has flirted with the idea of hosting the entire women’s basketball Sweet 16 at T-Mobile, Mandalay Bay, the Thomas & Mack and the MGM Grand Garden. That’s actually a cool idea and one that could actually work. Why bring four teams to town when you can bring 16?

Bidding on a men’s basketball Final Four is a separate process. And with the Raiders’ new stadium, that is something you can expect LVE to pursue.

But back to hockey.

The Ice Vegas Invitational is returning in 2020. Let me start banging the drum today for a goal of 6,000-7,000 fans per night next January. The event organizers have reached out to Golden Knights president Kerry Bubolz about the team taking a more active role to promote it.

Could the team help? Absolutely.

An email blast to the season ticket holders is a good start. Maybe offer a BOGO (buy one get one) for those season subscribers. Some advertising on the telecasts and broadcasts. Nothing heavy-lifting mind you. Just help grow the game, which is part of the organization’s mission.

Ultimately, it’s up to the event’s organizers to do a better job of getting the word out if they want to get more than the 2,000 or so which they got each of the last two nights. Our youth hockey community is one of the fastest growing in the entire nation. Get them involved. Hockey is part of the junior high physical education curriculum in the Clark County School District. How about discounted tickets to the junior high kids and give them a look at the game in person?

You don’t need to open up the balcony. But it sure would be nice for the teams that compete in next year’s Ice Vegas Invitational to emerge from their locker room and have more than family and friends in the stands to watch them play. We’ll save the balcony seats for the 2023 Frozen Four.