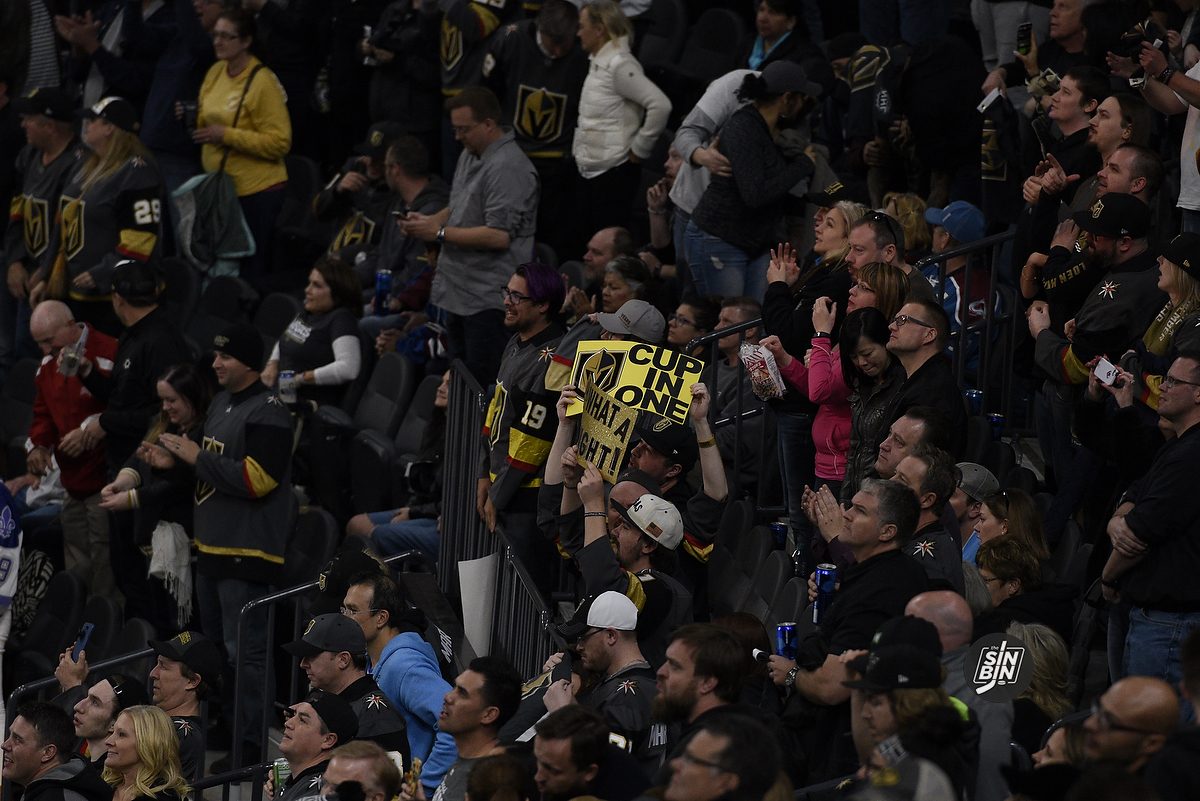 It should come as no surprise that the #1 tourist destination in the world has also become one of the top destinations for visiting fans to come cheer on their home team. Fans from New York, Detroit, Chicago, Edmonton, Philadelphia, Toronto and many other cities have come in droves and at times turned T-Mobile Arena into somewhat of a neutral site, at least fan wise.

However, the 80/20, 70/30, even 60/40 splits have actually turned T-Mobile Arena into one of the most intense buildings in the NHL… in the regular season. It’s all fun and games when 5,000+ fans from another city come in for a somewhat meaningless game in the regular season, it’s a completely different story if it happens during the playoffs when the Golden Knights will need every tiny little bit of advantage the home-ice brings.

VGK Full Season Ticket Members will be automatically enrolled in the “Knights Vow,” which provides the most significant price savings off the single game ticket price.

As part of the Knights Vow program, members will receive tickets electronically via FlashSeats shortly after dates/times of the first-round home playoff games are set

Resale through StubHub – the Golden Knights exclusive, authorized secondary partner – will not be available under this option

In other words, season ticket holders get a discount on playoff tickets if they take a “vow” that they will not sell their tickets on StubHub. Or they can opt out and pay more yet retain the rights to sell.

How do they actually do this? Well, Golden Knights tickets are only available using an app called Flash Seats. To list a ticket on StubHub to a Golden Knights game, you must log in to Flash Seats and upload the ticket, before you sell it. So, if the Golden Knights restrict the resale of a ticket on Flash Seats, it’s ineligible to be sold on StubHub. Fans can sell them on other marketplaces such as Craigslist or other third party ticket sites, but taking out StubHub will dramatically reduce the number of resold tickets.

But that’s not all the Golden Knights are doing. Before the tickets hit general sale to the public, season ticket holders will have a chance to buy extras, then half and quarter season members get their chance, then “Can’t Wait List” members, and finally, the Golden Knights will exhaust the list of people who have bought multiple game packages from them. After all that, on April 2nd, whatever tickets are left, which will likely be less than 1,000, will go on sale to the general public. Oh, and every single ticket purchased through each of these avenues cannot be resold.

Our playoff ticket options reward the loyalty of the most passionate, committed and ardent Vegas Golden Knights season ticket members with preferred pricing and a flexible payment option that gives fans the opportunity to pay once the round is complete, We have had the best in-arena atmosphere in the NHL this season and we will look to take that to another level come playoff time. -Kerry Bubolz

Only time will tell if these measures will indeed keep out Kings, Ducks, Sharks, etc. fans who attempt to come to playoff games at T-Mobile and cheer against the Golden Knights. However, no matter what happens, you’ve got to hand it to the Golden Knights for taking a chance with a program that’s never been seen before.

Now, it’s up to Golden Knights fans to take the “Knights Vow.”