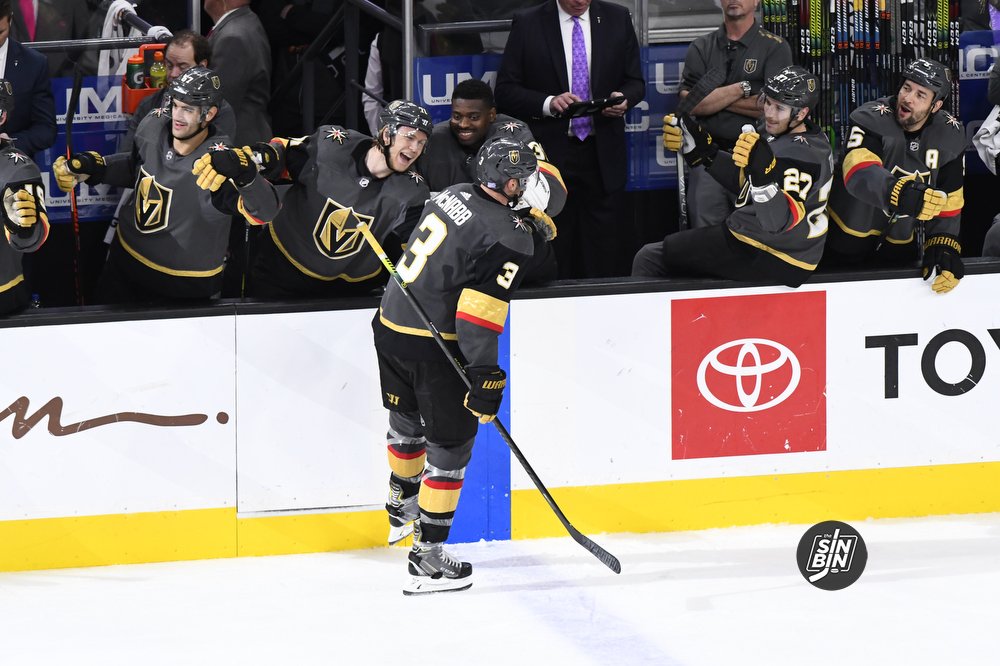 Last year was full of excuses including Nate Schmidt’s 20 game suspension, injuries to Cody Eakin (3 games), Alex Tuch (8 games), Paul Stastny (happened in Game 3), and Erik Haula (happened in Game 15). This year feels a little different, though there have been some similarities. Schmidt missed 12 (13 if you include the one he got hurt in), Tuch 17, Eakin 4, and Malcolm Subban 9.

As players worked their way in and out of the lineup each season, consistency was the main issue. Some nights they’d play well, others they wouldn’t, and there’s really no guessing which night would be which.

Last year’s team turned it around right about this time. They won five straight and won 10 of 13 from Games 23 to 35. That likely led the front office to back off and be patient with their second-year team. This year, that stretch has yet to come and there’s starting to be a sense of panic among the fan base. Upstairs though, that’s not the case… at least not yet.

Kelly McCrimmon hasn’t spoken to the media much this year, but when he has his message has been the opposite of his team’s play, consistent.

Well, I think we’ve been a little inconsistent. We’ve had stretches where we’ve played pretty well but haven’t been able to sustain it the way we’d like. As a result we’re in a clump of teams that are trying to find their way here a little bit. We expect we’ll get better as we move along but we’ve been inconsistent. –Kelly McCrimmon to Oilers NOW on 11/22/19

We’ve liked a lot of things about our team. I think the one area where we’d like to be better is just our consistency hasn’t quite been to the level we’d like it to be. When I look around the League, there’s probably a few teams that share similar thoughts. –McCrimmon to NHL.com on 11/11/19

Both interviews came directly before rough patches as Vegas lost five straight following the NHL.com one and are currently on a two-game drought following the Oilers NOW interview, but the message has remained steady. In fact, it wasn’t just that question that elicited nearly identical responses in both interviews.

We’re like a lot of teams, there are all different ways we can improve our team in terms of personnel but when you are a cap team your hands are a little bit tied with respect to that. I think personnel-wise we’re pretty comfortable with our team and like every other team we’ll evaluate opportunities that might present themselves along the way and if there’s something that makes sense that we think can improve our team we’ll definitely look at it. –McCrimmon to Oilers NOW on 11/22/19

Well, we’re a cap team, so that dictates a little bit what we can do or we will do. But I think like a lot of teams, you watch, you observe. You know there are areas where you can get better, and you see how the year plays out. –McCrimmon to NHL.com on 11/11/19

He also had matching comments on the Pacific division, including sharing the exact same story in both interviews, and another one in between.

I spoke on it the day the NHL regular season began, I did media availability and was asked about the Pacific and I said at that time if I had to describe the Pacific Division in a word I’d say ‘improved.’ And I think that’s really shown to be the case. –McCrimmon to Oilers NOW on 11/22/19

In my media availability prior to the season opening, I said that if I were to describe the Pacific Division in a word, I would say `improved.’ Clearly, that’s exactly how it’s playing out. –McCrimmon to The Athletic on 11/7/19

In my media availability prior to opening day, I made the comment that if I was to describe the Pacific Division in a word, I would say ‘improved.’ That’s exactly what you’ve seen. –McCrimmon to NHL.com on 11/11/19

This isn’t meant to pick on McCrimmon for using the same answers, instead, the reason I point it out is to show how steadfast he and the front office have been through the rollercoaster ride that has been this season.

Whether it was asked prior to the year, a month in, or a few days ago, the answers have not changed. They have a plan, and they intend on following it, even if the results aren’t there on any given day.

This is a process-driven organization that believes if you consistently do the right things, results will follow.

That being said, they have changed their minds in the past. It just takes a lot for it to happen.

Throughout most of the first season, the answers remained the same that they were building for the future. Even as the team got off to a torrid start, the plan remained unchanged. Then, around Christmas time (all three of McPhee, McCrimmon, and Gallant have told the story), they went from an expansion team mindset to that of a contender. The rest is history.

This year, their minds have yet to change. They believe the team is good and if they stick with it they’ll eventually start winning. And until you start to hear different answers to these same questions, patience will remain the plan.