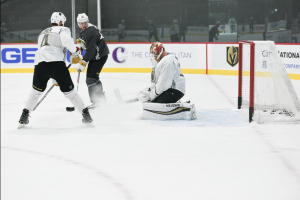 Instantly after seeing the roster for the first preseason game, our eyes went straight to the outlier on the list, Clayton Stoner. On a roster full of young players either headed back to juniors or to the AHL, the 32-year old, eight year veteran of the NHL stuck out like a sore thumb. Our thought was that it spelled bad news for Stoner’s future with the Golden Knights. But, what do we know, we are just some bloggers with a website that couldn’t even afford a .com domain. So, instead of playing “ask the 8-ball,” we went right to the source to see what he thought about his inclusion in the first preseason game.

I think it was just a matter of me not playing a game in a long time. I was hurt since November 15th last year. It was one of those things that they mentioned they wanted to get me in a game early and get on the ice. And get that game feeling back. -Clayton Stoner

The former Duck played 14 games last season, due to an abdominal procedure he had on November 17th. It’s no wonder Stoner was eager to compete on Sunday.

Right now I feel very good. I’m just trying to stay healthy. I’m not as young as I was, but injuries are something that are preventable. I spent a lot of time last season, and the offseason rehabbing. I feel, like I’m in a strong place right now with my body. I feel good. -Stoner

The only bummer to Sunday’s victory was that Stoner couldn’t keep his A-stitched jersey. To his knowledge, it doesn’t exist anymore.

They didn’t give it to me to take home. The trainers probably have it. They probably unstitched the A, ready to give it to someone else. -Stoner

Nevertheless, the 32-year-old was stoked to be one of the franchise’s first Alternate Captains.

It was pretty cool. Being the first game and everything, I know it’s exhibition with a lot of young guys, so it’s one of those things you have to take with a grain of salt. But it was exciting. First time the jersey has been on in a real NHL exhibition game. So I gotta take some pride. We had fun. -Stoner

Oh, and they dominated the exhibition game. Stoner played 18:24 in the game including 4:55 on the penalty kill. Also, his inner Clayton Stoner came out as he beat the crap out of a guy who laid a somewhat cheap hit on him with less than two minutes left in the game. 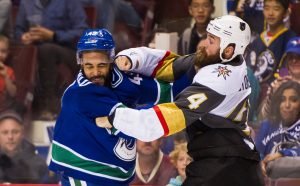 Honestly, Stoner’s reasoning for why he played in the game does make sense, and he genuinely seemed to believe it’s true. So, as we said earlier, we’ll take it from the source directly and slow our roll on “Stoner playing means he’s out of here.” Nonetheless, he’s definitely on the bubble, and it wouldn’t be surprising in the least if he’s not a Golden Knight by the end of the month.