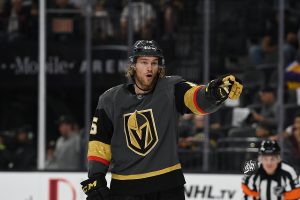 We don’t have a picture of Jon on the scooter yet. (Photo Credit: SinBin.vegas Photographer Brandon Andreasen)

Jon Merrill is a professional athlete.

Last month, after a Golden Knights practice a few us got chance to see him riding in his shiny, new toy.

To shorten his commute, Merrill needed something easy, comfortable and flashy.

I had been walking to and from the rink, so I picked one up as an ulterior motive to walking. -Merrill

The newly extended d-man didn’t waste his money on an expensive sports car, or a Harley-Davidson, or even a hoverboard. Nope, Merrill chose the form of transportation locals cringe at most, the moped.

I don’t really drive it on the main roads. I just go from here (City National Arena) to my house. -Merrill

So if you see someone flying down Pavilion Center Drive at a speedy 30 MPH, it’s probably #15 (or Ken, he has one too).

The boys love it. They’re all jealous, they want one. -Merrill

We thought for sure this was an illusion that can only be created in mind of a scooter owner, but…

I want to get one for the summer. That’s my next purchase. -Luca Sbisa

The European has his eye on a new Vespa. As a kid in Switzerland, Sbisa became familiar at an early age with Merrill’s type of traveling.

A young Luca learned how to get himself around his Swiss town, which began with skateboarding.

You go into skateboards, then mopeds. The guys would put the skateboard on the back and sit on it. Once you got into the scooter phase, you ditch the skateboard. You try to be the cool guy. -Luca

This team never stops stunning us.

UPDATE: This picture was published on the Golden Knights Facebook page on April 24th.

It never gets old that Jon Merrill drives a scooter to practice. (photo from @GoldenKnights) pic.twitter.com/QHu35RRKXR