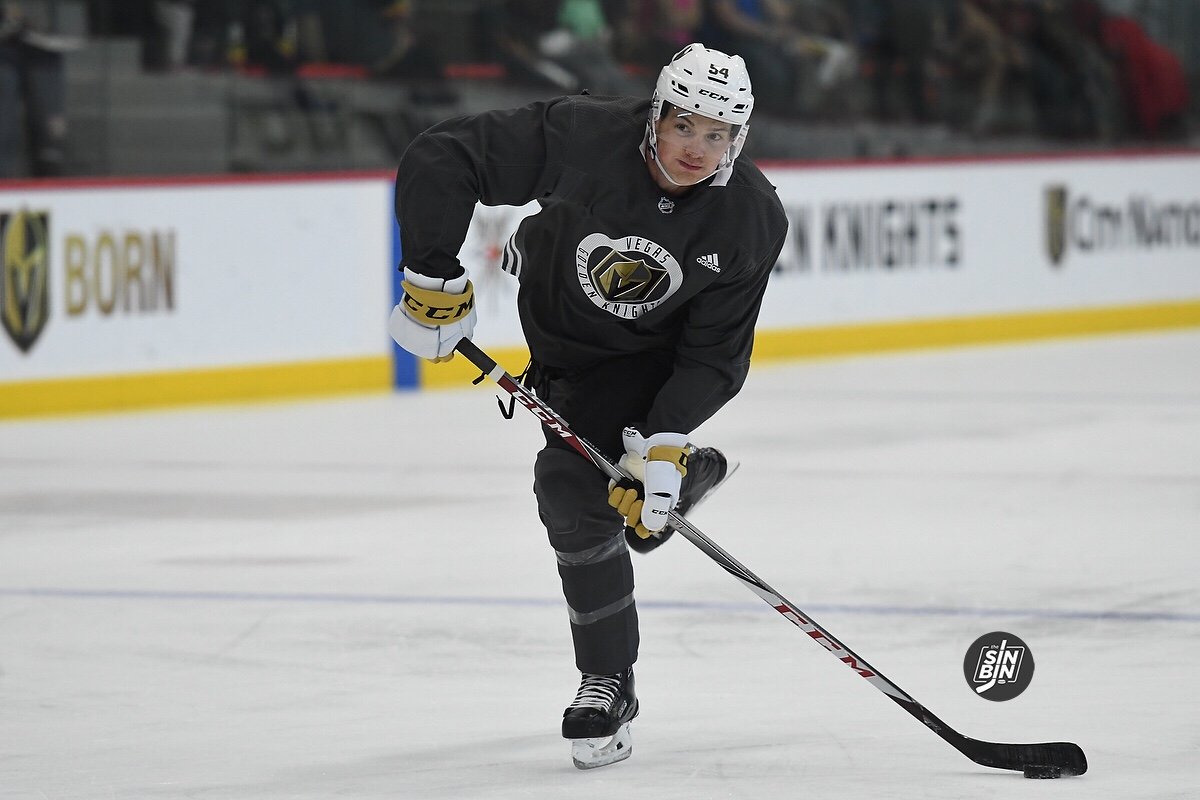 If there’s ever a Jimmy Schuldt sweepstakes, the Golden Knights should be in a good place to win it. (Photo Credit: SinBin.vegas Photographer Brandon Andreasen)

Development Camp has many different purposes. For some, it’s to do as the name suggests, develop. For others, it’s a chance to begin staking a claim to a roster spot. Then there’s the select few for which it can be used as a recruiting trip. That’s the case for Jimmy Schuldt.

A lot of (where to go to camp) goes through my coaching staff in St. Cloud and my advisor. I had been in touch with Mike Levine here, and I knew Wil Nichol from a camp in the past. Those two guys I’ve been in contact with seemed really genuine. Seemed like it was going to be more of a development thing instead of them trying to watch and evaluate guys. -Jimmy Schuldt

When the summer is over Schuldt will head back to St. Cloud State University for his senior year. He’s the captain of a team that went 25-9-6 and were the #1 seed in the NCAA tournament. When the season ends, he’ll become one of the most coveted college free agents available to NHL teams.

Schuldt could have signed with any team following his junior season, but said his heart is in St. Cloud and he doesn’t want to ever regret giving up his final chance at winning a National Championship.

Coming to Golden Knights Development Camp marks the fourth such appearance Schuldt has made. He’s appeared at camps over the last few years in Montreal, Chicago, and New York (Islanders).

Seemed like a really cool opportunity, really excited to be out here. Pretty incredible inaugural season for them and I was excited to come down and test it out. I’d never been out west, so that was a cool thing for me. -Schudlt

He’s hoping to be the next Zach Whitecloud, who is also participating in Golden Knights Development Camp. Whitecloud went to Kings Development Camp a year ago, but decided to sign with Vegas after his sophomore season at Bemidji State when he officially hit the open market.

The coolest process I’ve ever gone through in my life. As a free agent if you do all the right things you get to pick the team that you go to. It’s a fun process because you’ve dreamed of it as a kid. -Zach Whitecloud

Both Whitecloud and Schuldt spoke about the same things when discussing what was important in ultimately deciding where to play.

I think for me just the right fit, the right organization, the right culture. If the culture is the same throughout the players and there’s a lot of character that goes into it, those are the teams that have success. -Schuldt

If you are looking at the money, I think you are in it for the wrong reasons. For me specifically, I’ve always been about opportunity. Wherever I can go to get an opportunity to make the most of it. I wanted to go somewhere that played my style of game and where I felt like I could fit in. The culture here in Vegas was something I had an extremely hard to passing up. -Whitecloud

Whitecloud chose Vegas without having gone through a Development Camp with the organization, the question is whether or not Schuldt will make the same choice come spring of next year.

I like meeting people and building relationships. So I think it definitely will kind of help.  Just to know the people and know the organization, be here personally and get a feel of what it’s like. -Schuldt

Schuldt is the captain of one of the best college teams in the country, and has a real shot at the Hobey Baker award (best college hockey player) in 2018-19. He’s going to have suitors, and due to the CBA, they all will be offering him essentially the same thing.

The fact that he decided to choose to come to Vegas to camp certainly gives the Golden Knights a leg up by familiarity alone, but there’s another aspect of Vegas that speaks to Schuldt as well.

A lot of good opportunities for players that have been passed over and not protected by their teams and that’s something I can relate to. A lot of times I’ve been cut from teams and passed over in the Draft. -Schuldt

He’s already a misfit. He’s already wearing a Golden Knights logo this summer. Now we wait to see if he’ll become a Golden Misfit in the future.