It seems like each day that passes by there’s another piece of positive news on the Jack Eichel front. The most recent is that he has travelled with the team on the road trip starting in Washington D.C. and he’ll continue to assimilate with the Golden Knights’ players and systems as his return nears.

And while Eichel still remains in a no-contact jersey in practice, that piece of good news is seemingly next up and not that far away either.

I get cleared for contact 12-week post-op, so I think that’s beginning of February. –Jack Eichel on Won’t Back Down Podcast w/ Chris Weidman

To be exact, 12 weeks following Eichel’s surgery would be on February 4th, the day before the All Star Game in Las Vegas. 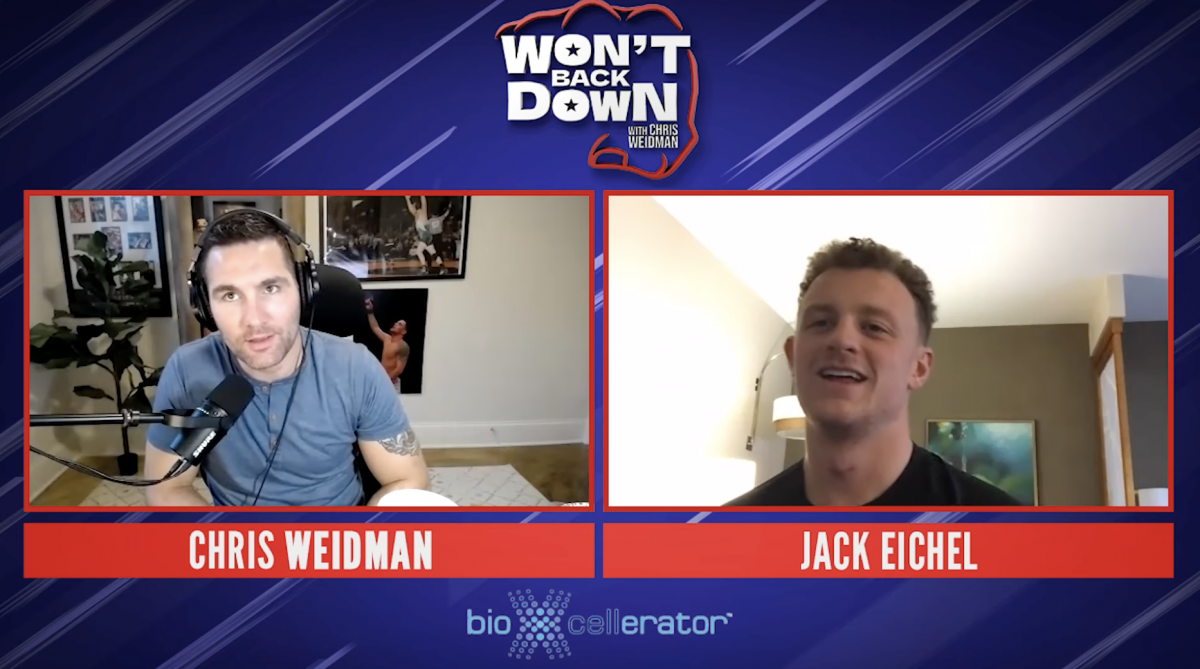 Eichel shared this information on a podcast with former UFC middleweight champion Chris Weidman. Eichel and Weidman, who each underwent artificial disc replacement surgery, chatted about the process of deciding to get the surgery, the operation itself, recovery, and so much more. It’s an excellent conversation for those wondering more about what Eichel went through and why he made the choices he made, but what jumped out most to me was the simple underlying reason why he was so confident in fighting the Sabres until the end.

It’s a fact that seems so obvious, but like many things, can often get convoluted with complexity of professional sports.

The thing that I didn’t really understand and still don’t is, as if I was going to make a decision that was going to compromise my ability to play hockey. My goal is to be the best hockey player that I can be and perform every night. I’m not going to make a decision or do something that I think is going to deteriorate my career. You really just have to become selfish. At the end of the day that’s what I ended up telling myself. I’ve got to be selfish because no one else is going to look after me better than I’m going to look after myself. –Eichel on Won’t Back Down Podcast w/ Chris Weidman

The Golden Knights took advantage of this and pulled off a blockbuster trade for what appears to be an excellent value on a superstar player that wasn’t going to be able to play for at least three months.

It was very refreshing when I went to Vegas. They said, ‘you can do whatever surgery you feel. You’ve had eight months to do your research on what you think is best. You can do your preferred surgery, you can choose the doctor,’ and they were just all supportive. It was very refreshing and I’m very fortunate. –Eichel on Won’t Back Down Podcast w/ Chris Weidman

As he continues to progress, the only real question now is exactly when Eichel will make his Golden Knights debut. The timelines have been wide-ranging from Eichel saying he thinks he’ll play sometime in February to Pete DeBoer calling him months away in a presser in Janaury to Kelly McCrimmon leaving room for it to last nearly to the end of the regular season.

One thing is clear though, and won’t be changing any time soon, now that he’s with the Golden Knights, the control is in Eichel’s hands.

The organization has been really good, they’re not rushing me to come back, but I haven’t played hockey in forever so as soon as I feel I can get back to playing, I’ve been cleared for contact, and I feel good and confident enough to go, I’m going to get back and go. –Eichel on Won’t Back Down Podcast w/ Chris Weidman

And while not even Eichel knows exactly when that will be, it definitely seems to be much sooner than later.