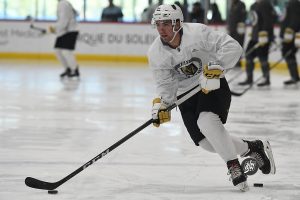 Dugan was selected in the 5th round of the 2017 Draft and has played at Providence College the past two seasons. He led the NCAA in points in 2019 and was widely considered one of the best players in college hockey.

He is currently the #2 ranked skater on the SinBin.vegas Prospect Rankings.

Been waiting a long time for this dream to come true! Blessed to have such a great support system that has allowed me to get to this point. Thank you to everyone who has helped me along this journey. pic.twitter.com/vUaMDg5zZM

It was a unique situation. For me I knew what I wanted to do at the end of my college season. I knew I wanted to sign or join or whatever with the Vegas Golden Knights, I knew that’s where I wanted to be. We were kind of taking it in stride and seeing what was going to happen. -Dugan

McCrimmon says they knew before the end of the 2017 Development Camp that Jack Dugan was a player that should have been drafted much earlier than the 5th round.

They certainly still believe it now after he led the NCAA in points.