There’s been a running theme with the Golden Knights that was almost so obviously to be expected that we almost ignored it. But after William Carrier‘s effort against the Sabres, it’s become a true storyline every night. 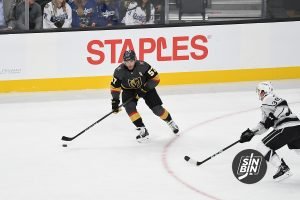 Not sure why, cause I’ve been there many times, but David Perron loves St. Louis. (Photo Credit: SinBin.vegas Photographer Brandon Andreasen)

Against Boston, Vegas defenseman Colin Miller and goaltender Malcolm Subban both took pride beating their former teammates. Miller was +1 and added 3 shots on net. Even more vindicated was Subban, stopping 21 of 22 shots. Earning the goaltender his first career win.

You guys proved it to me, no doubt Carrier played better against Buffalo. –Gerard Gallant

In six games, four times Vegas players have faced their old team. The Golden Knights are 3-1 in those games. And honestly, I doubt Tomas Nosek was anymore motivated than he normally was when Detroit came to town, as he only played 17 games over two years with the Wings.

Tonight, it’s Golden Knights’ forward David Perron’s turn. P-Money (he called himself that, don’t blame it on us) played his first six NHL seasons in St. Louis and one encore season in 2016-17. Perron is always consistent on the ice, but playing his old teammates could motivate him more.

Yeah, you try to move on. It’s not easy, because I felt I had a really good season last year. Not even just stats wise, kinda everything. Gotta move on and try and find something here. -David Perron

Perron has seen the business side of hockey more than most guys. He understands why he is now playing in Las Vegas. However, He’s clearly fond of his old team, and probably assumed he’d play out his contract in St. Louis. One thing I’m sure he doesn’t miss is having to deal with the tough St. Louis media.

What do you know now that you didn’t know about Las Vegas?

There’s Costco, IKEA, everything that would be in St. Louis that regular people would go to. It’s the same thing here. -Perron

I mean, Perron and the Golden Knights better win, or else he’ll have more tough questions to answer.

Has it been easy to settle in?

The weather makes it really nice. Everyday you come out with flip flops and golf shirts.”-David Perron

Who wouldn’t want to leave Missouri for Nevada? Now don’t answer all at once.

Perron’s not the only Golden Knights who played with the St. Louis Blues a year ago. Brad Hunt, who was picked up as a free agent by Vegas on July 1st, might have even more to prove to one of his old teams than Perron. 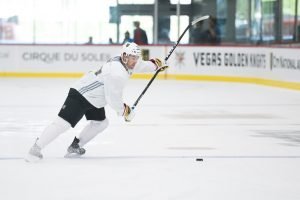 Hunt played nine games with the Blues before he was placed on waivers and eventually snapped up by the Predators.

As we’ve seen with Eakin, Miller, Subban, and Carrier, it certainly can be expected that Hunt would want to stick it to a team that never really gave him a chance a year ago. The problem is Brad Hunt is such a nice guy, all we can get out of him are quotes like this…

I’m just trying to approach it like any other game, it’s just one of those things. You are playing against people you are familiar with, it just makes you want to win that much more because it’s against your buddies. But I’ve had great experiences with every organization I’ve been with, so there’s no bad blood or anything, I’m just going to go out play hard and have fun. -Brad Hunt

It’s just another fresh beginning, you come here and it’s an open slate. You come here, play as hard as you can, and hopefully, good things happen in the end. -Hunt

Everyone’s just playing hockey. Everyone’s having fun and keeping it light. That’s what hockey is all about. -Hunt

And this is why you’ll never find a bad word published anywhere by anyone who’s ever actually spoken to Brad Hunt. He’s just a genuinely nice person who loves playing hockey, and that’s why I truly don’t expect anything special or different from Hunt tonight. I honestly believe he’s going to go out there, try his hardest, and just have fun.