The stunned silence inside T-Mobile Arena Sunday evening was deafening.

Tomas Hertl’s shot from the high slot had managed to elude Marc-Andre Fleury and the San Jose Sharks remain very much alive in this opening round Stanley Cup Playoff series with the Golden Knights following their 2-1 double-overtime win. 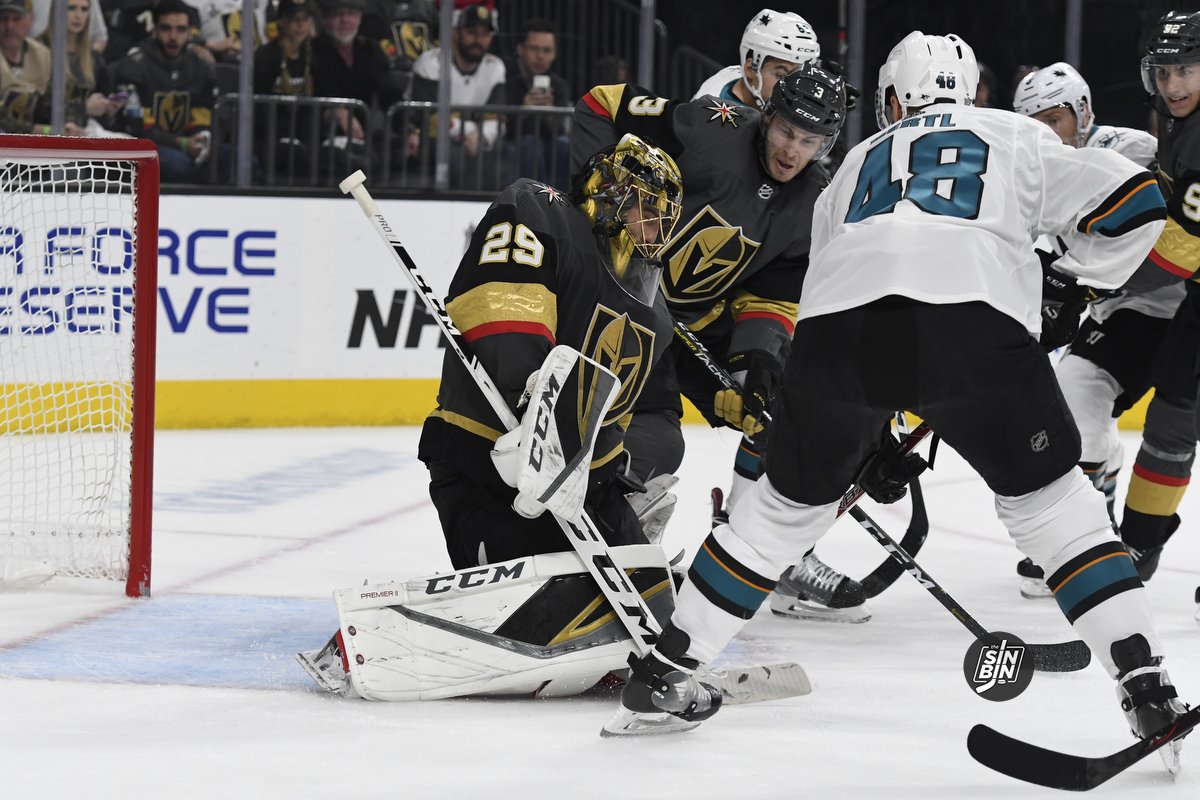 Watching from the press box as the Sharks celebrated, I couldn’t help to think what was going through the minds of virtually all of the 18,458 who had come to watch their team advance to the next round, were expecting handshakes but instead left wondering if this was their last visit to their beloved Fortress.

After all, it had been a strong effort by the home team. They had unleashed 59 shots on the other team’s goaltender. They had dominated play for good portions of the contest. They had spotted the visitors a 1-0 lead with 6.5 seconds left in the first period only to come back to pull even.

So why aren’t we talking about the Knights playing the Colorado Avalanche this morning? Why is there still unfinished business with San Jose?

The Sharks deserve the lion’s share of credit for extending this series to a deciding Game 7 Tuesday. They are a tenacious, opportunistic bunch. Their goaltender, Martin Jones, has rediscovered his game and his coach, Peter DeBoer, stuck with him when everyone was demanding he start Aaron Dell in net for Game 5.

Jones has played great in his last two games and it starts with him when looking for any explanations as to why this series is still ongoing.

I think our group has never lost faith in him. I think we knew he was capable of this and we needed him tonight and he was our best player. -DeBoer

I’m sticking with it and just trying to read the game and play loose for the last few games. Trust my game and trust our team. -Jones

The Knights tipped their cap to the San Jose goalie. What else could they do?

Yeah, we were all over them. We had great pressure and forced a lot of turnovers. Martin Jones was pretty good tonight; you have to give him credit. -Jonathan Marchessault

But it’s not just San Jose’s goalie that has the Knights in this position. Hertl and Logan Couture, two players I had said before the series that the Knights had to contain, have dominated. Couture got the first goal and he has four in the series. Hertl has five goals. As a team, the Sharks have 18 goals, so that’s two guys generating 50 percent of the offense.

Yes, both are tough to play against. But if the Sharks advance beyond Tuesday, they’ll be the reason why.

(Hertl’s) confidence is as high as he wants it. You can see that, and you feed off him. He’s been a huge piece for us -Joe Pavelski

How has this series flipped in the last 72 hours? In the first four games, the Knights’ top line was Paul Stastny, Max Pacioretty and Mark Stone. Combined, they had 12 goals and 28 points. The last two games? Zilch. Stone had a gift 1:25 into Game 6 as he had an empty net to shoot at. His backhand was wide. If he scores, it changes the entire complexion of the game.

Pacioretty also had an open net and it took a great play by Pavelski to deny him as he managed to get his stick on Pacioretty’s at the right post before he could score.

Tomas Nosek and Reilly Smith also had Grade A chances in the opening 20 minutes and both failed to convert. If any of those go in, we’re probably talking about Colorado.

But hockey is as much mental as it is physical. And as we head to Game 7, the onus is on the Golden Knights to reboot mentally and emotionally.

You could see those seeds being planted immediately after the game from Gerard Gallant and his players.

You get ready to play, you forget about tonight, it’s over with now and you move on and get ready for the next one. We played a heck of a game tonight. I’m proud of our guys. The way that they competed; 59 shots on net. It wasn’t our night, but there is still another day for us, fortunately. We will get ready for Game 7 and be ready to go. -Gallant

And this from Marchessault:

We’re confident in the group we have here. We’re a confident group and a great hockey team. Just have to keep going and stick with it. I think if we keep playing the right way, like we did tonight, I think we’ll get rewarded. -Marchessault

And while it is encouraging to see Marchessault and his line starting to generate some offense, it may not be enough. The bottom six need to help with the heavy lifting. Cody Eakin and Alex Tuch have only a goal apiece. Pierre-Edouard Bellemare, Will Carrier and Ryan Reaves have been kept off the scoresheet the entire series.

There’s nothing you can do when flukey things happen. Shea Theodore tried to prevent Hertl from scoring in the second OT and he got his stick on Hertl’s stick a split-second too late. And yes, maybe Fleury should have stopped that one, but that play all started by the Knights’ failure to maintain possession while on a rare OT power play. So if you’re looking to assign blame, you can point to all six players on the ice for Vegas.

But what’s done is done. As the players said afterward, you turn the page and you move on. But the stakes are obviously raised at this point. There’s no more cushion to fall back on. No more house money to play with. It’s one game, winner take all.

So why will the Knights win?

For starters, they’ve already won a playoff game with this lineup in San Jose. They will not be intimidated by the frenzied atmosphere inside the SAP Center.

They continue to generate chances. It’s a matter of putting them away. They are still the faster team and while Jones has apparently got his confidence, let us not forget he was out of position on several occasions in Game 6 and had the Knights managed to convert on any of those opportunities, we may not be talking about how great he looked. 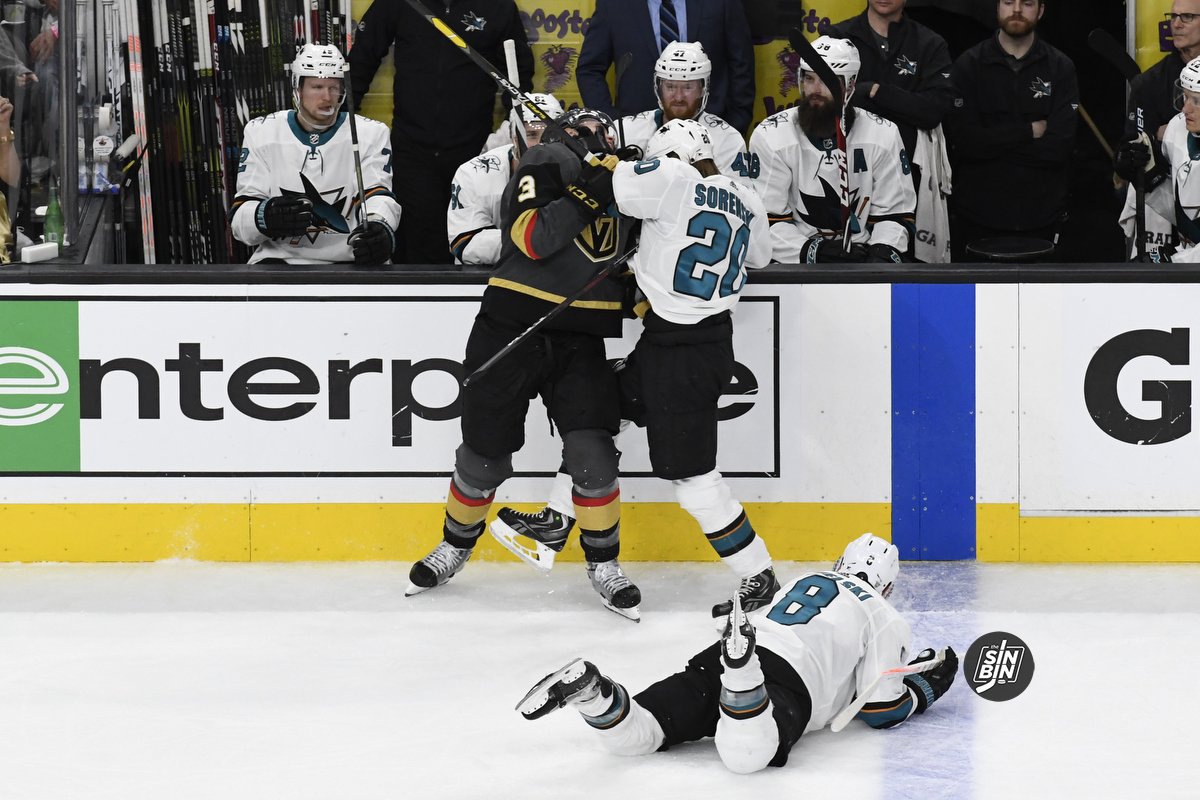 Mentally, it sounds like the Knights are in a good place. They are focusing on the positives they took from Game 6 and there are enough veterans in the room to keep things upbeat. They don’t appear to be a beaten team emotionally. How they channel that emotion will be critical to their success in Game 7.

And that’s the beauty of Game 7s. You don’t need any additional motivation. You can put everything that happened before behind you. There’s no looking ahead either. Your focus is on one game.

This is unchartered territory for this franchise but they have guys who have played in Game 7s before, most notably Fleury. His temperament is perfect for this kind of pressure-cooker environment. He will keep things loose in the locker room and I expect him to come up big. He’s still the better of the two goalies in this series. And as I said prior to Game 1, it’s all about goaltending in the playoffs. If the Golden Knights are going to be on the right side of the handshake line Tuesday night, it’ll probably be because of No. 29.

To me, the Knights are still the better hockey team. They just haven’t gotten the desired results these last two games.

Many of you believe this series is over. I saw your tweets. I heard your comments leaving the building Sunday. If you feel that way, I suggest you make a bet on San Jose using the William Hill Mobile Sports app and try to recoup some of your financial investment.

As for your emotional investment, I say trust your team. Sure, it’s disappointing for you to have your team squander two opportunities to advance. But there’s still one more chance. And that is the beauty of sports.