It’s All About The Goaltending

Before the opening-round playoff series between the Golden Knights and the San Jose Sharks had begun, I pointed out that Vegas would win and it would do so because of superior goaltending.

Hey, I’m no Scotty Bowman, but you didn’t need to be to know that Marc-Andre Fleury was better than Martin Jones and/or Aaron Dell. 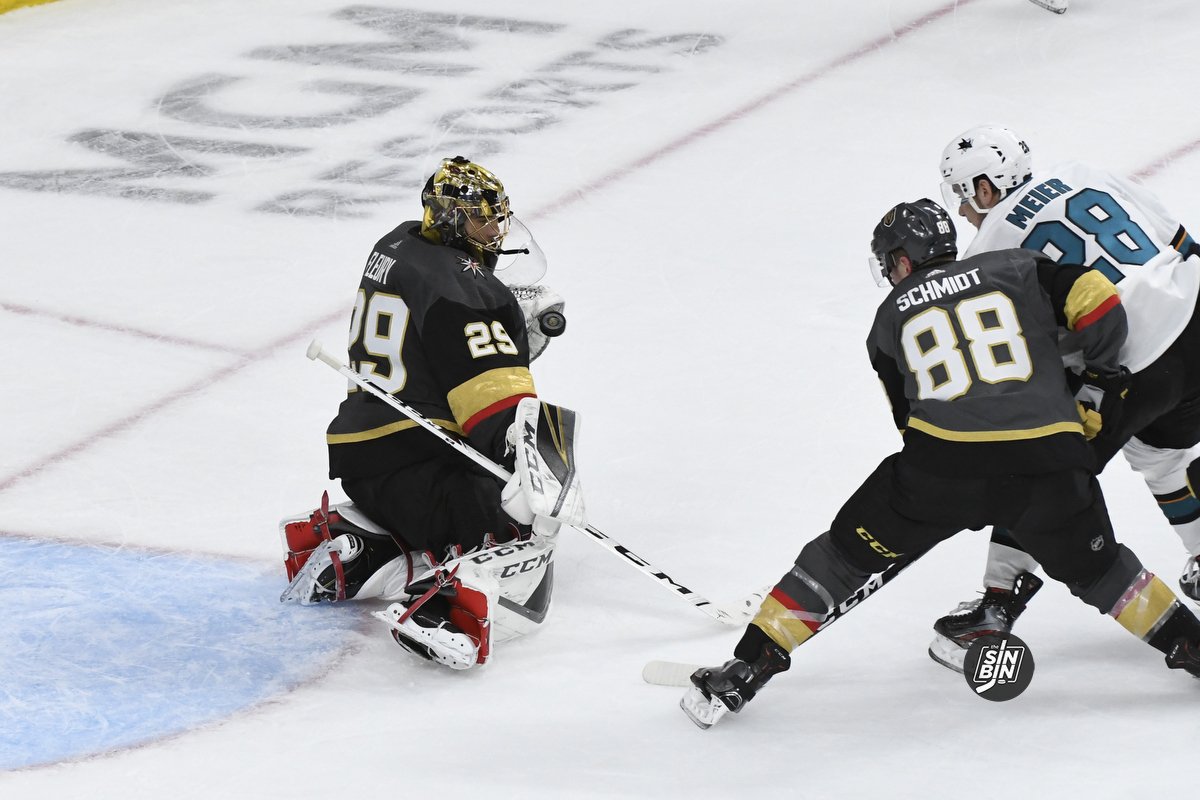 And as this series heads to SAP Center Thursday for what could be a series-ending Game 5 following an impressive 5-0 victory at T-Mobile Arena Tuesday night, it’s a fact Fleury has been a big part of why the Knights hold a 3-1 series lead.

He’s getting better with each period of each game. He wasn’t great in the 5-2 loss to the Sharks in Game 1. And after letting in three late first-period goals in Game 2, Fleury has been virtually unbeatable.

I’m not blaming him for the loss or the trio of goals allowed in Game 2. But he’s doing what you want your goalie to do — stop the easy ones, make a few spectacular saves, be the first line of defense on the penalty kill and keep your team in the game.

He’s tracking the puck with laser precision. He’s always a step ahead of the Sharks in anticipating where the play is going to be. His positioning is spot on. And he’s moving well in his crease and post to post.

In other words, Fleury is being Fleury. He stopped all 28 shots he faced in recording his 15th career playoff shutout, tying Chris Osgood for fourth place on the NHL’s career list.

I have felt good all playoffs. They are a good team, it’s not over obviously. It was a big game tonight and a big win for us. One game at a time. -Fleury

The win, Fleury’s 78th in the playoffs, moved him past Mike Vernon into seventh place on the all-time list for goaltender wins. Next is Ken Dryden, who had 80 postseason victories.  Patrick Roy is the career leader in playoff wins with 151.

It is really cool. I have been very fortunate to play on a lot of good teams and again this year. It is very humbling to be amongst these guys who I grew up watching. -Fleury

His play Tuesday did not go unnoticed by his coach, his teammates and his opponent.

He played awesome the first two periods. We weren’t happy with our game. Obviously, we got out to the 1-0 lead in the first shift fortunately for us so that was big, but we didn’t play our type of game for two periods. I thought and we played a lot better in the third. Fleury was huge, when we needed him, he was huge. -Gerard Gallant

This from Shea Theodore:

I think when you watch him out there and he makes those saves, you see how confident he is. Even when he is playing the puck, he is confident with it and he always makes the right decisions. –Theodore

I thought we created a lot of chances on the other end, but you have to give Fleury credit. He frustrated us tonight and allowed them to be in the position they were in the third. -DeBoer

The Knights have done an awful lot of things well in this series. The line of Paul Stastny, Max Pacioretty and Mark Stone have dominated and the Sharks still haven’t found an answer for them. They’re doing the little things well, like winning faceoffs. They’re outhitting the Sharks.

What Vegas has not done well is avoiding penalties. They’re taking way too many, and it’s going to catch up with the Knights. Maybe not in this series, but perhaps in the next round. Fleury has been tremendous in standing up to the barrages of shots the Sharks have fired at him when they have the man advantage and that’s what you hope your goalie will do. Tuesday, San Jose went 0-4 on the power play and they are just 3 for 20 in the series (15%).

We did a great job, but the goalie was the best player for sure. They had some real good chances and he had to make some quality saves. Sometimes your goalie gets a shutout and it’s a team shutout but tonight was a Fleury shutout. -Gallant

Conversely, this has been another nightmarish series for Jones, the San Jose netminder. He was yanked after 20 minutes Tuesday following surrendering goals early — to Pacioretty 1:11 into the contest, and late — to Theodore with 47 seconds left after Theodore did a pretty snazzy imitation of Bobby Orr and deked Jones out of his pads before depositing a backhander into the net.

I just saw an opening. I saw they didn’t have the greatest of a gap, so I think sometimes you just have to take advantage of it and that worked out. -Theodore 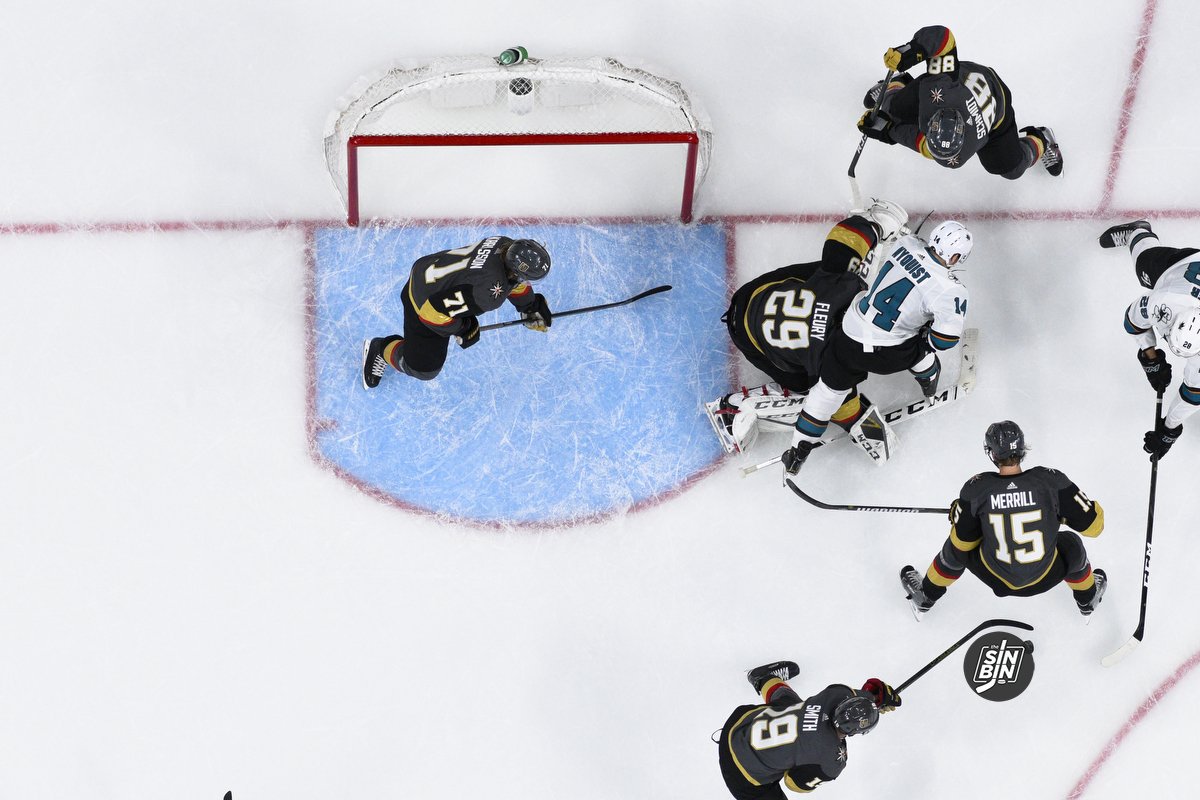 It was the sixth time Jones has been pulled by DeBoer against Vegas, and the fourth time in two rounds of playoff hockey against the Knights (twice last year, twice this year). Jones probably needs some alone time with a sports psychologist. Mentally, how can he possibly be O.K.?

Dell figures to start Game 5. He is San Jose’s best chance at this point to climb back into the series. But the way Stastny’s line is playing and with Fleury not giving anything away, it may not matter.

Usually, one line doesn’t carry a team throughout an entire series. You can be a disappearing act and it’ll get you beat, like Sidney Crosby and his line was in getting swept by the Islanders. But normally, the winning side has balance working for it when it comes to scoring.

In this series, the Knights have relied on one line to do the heavy offensive lifting and they’ve gotten away with it. Going into Game 4, Vegas had two, count ’em, two goals from its forwards not named Stastny, Pacioretty and Stone. But that total doubled after Jonathan Marchessault and Alex Tuch both scored Tuesday.

Again, like the penalties, they’ve managed to get away with it against San Jose. That may not fly in the conference semifinals, regardless of who the opponent is. But maybe those goals Tuesday are the catalyst to get both Marchessault and Tuch going.

And I can almost guarantee you whoever that opponent will be has a better goaltender than Martin Jones. So it’s going to require a more well-rounded offensive effort by the Knights if they hope to be on the right side of the handshake line a couple of weeks from now.

In the meantime, continue to enjoy Fleury. He is doing his thing. He’s having fun and his confidence is right where he wants it to be.