When the Golden Knights step onto the ice at Madison Square Garden today, a familiar face will be at the top of the stat sheet.

Yes, that’s William Karlsson’s name on the first line of goals and points.

Karlsson leads Vegas with 13 goals and is tied with Jonathan Marchessault with 26 points. He’s made a few subtle adjustments and he’s starting to find the back of the net. I don’t know if he’ll get to his high-water mark of 43 goals and 78 points from a year ago, but the fact he’s putting the puck in the net with more regularity of late bodes well for the Knights in their quest to secure a spot in the postseason come April.

Karlsson heating up is mirroring last year. He had just three goals in October of 2017 and at this juncture a year ago, he had 15 goals thanks to a big November which saw him score 10 times. So maybe it was just a matter of patience… again. 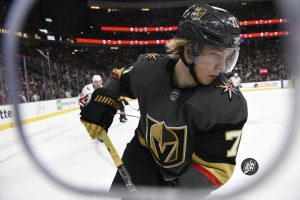 Rare is the circumstance that a team does well despite its number one line failing to produce. The Knights are getting that production from their top line and give Gerard Gallant credit for not breaking up Karlsson, Marchessault and Reilly Smith early in the season when they weren’t dominating. He had unwavering faith in his top trio and he didn’t panic when Karlsson struggled early on.

At first, I thought maybe it was an equipment issue that was the cause of Wild Bill’s early struggles in October. Maybe he had changed sticks and the move didn’t work. Or maybe his old stick had run out of magic from a year ago.

I think it was more of lacking some puck luck and teams defending him better and trying to take away areas of the ice where he liked to have the puck passed to him so he could unleash his deadly one-time shots that handcuffed unsuspecting goaltenders last season.

And like most good players, Karlsson adjusted. He’s working the corners more, then eluding checks to get free. Smith, who has an uncanny knack for holding the puck long enough, and hitting open teammates with an on-the-tape pass, knows where to find Karlsson. Same with Marchessault, an underrated passer given his sniping ability.

You can bemoan Smith for not having more than six goals, but his team-leading 17 assists is indicative of how important his contributions have been to the line, which has accounted for 31 goals and 44 assists for 75 points in 34 games.

And that number 34 is important when you consider Max Pacioretty has played in 28, Alex Tuch 26 and Paul Stastny just four. Karlsson, who has played in every one of the franchise’s games to date, has been durable and reliable. Smith and Marchessault have also played in every game this season.

Karlsson’s defense continues to be an important factor too. Gallant uses him with Smith as one of his penalty killing pair of forwards. You constantly see him in his own end trying to help his defensemen in 5-on-5 situations.

Is he perfect? No. But he’s thinking the game the right way and that’s what Gallant wants.

The Knights obviously squandered a golden opportunity to pick up two points in Newark Friday and they’ll try to make it up today against the Rangers and Monday in Columbus against the Blue Jackets. Karlsson was obtained from Columbus as part of the Knights taking David Clarkson.

Blue Jackets president John Davidson said last year he was thrilled for Karlsson’s success and even though the team took a lot of heat for sending him George McPhee’s way, Davidson was right when he said there was nothing to indicate that Karlsson would suddenly become a 40-goal scorer in the NHL.

What he may regret is Karlsson putting up big numbers on an annual basis. And judging by the way he’s playing at the moment, last year doesn’t appear to be an anomaly.

But it’s not just Karlsson. The fact the Knights are getting better-than-expected offensive input from Cody Eakin (11 goals), Will Carrier and Ryan Reaves with six apiece and Tuch well ahead of last year’s 15-goal pace with 11 so far, it bodes well for the second half of the season. And Pacioretty has 10 goals despite having missed six games.

The schedule will work in Vegas’ favor with more home games coming up. The Knights have only played 14 times at T-Mobile Arena this season and they’re 10-3-1. Starting Thursday against the Islanders, eight of the next 11 games will be at T-Mobile. And if you’re looking for a big push, this is where it should be expected. The three road games are at Los Angeles, Arizona and Anaheim so the trips are easy from a travel standpoint even though the Kings-Coyotes games will be back-to-back Dec. 29-30.

And if Karlsson’s going to make a run at matching last year’s 43 goals, this is where he can make some inroads toward that number.