It Felt Like It Was Happening Again; Then It Didn’t 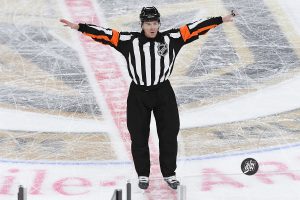 Here we are, 8:40 into the 1st period at T-Mobile Arena. The Golden Knights are buzzing, creating chances left and right, and defending about as well as they have all year, when Shea Theodore skates through nearly the entire Buffalo Sabres team to score a highlight toe-drag goal. The arena is going crazy, the Golden Knights are celebrating, and that nervous feeling that’s been plaguing Vegas early this season feels like it’s fading away, but then, the referee skates to the red line, turns on his mic and says “Buffalo is challenging if the play is offside.”

Watching the replay, it was clearly offside as Max Pacioretty entered the zone early. That feeling of euphoria, gone.

We knew right away the goal was offside as soon as we looked down. It wasn’t a big deal. We knew it was coming. -Gerard Gallant

When something like that happens it all part of the game, you’ve got to regroup from it. It’s still an unbelievable play by Shea, it’s still a highlight. -Brad Hunt 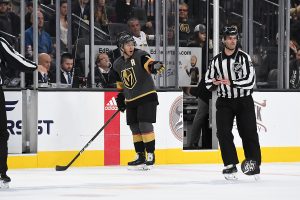 Wrong little guy skating to the box, but you get the point. (Photo Credit: SinBin.vegas Photographer Brandon Andreasen)

Ok fine, no big deal, right? But then, minutes later, Tomas Hyka took a hooking penalty, and all the good the Golden Knights had done in the 1st 10 minutes was ready to disappear into thin air if the penalty was not killed off.

It’s an all too familiar story seven games into the season, and a feeling every Golden Knights fan had the second the penalty box door opened. Here we go again.

Yeah, it felt like that was our luck at that time, but you know, what can you do? It’s in the past and all you can do is battle forward and I’m proud of the way we did that. -William Karlsson

That’s exactly what the Golden Knights did. They killed that penalty (and like a thousand others), they kept battling through the misfortune, and they made it change. Jonathan Marchessault scored a power play goal, Cody Eakin raced for a shorthanded one, and Karlsson even got on the board for the first time this year as well.

Something releases when you get a goal and you are a home and you feel pretty good. Not just scoring either, this was our best defensive game of the year too, so we’ve got to keep that going too. -Karlsson

Through it all though, unlike most games this year, Vegas remained consistent. They didn’t allow a single odd-man rush, they didn’t need any highlight saves from Marc-Andre Fleury, and they dominated the play for a majority of the 60 minutes.

I don’t know if it’s ever crept into our mind that it’s that “holy crap this isn’t going for us” but I felt like tonight we were consistent and that hasn’t been what we’ve been doing early on. We just have to build off it now. -Nick Holden

Those were the Golden Knights. Whatever challenges a game throws at them, they overcame them without any problem. (Photo Credit: SinBin.vegas Photographer Brandon Andreasen)

Looking back, that game was a thorough butt-kicking. The Golden Knights dominated every facet of the game but more importantly, this game broke the mold. Vegas has dominated stretches of play this season, they’ve even been the far superior team in full periods, yet most of the time this year when things have gone wrong, they’ve spiraled.

Tuesday night, that changed, and whether or not Golden Knights players want to admit the “woe is me” feelings, they were there, and this game could be a springboard to bring about the return of the confident team that snuffed out adversity at the first sign of smoke, well before it ever became a five-alarm blaze.