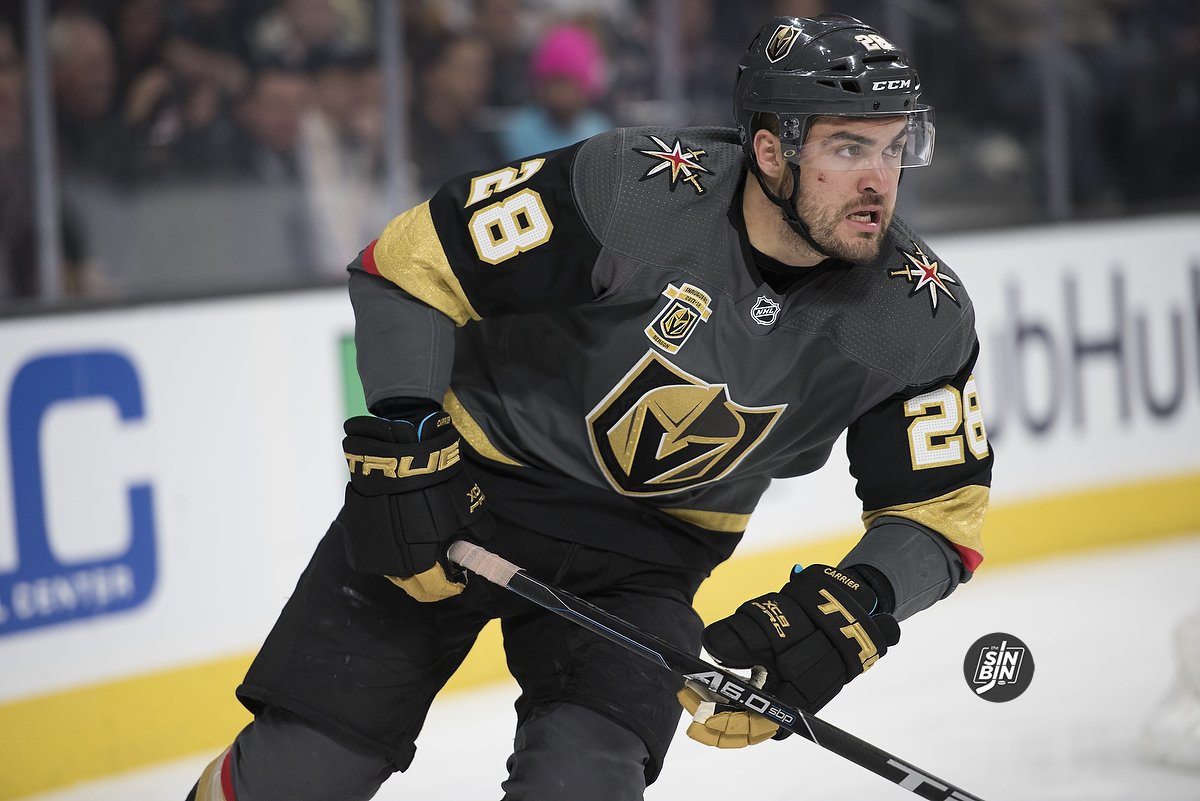 Before William Carrier was a Golden Knight, he was up and down with the Buffalo Sabres and the AHL’s Rochester Americans. When he did get the call, Carrier would skate with some of the Sabres’ elite. In 2016-17, Carrier had 8 points (5 goals, 3 assists) in 41 games. Two of those goals were assisted by 2019 Conn Smyth winner Ryan O’Reilly. The 24-year-old also shared the ice with league star Jack Eichel for a number of games.

William Carrier has impressed many with his offensive zone awareness, elusiveness, and contribution in his own end this year with the Sabres as well as the Amerks. Carrier notched his first NHL goal on a tip-in past… Marc-André Fleury. Carrier has been put on the Sabres top line and counted on as being the gritty playmaker for Ryan O’Reilly and Kyle Okposo.-Max Marko, Dobbers Prospects 2016

Since his arrival in Vegas, Carrier has been fast, aggressive, and a handful on the ice for opponents. But he’s never been anywhere near the first line, spending every game in a Golden Knights uniform playing on a fourth line with Pierre-Edouard Bellemare, Tomas Nosek, and Ryan Reaves. Which made TSN’s Travis Yost ask if Carrier would play a bigger role on another organization. One that wasn’t as deep.

Where do you differentiate between players who are abject drags on performance versus players who might be uniquely challenged playing on otherwise stacked teams?- Travis Yost, TSN.com 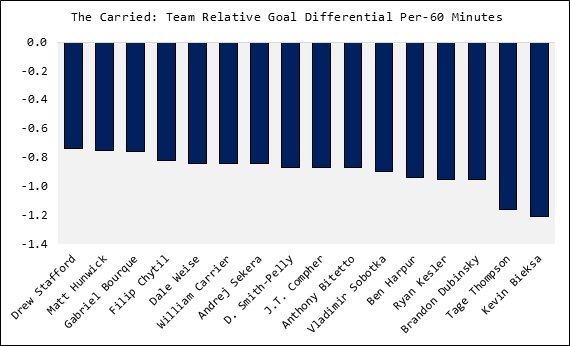 Yost’s results show VGK’s goal differential was -0.8 per 60 minutes TOI for Carrier. It essentially theorizes for every 60 minutes combined Carrier plays (equal to about nine games), the Golden Knights allow almost a goal more than they score at even strength. As we’ve watched, those numbers don’t meet what the eye test says about Carrier. He’s not scoring a lot of goals, but he and his fourth line are certainly killing the Golden Knights every time they are out there as these numbers suggest.

That’s why Yost believes some numbers could look worse than they actually are for certain players, Carrier being one of them.

I look at players like Vladimir Sobotka and Ben Harpur as two poor performers on bad teams, which only serves to compound a problem. Whereas a player like William Carrier may interest me if I’m another team in the league – Carrier’s results are bad, but some of this is because he has been buried in a depth role on a Vegas team that’s been as good as anyone in the league at even strength over the last two seasons.-Yost

There’s been no indication that the Golden Knights are shopping Carrier, but if someone is calling, the front office should be listening. Potentially underused, he could draw interest for his age, speed, physicality, and wild style of play. Remember, the organization traded for Max Pacioretty on September 10th. Any move involving Carrier would be to a lesser degree, but it wouldn’t be entirely surprising. Good luck trying to speculate.

Now, on the opposite end of Yost’s scale are players that outperform the competition, even on a crumby team. Let’s just say I buried the lead.

Mark Stone and Connor McDavid were the top two skaters to lead in positive team relative goal differential per 60. If you may recall, prior to the trade deadline Stone was an Ottawa Senator. His production on a rotten Ottawa team carried over to a competitive team like Vegas.

We know McDavid’s going to be in this group, but interestingly he isn’t at the top of the list. That honour belongs to Vegas Golden Knights winger Mark Stone. Stone, like McDavid, spent most of the last two years playing on a painfully top-heavy team. But even on a much deeper Vegas team, Stone was still the team’s best producer, and his relative numbers were still sterling. -Yost 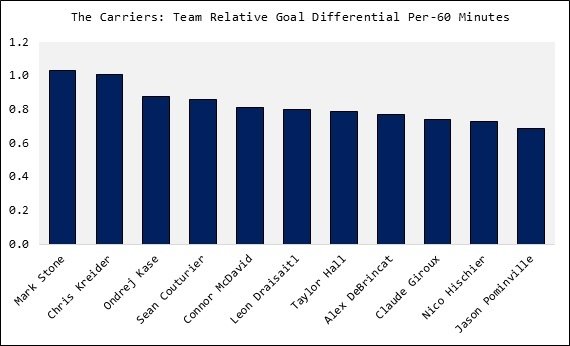 Another reason why he’s being paid so handsomely and why here at SinBin.vegas we think ranking him anywhere outside the top 20 players in the NHL is a bit crazy.