Should it have? Probably.

But Tom Wilson’s phone never rang Saturday after it was determined his hit from behind on New Jersey’s Brett Seney Friday was not going to be subject to supplementary discipline from the NHL’s Department of Player Safety.

Which means No. 43 will be on the ice Tuesday at T-Mobile Arena when the Washington Capitals face the Golden Knights. Unless, of course, he pulls a cement-head move Sunday against Anaheim and the league decides it needs to do something.

Wilson, who must have some of Raffi Torres’ DNA, took a run at Seney and hit him from behind late in the second period of the Capitals’ 6-3 win over the Devils. Seney obviously never saw Wilson coming and Wilson was given a match penalty and ejected.

Immediately, the hockey world called for major sanctions against Wilson, who only recently returned from a league-imposed 20-game suspension from the preseason when he KO’d St. Louis’ Oskar Sundqvist. Wilson appealed and, eventually, an arbitrator reduced the 20-game ban to 14.

It was more kind of back of my shoulder. I don’t know if he was intending to do it or what. I haven’t had the chance to look at it yet. -Brett Seney

Seney was OK and he eventually returned to Friday’s game. But given Wilson’s rap sheet, it was assumed the DoPS would lower the boom on him.

Wilson has been suspended on four occasions by the NHL: 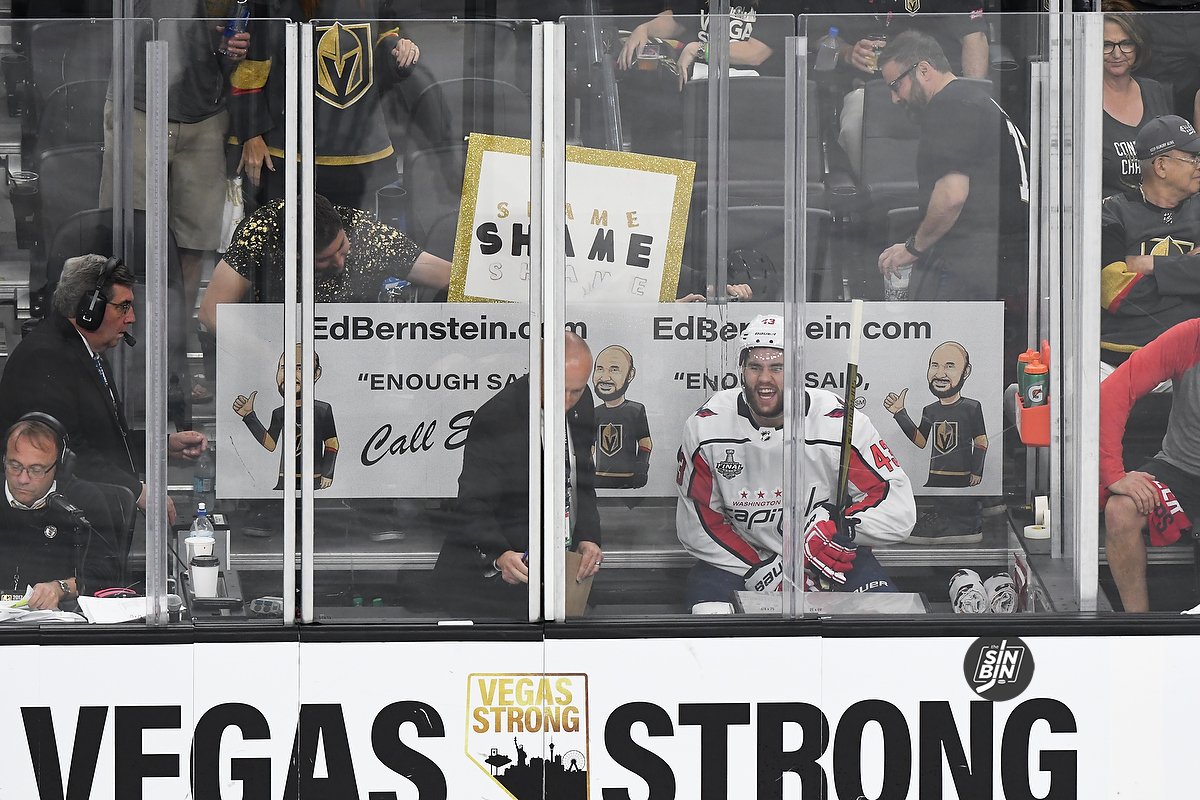 And that doesn’t include all the cheap shots over the years that didn’t get Wilson suspended. Golden Knights fans aren’t going to forget the run Wilson took at Jonathan Marchessault in Game 1 of the Stanley Cup Final last June. There was no real payback during the rest of the Final because the Knights couldn’t afford to lose a player. And there was no retribution on Oct. 10 when the teams met for the first time since June 6 as Wilson did not play.

But will there be something Tuesday? My gut tells me no. Even though Ryan Reeves, Will Carrier, Deryk Engelland, and Brayden McNabb could all take care of Wilson if they chose to. However, if, as Reaves so accurately put it after Game 1, “That’s Wilson being Wilson” and he pulls yet another stunt similar to the one on Marchessault or Friday’s on Seney, Gerard Gallant won’t have to say a word. The players will administer their own justice.

But let’s go back to the play Friday in D.C., and where I have a problem with the league’s lack of action. Seney was in a vulnerable position. His back was to Wilson. He had no idea he was about to get leveled.

Wilson, however, could have avoided making contact with Seney. Just like he could have avoided Marchessault and others he has run at over the years. The fact he chose not to and given his disciplinary history, the league should have sent a stronger message.

Sorry, his history does matter. If, say, Niklas Backstrom had delivered the same exact hit on Seney, he would have still gotten an interference penalty and maybe, maybe, the ref would have made it a five-minute major.

But the refs know Wilson and they know his history. I guarantee you every officiating crew that works a Washington game talks among themselves about Wilson when they go over the lineups. And they do so in an attempt to be proactive and make sure they maintain control over what happens on the ice.

However, once Wilson activities his body at an opponent and makes his contact, there’s not much the guys in stripes can do about it. They can only react to the play and apply the rules the best they can. Thus, he got the 10-minute match penalty and ejection that came with it.

But that’s where the justice apparently ends.

The problem is, the Players Association would have fought any suspension, especially had it been a lengthy one. They went to bat for Wilson for a far worse transgression on Sundqvist.

And, to be fair, Wilson’s hit, while bad, wasn’t aimed at Seney’s head. It wasn’t like the Aston-Reese hit. Had he deliberately hit Seney in the head, there’s no doubt he’d be heading to New York for a sit-down with DoPS chief George Parros and commissioner Gary Bettman, the NHLPA be damned.

Still, the NHL simply can’t condone these kinds of incidents. It’s bad for the game. It hurts its credibility. It cheapens everything hockey is supposed to stand for. 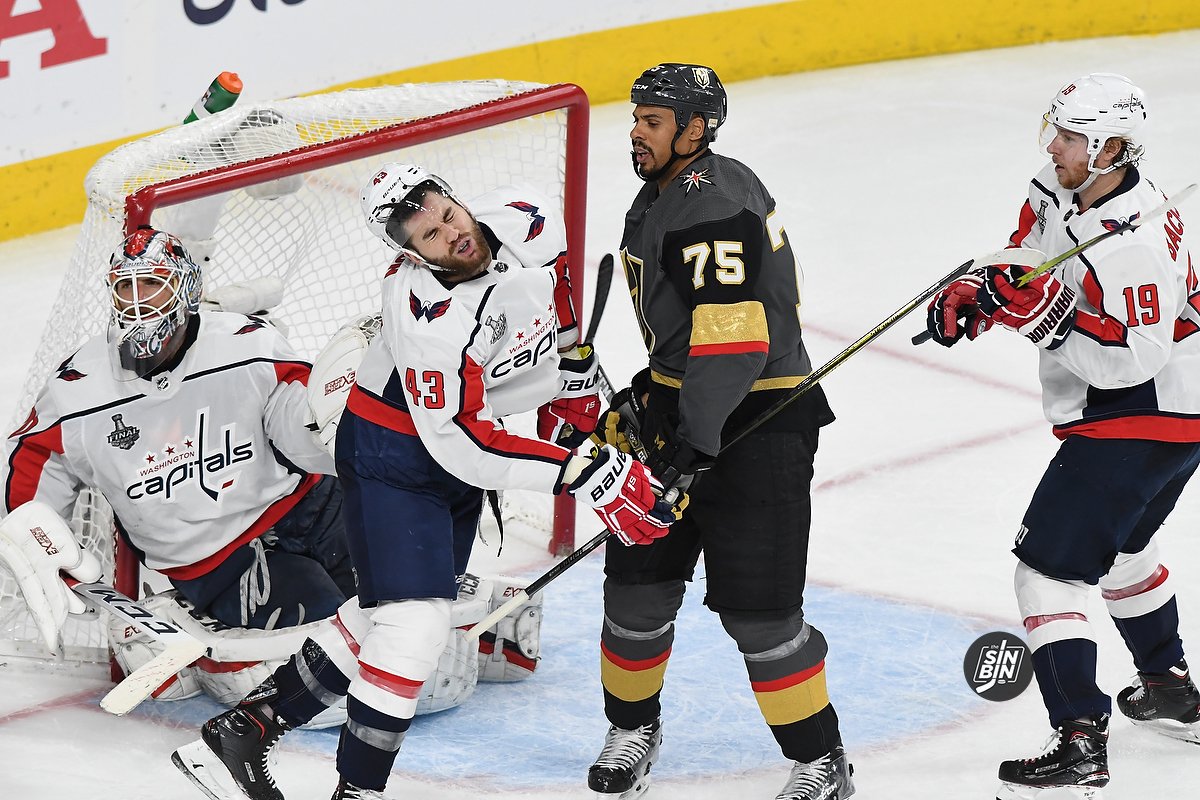 You know what’s sad? Tom Wilson actually has some skill. He can shoot. He can put the puck in the net. When he’s flying right, the Capitals are a much better team.

I’m no psychologist. I don’t know why Wilson feels compelled to run at guys the way he does. But here’s what I do know — should Wilson take any liberties with the guys in the steel grey jerseys Tuesday night, he’ll have more than the Department of Player Safety to worry about.