Iole: Enough With The Eichel Talk, Go After Another Familiar Center

There is a balancing act that every NHL general manager must play, and trying to play it has to be causing Golden Knights GM Kelly McCrimmon plenty of agita.

Jack Eichel, exactly the type of player the VGK have missed throughout its existence, is available on the trade market. When such a player was available in 2019, McCrimmon went out and landed Mark Stone.

When another such player was available as a free agent in 2020, McCrimmon opened owner Bill Foley’s wallet and signed Alex Pietrangelo.

Many websites, which are in the business of getting clicks and not necessarily reporting accurate news, have linked the VGK and Eichel. It’s obvious why, but it’s also just as obvious why it doesn’t make much sense for the Knights to do it.

The Knights would be responsible for a pro-rated portion of Eichel’s $10 million salary this year and then $10 million a year through the 2025-26 season. They already have Stone signed at $9.5 million, Pietrangelo at $8.8 million, Max Pacioretty at $7 million, William Karlsson at $5.9 million, Alec Martinez at $5.25 million, Shea Theodore at $5.2 million, Jonathan Marchessault, Evgeni Dadonov and Robin Lehner at $5 million apiece and Alex Tuch at $4.75 million for next season.

Even if the cap rises, and reports are it may jump minimally to $82.5 million, that would be $71.4 million with Eichel for next year for 11 players. So they’d have $11.1 million to spend on the rest of the group.

That becomes problematic because Zach Whitecloud’s $2.75 million extension kicks in and between Whitecloud, Nolan Patrick and backup goalie Laurent Brossoit, they will account for more than half of the extra, at $6.275 million combined.
On top of that, we haven’t exen discussed the acquisition cost, which will be enormous.

So it seems fanciful, at best, to write Eichel into the VGK’s lineup for the next four-plus years.

There is a player who is perfectly suited for the VGK, won’t cost nearly as much and who could give them that No. 1 center without breaking up the current roster that would make them a more solid Stanley Cup favorite. 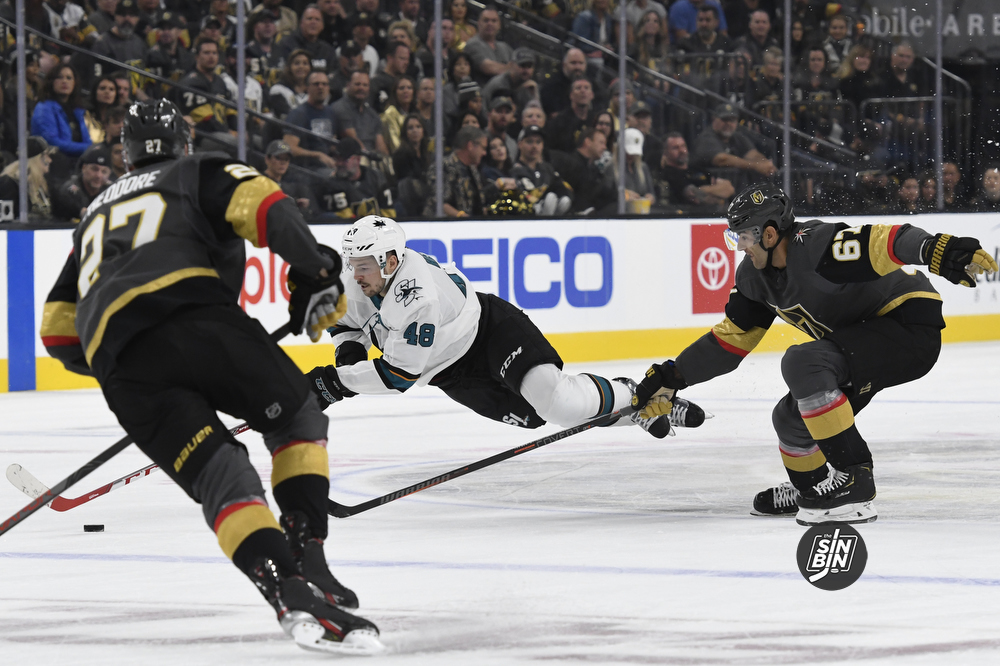 Tomas Hertl would look fantastic between Stone and Pacioretty, and would allow Stephenson to slide down the lineup where, as Pete DeBoer noted after Friday’s up-and-down win over the Ducks, he gets favorable matchups.

Hertl is in the last year of a deal with the Sharks, and is making $5.625 million. He’ll be an unrestricted free agent in the summer.

Now, normally the Sharks wouldn’t trade him, but they’re in a rebuilding mode and despite a fast start, are not expected to make the playoffs. If they could trade Hertl at or just before the deadline for a couple of pieces who would accelerate their rebuild, it would make sense.

They would then have the opportunity to sign him back as a free agent in the summer, if the acquiring team didn’t extend him.

If we assume for the moment that the VGK could get him for picks and prospects and not take anyone off the roster (buy utilizing other teams to retain his salary), imagine how solid they’d look with this group if everyone gets healthy:

That is a deep and impressive forward group and they’d probably have their best shot at a Cup with that group. Because they’ve traded so many of their draft picks, their organizational depth isn’t that great even though, by all accounts, they’ve drafted well.

To get Eichel, it’s going to rip that depth apart, and it will be hard to fill spots they need to fill with the small amount of money they have remaining. And that problem will go on for years.

Sure, Hertl isn’t as good as Eichel if both are playing at their best. But Eichel will immediately undergo neck surgery when he’s traded and who knows what he’ll be like when he gets into the lineup.

At 6’2″, 215, he’ll give them yet another big body who will go to the net, can play on the power play and take some of the pressure off Stone to create offense. He’s also fast, which will help on the forecheck

If Patrick can come back from the upper body injury that has put him on IR and play well, he’s another large, physical presence built for the playoffs.

The VGK would be imposing at that point, but if they won the Cup with him, not signing him to an extension would be acceptable.

It’s great to dream of Eichel in a VGK uniform — Hell, why not see what it takes to get Connor McDavid? — but it’s not realistic.

Hertl, though, is, and given DeBoer’s familiarity with him and vice versa, it may well be the move needed to get the team over the top.