This season, diehard VGK fan and legendary combat sports columnist Kevin Iole will be delivering columns a few times a month on Sundays. 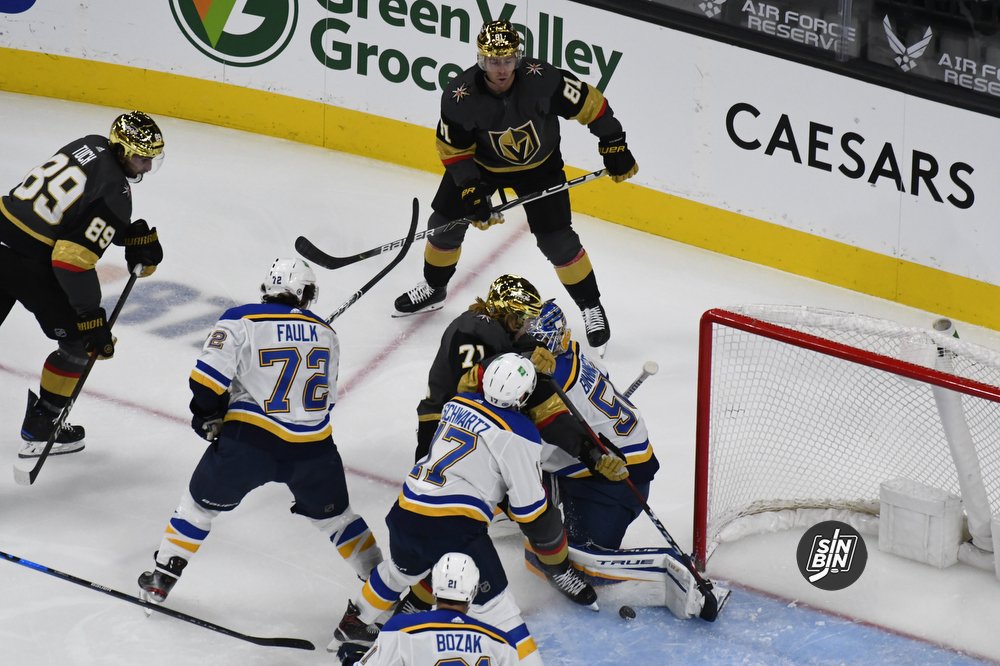 There are six games remaining in the regular season for the Golden Knights and they still have a chance to qualify for the Stanley Cup playoffs. Considering the voluminous amount of injuries they’ve suffered this season, that is fairly remarkable.

Of those six, we can probably count on winning home games against New Jersey and San Jose and a road game at Chicago. If they lose any of the games against the Devils, Sharks, or Blackhawks then they don’t deserve to qualify for the playoffs in the first place.

So, while the Knights will need help, their fate will probably come down to Wednesday’s home game against Washington and road games against Dallas and St. Louis. They’ll probably need to win two of those three to get in.

Saturday’s 4-0 loss in Edmonton simply highlighted the issue this team has had going back to their two months in the bubble in 2020: They can’t score when it matters most.

The problem is they don’t have one of those players who is dominant in front of the net, ideally a big guy, who can tip pucks and put in rebounds.

The goaltending on this team remains a huge question mark. Even if they get into the playoffs, they’ll rely on two goaltenders who are unproven in the postseason. At his absolute best, Lehner is a good enough goalkeeper to win the Cup with, but he hasn’t been near his best after a solid first month and his health is questionable.

When — if — he returns this season, he’ll have zero margin of error.

Thompson is a rookie and while rookies have come in late in the season and led their teams to a Cup (think Ken Dryden long ago and Jordan Binnington recently), the odds that Thompson could duplicate those runs are massively against him.

And so, the Knights will need to score, which has been a significant problem for them in recent postseasons.

They cry out for what has traditionally been regarded in the NHL as a power forward. Guys like John LeClair and Brendan Shanahan years ago would clean up in front of the net. They’d make life difficult for both defensemen and goaltenders and they had an uncanny ability to either tip a shot while screening the goalie or grabbing a rebound quickly and jamming it into the net.

The heat map from the Edmonton game shows just how badly the Knights lack that quality. Everything was from the perimeter. Now, guys who are 6-3, 230 pounds, and have soft hands aren’t hanging around on the waiver wire, but it doesn’t need to be a behemoth.

Pittsburgh, which had one of the best power forwards in recent NHL history in Kevin Stevens, now features a relatively small player, Jake Guentzel, who does just that.

Guentzel is a slight 5-11, 180-pound winger, but he is great in front of the net and scores a ton of goals within six feet of the blue paint. Dino Ciccarelli was the same size as Guentzel but scored more than 600 goals and was inducted into the Hockey Hall of Fame.

Islanders captain Anders Lee is 6-3, 235, and more of the prototypical power forward who is dangerous and gets most of his goals with his butt touching the netminder.

Either way, the Golden Knights don’t have that. And those are the kinds of players you need to win in the playoffs.

The Knights scored 12 goals in the last eight games in the bubble in 2020, the final three games against Vancouver and the five-game series defeat to Dallas. Vegas outshot and out-chanced their opponents in most of those games, but couldn’t put the rebounds into the net.

A LeClair-type player would have made a massive difference.

Then, in the shocking six-game series lost to Montreal in the semifinals last year, the Knights only scored 13 goals. That’s even worse than it looks, because they got four in the series opener and then just nine in the remaining five games.

Again, a lack of a weapon down low was their downfall.

Their best goal scorers, Pacioretty and Jonathan Marchessault, are shooters. Jack Eichel is the kind of player who scores down low and gets most of his goals between the circles, but he’s a lot easier to defend whenever everyone else is kept to the perimeter.

But the Knights need their three best players playing together and on the ice the most with the playoffs on the line. The combination of them together would give them a massive size advantage over other clubs.

Eichel and Pacioretty are each 6-2, 215 pounds. Stone is 6-3, 202 pounds. Starting with New Jersey, DeBoer should put them together, especially if Stone’s legs are strong enough to play the minutes that they’ll need him to play.

We have to assume at this point that Reilly Smith won’t be back during the regular season because if he were anywhere near healthy enough to play, he’d be playing considering the magnitude of the games.

Pair Nic Roy with William Karlsson and Marchessault and have a third line of Chandler Stevenson, Evgenii Dadonov, and Mattias Janmark.

That, to me, would give them their best opportunity at qualifying.

If at some point, they’re fully healthy, they’ll have a chance to win, though I think the goaltending questions and the lack of cohesion make it unlikely they’ll be able to string together 16 wins in the postseason.

Their defense is good enough to win the Cup, particularly if Nic Hague returns and they have a top seven of Alex Pietrangelo, Shea Theodore, Alec Martinez, Brayden McNab, Zach Whitecloud, Ben Hutton, and Hague.

Their forwards are good, and an Eichel-Stone-Pacioretty line could be one of the best in the league.

But the Knights going to have to show they can score in the dirty areas when it matters the most, and they haven’t shown that in the biggest games over the last couple of seasons.

They need help to qualify, but if they get in, that old goal-scoring bugaboo is something they need to fix right away.