UPDATE (4:31 PM PST – 10/22/17)
Malcolm Subban has been placed on IR with what the team described as a lower-body injury. The team says they expect him to be out for “approximately four weeks.”

Think you can be ready for Tuesday? -SinBin.vegas

Yeah I think so, I think that’s the plan so far. I’ve been cleared for contact and I had a couple good practices in a row, and I feel ready. -Marchessault

He described the injury as an awkward fall. Gallant confirmed he expects Marchessault to play Tuesday against Chicago.

Erik Haula – Skated on Saturday in a red “no contact” jersey prior to the morning skate for the game on Saturday. Joined full practice, still wearing red, today.

I’ve got a little bit more testing to do on the lower body but I felt good. I don’t think it’s up to me. I’m happy with the progression I’ve had and I have one more practice tomorrow and we’ll have a better answer by then. -Haula

Marc-Andre Fleury – There is no update beyond what we already know. He is reevaluated every day and will return when he is fully cleared. There is absolutely no timeline on his return.

Malcolm Subban – Subban was injured midway through the third period of Saturday night’s game. On the ice, it appeared to be a lower-body muscle or ligament issue as it was a non-contact injury. The Golden Knights are expected to place Subban on IR and recall Maxime Lagace later this afternoon. They also said he will be reevaluated this afternoon and an update may be available. He is going to be out at least a week. Sportsnet’s John Shannon reports a team source told him Subban will be “probably out for weeks.”  For more on the Golden Knights goalie situation, click here.

Jonathan Marchessault was injured in the game against Detroit. He has missed the last two games with a “lower body injury” and is eligible to come off the IR starting tomorrow. There are no details on what exactly the injury was or when it occurred, but while skating today there were no noticeable signs of discomfort. He did wear a red “no contact” jersey during the entire practice at City National Arena.

Marchy, he had a good skate today and that’s a good start. He’s not off the IR yet, he’s just coming back and trying to get ready for tomorrow. I don’t know if he’s going to play tomorrow yet or not, we’ll see again tomorrow morning. -Gerard Gallant

Erik Haula’s knee was injured after a questionable hit during the Red Wings game.

Haula was seen with a wrap on his knee following practice the day after that game. Like Marchessault and Fleury, he is eligible to return to tomorrow’s game.

Marc-Andre Fleury was placed on the IR with a concussion after a knee to the face against Detroit. The team has been very vague with Fleury’s injury including today’s update after practice.

Fleury, I haven’t heard anything about him today. -Gallant 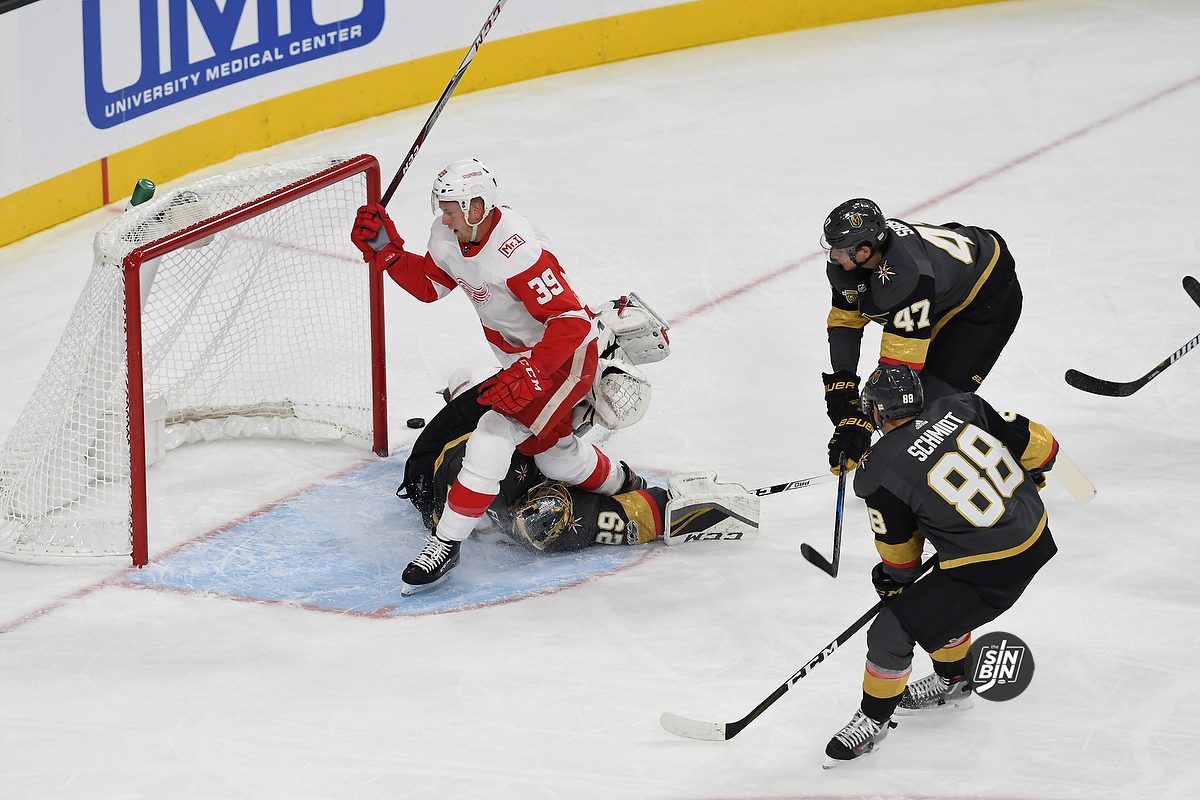 This is the play in which Fleury went down with the injury. It occurred with 8:35 left in the 2nd period. He was shaken up but stayed in the game. He allowed five goals after the injury.

When Fleury was put on IR Maxime Lagace was called up to replace him on the roster. Yesterday, Oscar Dansk was brought up and Lagace was sent down to the AHL. Malcolm Subban is expected to start against the St. Louis Blues tomorrow night.