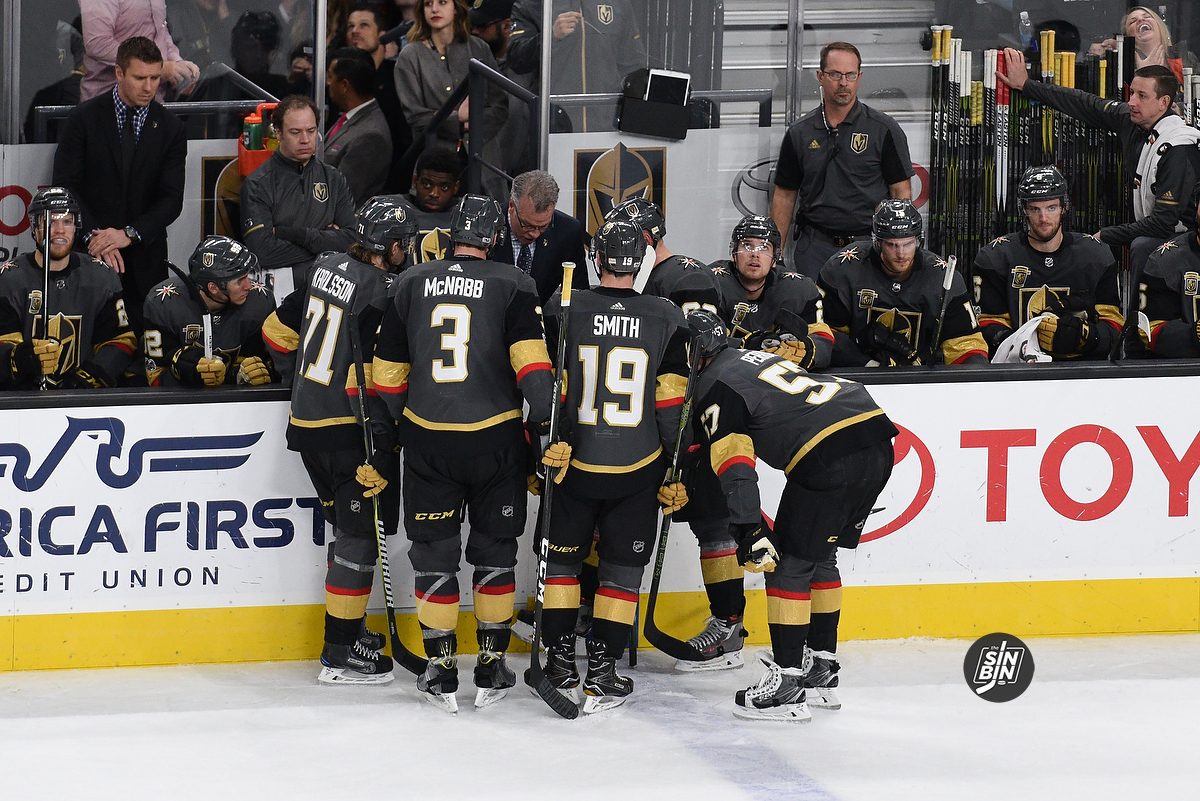 It’s a best of 5 now. The better team will still win, and if VGK plays like they can, it will be them. If they don’t, it won’t be because of this call.

Then, we had to look again.

Keep an eye on the nob of Martin Jones’ stick. Jonathan Marchessault skates through, clips it, turns him, and “prevents him from doing his job.” I know Golden Knights fans don’t want to hear it, but that’s goalie interference.

Goals should be disallowed only if: (1) an attacking player, either by his positioning or by contact, impairs the goalkeeper’s ability to move freely within his crease or defend his goal; or (2) an attacking player initiates intentional or deliberate contact with a goalkeeper, inside or outside of his goal crease. Incidental contact with a goalkeeper will be permitted, and resulting goals allowed, when such contact is initiated outside of the goal crease, provided the attacking player has made a reasonable effort to avoid such contact. -NHL Rule Book

Marchessault, the attacking player, by contact, impaired the goalkeeper’s ability to move freely and defend his goal. That happened whether anyone likes it or not. Here’s the problem, even though the rule says it, the goal probably shouldn’t have been called back.

Early in the year it was anyone’s guess how a goalie interference call would go, but for the most part, if it was close it seemed they were calling the goals back. Then, the All Star break happened, and Gary Bettman said this.

The intention, particularly on goaltender interference, is did you miss something? I think the consensus of the meeting was really more we need to give a refresher – and we’re going to send a memo to the officials: Take a quick look, but don’t search it to death. -Gary Bettman, NHL Commissioner

It didn’t fix the problem. What happened instead was the officials started to let just about everything go as a goal and it was nearly a 180 from early season. So, the league then implemented what they believed was a solution. A group of five men, who would watch the games from the “Situation Room” in Toronto would make all goalie interference calls for the remainder of the season and the playoffs.

This was supposed to create some level of consistency. If the same 10 eyes look at them all, they are likely to come up with consistent decisions. Well, that hasn’t happened.

There are countless examples since late March, when the Situation Room was put in charge, and there still seems to be no clear-cut definition as to what is and what is not goalie interference. In fact, earlier in the same game, Marc-Andre Fleury had a player interfere with him, but it was not called back.

By the letter of the law, an attacking player interferes with Fleury, preventing him from doing his job, and a goal is scored. Again though, it’s close, and if the correct way to look at it is “don’t search it to death” as Bettman’s memo stated, then the goal should stand.

But, so then should Marchessault’s.

The problem is that everyone has a different view of how literally the rule should be taken. Everyone puts different emphasis on different portions of the rule. Was he in the crease? Was he pushed in? Could he have made the save anyway? Was the contact incidental? And there are probably 10-15 more little nuances that can be taken into account, but it’s in the eye of five beholders to decide if the goal should be taken off the board, and they have yet to strike a balance that has led to consistency in the calls.

In the end, the Golden Knights had the game won, and then they didn’t, and no one is really 100% sure why.

Goalie interference is a complete mess. It was only a matter of time it ruined a game in the Stanley Cup playoffs. It’s a shame it was a Golden Knights game, and it stinks to the highest heavens that this series is not 2-0 heading to San Jose. But, it is what it is and the only reason it happened to the Golden Knights was because they played a sloppy first half of a hockey game and allowed a 2-0 lead in the game to slip away before the first 40 minutes were up. This call determined this game, but it didn’t have to.

In the game they were bad, they still did enough to win the game, but had it taken away. That’s over now. Now, it’s up to the Golden Knights to make sure that call is not the difference, because if it is, they let the series get away by underperforming, not by being screwed by a poorly enforced rule.