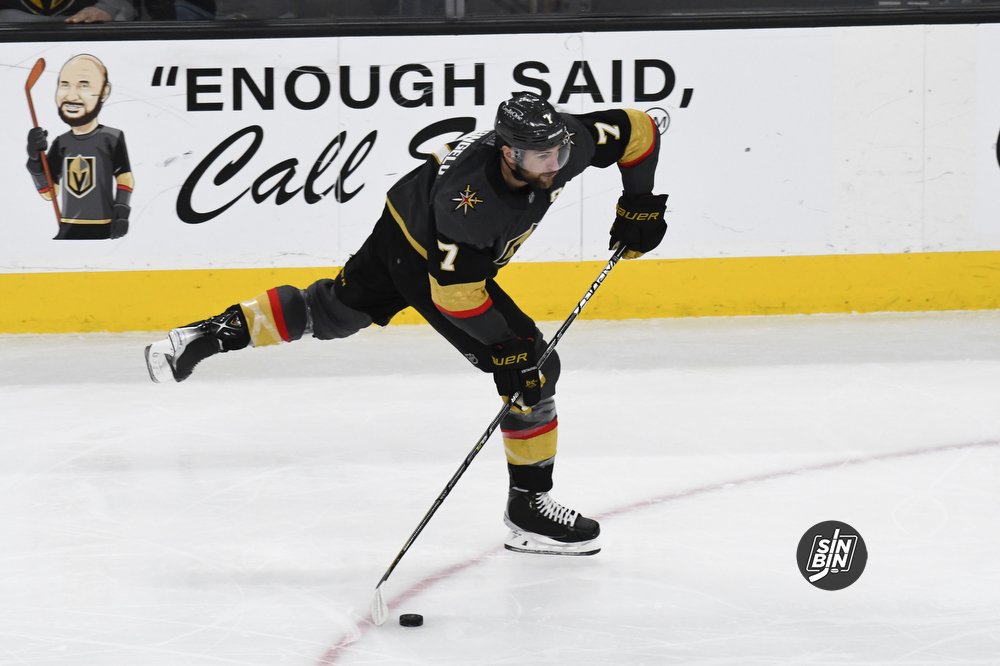 In two of the most important regular season games in franchise history, the Golden Knights attempted 159 shots with 83 of them reaching the net. They’ve scored just twice including a puck that was kicked in by an opposing team player and a 6-on-5 goal to cut the deficit from two to one with not much time left.

A year ago, in Games 5 and 6 of the Conference Finals, the Golden Knights attempted 121 shots, saw 66 reach the goal and scored just three times.

The year before that, again in the Conference Finals, the Golden Knights attempted 134 shots, 69 reaching the goal, and again scored just three times.

Six crucial games, a total of eight goals, and six losses that all resulted either directly or indirectly in the end of Vegas’ season.

We have to look in the mirror. This has been a historical problem here, going dry at the wrong times. There’s no excuses this time of year. You have to find a way to win and step up in the most important moments. -Pete DeBoer

The inability to score has been a problem that has plagued each of the past three Golden Knights’ seasons. It’s a problem that confuses many from both the eye test and the advanced analytic perspective as Vegas appears to be dominating games, handling their opponents, and yet time and time again, when the games mean the most, they end up on the wrong side of the scoreboard.

This season, Vegas has attempted the 7th most shots in the league and they’re 8th in shot attempts. However, they’ve scored on just 5.1% of those attempts and 9.2% of shots on goal. Those numbers are good for 20th and 24th in the NHL..

There’s a fine line between wanting to put everything on net and at the same time you’re making the goalie feel good if you are just throwing it on net from everywhere. It’s about having the confidence and making the extra play to make the goalie get out of position, make him go lateral and give yourself a better chance to score. -Max Pacioretty

Diving into the numbers, the Golden Knights’ 9.2% shooting percentage is comprised of a variety of concerning percentages. Vegas has taken 331 slap shots this season and they’ve scored on just 17, good for 5%, the 28th best in the NHL. Since January 1st, that number is 3.3%, dead last in the league. They’ve also attempted 27 wraparound shots on goal and have not scored a single time,

One of the biggest changes to how we’ve seen Vegas’ offense operate since the change from Gerard Gallant to Pete DeBoer has been in the reliance on shots from the point. Under Gallant, Vegas liked to throw shots on goal from everywhere, then retrieve the puck and do it again. In fact, during Gallant’s 214 games, Vegas put just 262 tipped shots on goal, the 3rd fewest of any team. Under DeBoer, in just 155 games, the Golden Knights have seen 280 shots on net, the 11th most in the league.

The problem has been the efficiency of these shots. Despite the heavier reliance on this type of goal generating play in the gameplay, Vegas has seen their shooting percentage on tipped shots increase by just 0.5% after the coaching change. They were 14.5% on tips with Gallant and they are 15.0% with DeBoer.

The Golden Knights are 12th in the league in shots on goal created by tips, but have just scored on 16.8% of those chances, or 19th best in the NHL.

But it clearly goes well beyond this for the Golden Knights. Vegas has generated 2357 scoring chances per NaturalStatTrick.com, the 10th most in the league. However, they’ve converted on just 13.9% of them, which moves them down 10 spots to 20th in the NHL.

They get in closer even more often than that too. The Golden Knights are 6th in the league in high-danger chances created at 1005, or 13 per game. But, their shooting percentage on these chances is just 18.4%, 19th best in the league.

The good chances that we get we don’t bear down and that’s why we’re losing games. -Marchessault

Vegas has just two players on the everyday roster that shoot better than 13%. Michael Amadio has scored 10 times on just 55 shots for 18.2% and Chandler Stephenson hits at a 16.1% clip scoring on 18 of his 112 shots. All of the high volume forwards come in around 10% and the defensemen are closer to 6 to 7%.

When attempting 40 or more shots, the Golden Knights are a paltry 6-11-2 and a two of the six wins came in overtime. In last year’s playoffs they hit 40 on six occasions and won just two of the six. The year before they did it five times and lost them all. That’s eight wins in 30 games when getting 40 shots on net.

The team simply isn’t accurate and this often leads to a belief that the opposing goalie is shutting them down. In reality, VGK create hot goalies by shooting a lot and not accurately.

Whatever is the cause behind it has not been addressed since DeBoer took over. It must if anything is going to change with this team moving forward.