“I’m Not Too Scared Of Anybody” 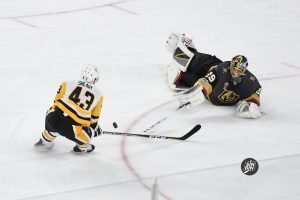 Last night wasn’t the perfect game for the Golden Knights, rarely are they, but it was a game in which Vegas played its preferred style and pace and ended up running away with a 7-3 win.

Confidence is powerful in the game of hockey. Individually, it’s why a player like William Karlsson can go from 15 goals in 162 games to 31 in 60, or Ryan Carpenter can be waived in December and then go on a streak of six goals in nine games. As a team, it’s even more impactful as it breeds a belief that no matter the score or situation someone will step up and lead the team to victory.

We have confidence in this room that if we focus on ourselves and play 60 minutes, we can beat any team in this league. -Luca Sbisa

But sometimes ability doesn’t match the confidence in a locker room, and it turns a confident bunch into a frustrated one. It often happens when a team plays what they believe is a good game and do not come out on top. It takes away that feeling of invincibility great teams have.

If we play well, we will win.

That should be the belief in every locker room of every team, and it probably was at some point in the season, but as the year rolls along and that mantra doesn’t hold up, it chips away at a team’s confidence.

Then there’s the Golden Knights, who are probably the most confident team in the NHL. Why, because they’ve never experienced disbelief. When they play well, no matter who they play against, they’ve won. Not most of the time, every time. It hasn’t mattered where the games are played, who’s in the goal, or the talent on the other bench, if the Golden Knights play the way they are capable of, they will win the game, every time.

I don’t want to brag or anything but I’m really confident in our team. I like the way we’re playing right now. So yeah, I’m not too scared of anybody. -Marc-Andre Fleury

It’s a self-belief that dates back to the very first game in franchise history. Vegas wasn’t playing well, yet they came back and found a way. Then they went to Arizona, where they played great but it looked like the equalizer wouldn’t come. Then it did, from Nate Schmidt, and what’s no longer the surprise it was at the time, they scored in OT and won that game as well.

That’s why you rarely hear comments about the other team coming out of the Vegas locker room because they don’t believe the other team matters. That’s the most powerful weapon this team has going for it. It’s better than William Karlsson on one-timers, better than Malcolm Subban in shootout, and better than Erik Haula in the 3rd period.

The only history this team has is of winning, and it’s become ingrained in the minds of every player on the roster. They still have 22 games to play and then a second season after that, but as long as the belief remains, there’s nothing that can stop this team but itself.