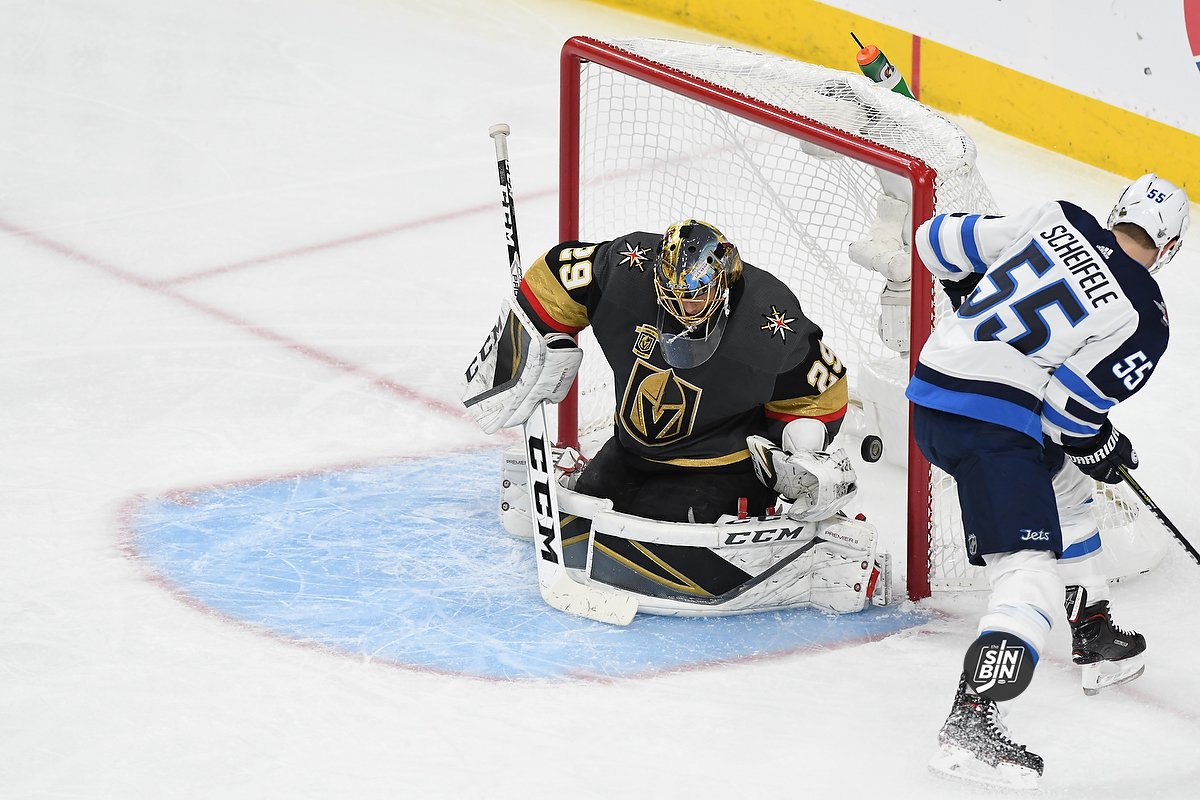 When hockey gets back underway, the Golden Knights will hit the ice with one of the best goalie tandems in the league. Both Marc-Andre Fleury and Robin Lehner are fully capable of carrying a team through the playoffs leading most to view goaltender as an advantage Vegas has on every other team.

While I’m not here to argue against the benefits of having more than one tremendous goaltender, I would like to illustrate the challenge it will present to the man standing behind the bench.

Peter DeBoer has been the Golden Knights head coach for 22 games and has led his team to victory in 15 of them. His early success earned the Golden Knights a Pacific Division title and placed them in the round-robin in the modified playoffs. But the only memory that will last regarding his first season in Vegas will be of the outcome of the upcoming postseason. And with goalie coach Dave Prior no longer calling the shots between the pipes, DeBoer’s decision on goaltenders will, fairly or not, ultimately be the only thing to define his inaugural campaign in Vegas.

Usually, working in hypotheticals is a tiresome, useless activity, but today I’d like to throw some out to show just how impossible the job of selecting a goalie in the postseason can and will be for DeBoer come August when hockey starts back up.

Instead of creating situations, let’s use ones from the past, ones that we know the eventual outcome. Imagine a world in which each of these games was played with the Golden Knights having both Fleury and Lehner on the roster.

We start with the worst moment in franchise history.

After six games of strong goaltending by Fleury, followed by 50 minutes of perfection, the walls started to cave in on the Golden Knights following the phantom major penalty on Cody Eakin. Before the call, Vegas led by three and were getting a strong effort in net.

The first goal happened almost instantly as a shot from the point was blocked directly to a Shark, leading to a cross-ice pass and a perfect shot that beat Fleury. It’s a save he’s made in the past, but not one anyone could ever expect him to come up with.

At this point, there’s absolutely no consideration of switching goalies to put in Lehner. (Remember, this is all a hypothetical in which we are considering what VGK would have done if they had both goalies.)

Goal two comes less than a minute later. This one is a shot pass that deflected in from a tip in the mid-slot. No goalie in NHL history is expected to make this save, but nonetheless, a three-goal lead is now one and there are still four minutes left to kill.

Pull Fleury here in order to buy some time for the penalty killers? Settle the team down? People still complain that Gallant didn’t take a timeout, switching goalies would achieve the same result. I doubt this would be a time to do it, but Monday morning QB’s everywhere would be barking nonetheless.

Fleury stays in. The Sharks tie it about four minutes into the power play. A breakdown in penalty killing leads to a shot from the high-slot that beats Fleury. He’s now allowed three in less than four minutes and blown a Game 7 lead. Is now the time to pull him and put in Lehner?

Goal four is the one that would get the coach in hot water for not switching goalies. It’s a shot Vegas allowed on the PK all series long, in fact, that was in the game plan to give that shot up. Fleury is off his angle and the softest goal of the four gets past him. Trust me, if Lehner was on the Golden Knights at this moment, fans (including myself) would not have been happy that he was sitting on the bench.

Again, Fleury stays in the game having now allowed four. We get all the way into OT, and a poke check gone awry allows a fourth-liner to net the season-ending goal for the Golden Knights. Again, if Lehner is on the team, people are none too happy he never saw the nets in this horrific road loss.

In reality, Gallant never even considered pulling his goalie to put in Subban, nor would anyone have, and thus this criticism never existed, but if the situation were exactly the same, and Lehner was on the Vegas bench, the coach would have gotten crucified over refusing to put in the trade deadline acquisition.

After a long layoff between Round 2 and the Western Conference Final, the Golden Knights headed into a rowdy Bell MTS Place. Right off the hop, Vegas gives up three unanswered goals, including one soft one on Fleury.

Right there, that’s a time most coaches (and DeBoer has done it countless times against Vegas while coaching the Sharks) would pull their goalie and go to the stellar backup.

If Lehner is on the Golden Knights in that moment, he’s in the game.

Knowing the outcome, we know that Vegas played much better as the game wore on, allowing just one more. From there, the Golden Knights went on to win four straight and Marc-Andre Fleury was unbelievable. If you don’t remember, Fleury was so good that Jets players couldn’t stop saying the Golden Knights were “lucky” to be winning the series.

But what would have happened if Lehner had entered in the 1st period? What if he was the one who held the Jets to just one more goal after they scored three in 10 minutes? Does he get the nod in Game 2?

Again, looking back, we now know that Fleury won the Golden Knights the series. Maybe it doesn’t happen if they switch goalies.

Where do we even start with this series?

Fleury allowed four in Game 1, followed by three on 26 shots in both Games 2 and 3. Then in Game 4, he allowed three in the first period including a back-breaking goal at 19:39 sending Vegas to intermission down 3-0 in the game and 2-1 in the series.

Had Lehner been an option, there would have been a heap of chances to make the switch to Lehner. After Game 2. After Game 3. After the 1st period of Game 4. After Game 4. At some point, Lehner would have gotten the goal and maybe the outcome changes.

Vegas wound up losing the series 4-1 and Fleury allowed 20 goals on 136 shots. If Lehner was an option and went unused while Fleury put up a .853 save percentage, the coach would never hear the end of it. But, if Lehner had gone in and the result stayed the same, the coach would be catching plenty of guff as well.

And these are just three scenarios. Through the Golden Knights 27 game postseason history, there are about 10 situations in which a team with an elite goaltending duo could have considered a change.

The words “Golden Knights” are still not engraved on the Stanley Cup, so clearly any chance to have done so could have been the difference. But knowing how it all went down, there’s no question that had Lehner been the backup to Fleury through it all, the coach would have received massive blowback no matter if, when, or how often the changes were made. Because they didn’t have a high-end backup, goalie change has never been a part of the discussion in the Golden Knights two series losses. Had they, that’s all we’d remember.

The fact of the matter for Pete DeBoer is no matter what the outcome of the season is for the Golden Knights, the main talking point will be his handling of the goalies. And to make matters next to impossible for DeBoer, the only way he can “do it right” is if his team wins the Stanley Cup at the end of it.

Anything else, he blew it.