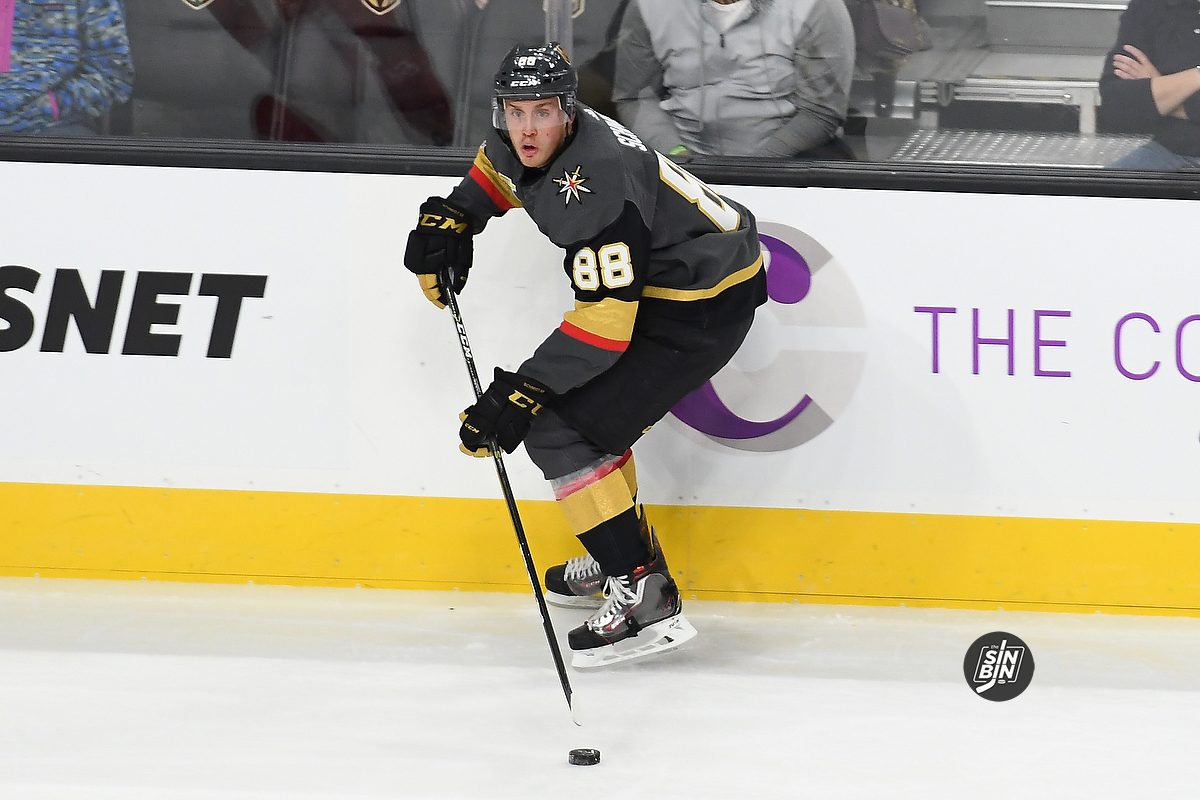 The story of the night for the Golden Knights in Edmonton was the return of their best defenseman, Nate Schmidt, from his 20 game suspension. Any time a team gets one of their best players back into the lineup they are surely going to be better. The score certainly indicated that, but simply pointing to the score and saying, “well, they are better with Nate in there” really does no good.

So, instead of being that guy, I decided to go back and watch every shift Schmidt took in his first game back to help show exactly what he brings and how he’s affecting the other players on the ice.

Let’s get the obvious points out of the way. Nate Schmidt is good, like, really good, like top 20 NHL defenseman good. Anyone who wants to debate that simply hasn’t watched enough of Schmidt in a Golden Knights uniform to know what they are talking about. Schmidt’s defensive awareness, his skating speed and skill, an incredibly strong defensive stick, and his strong offensive instincts make him an excellent all-around defenseman. Where most VGK defensemen fall into one category or the other (Offensive-minded: Theodore, Miller, Hunt) (Defensive-minded: McNabb, Engelland, Holden, Merrill), Schmidt does both well above average.

But enough telling you Nate is good at hockey, let’s show it. Starting with how his skating paired with quick decision making makes the game easy on his teammates.

The play starts with a display of his strong stick and skating. As the puck moves along the boards, he’s always within a stick length of it, moving his feet and constantly taking away the time and space the forwards have to make a play. Then, a huge burst of speed is displayed when the puck pops out towards the Golden Knights goal. But as impressive as the play to get the puck is, what he does with it after is even better. Schmidt quickly gets the puck off his stick to Bellemare. Then, he presents himself as a return option for Bellemare. He’s given the puck back, and quickly moves it over to Theodore who has plenty of ice to safely exit the zone.

As I watched all of Schmidt’s shifts, quickness in decision making was the number one asset that shined through. Jonathan Marchessault and Cody Eakin also excelled in this area last night, but Schmidt’s return brought that back to the defense. To show what it looks like when quick, correct, decisions are not made, check out this clip from later in the game.

Colin Miller has the skating speed to win to this puck, but he makes the wrong decision as to what to do with the puck when he gets to it. He gives it up to Tuch, who is too close to him at that moment and must stop on a dime to pick up the puck. It doesn’t happen, and less than a second later the puck is sliding through the slot. The only reason Vegas avoids disaster is Eakin’s great backcheck. Miller’s other option was to slide the puck around behind the goal to McNabb. In this case, that would have been the right play. It’s this quick decision making that makes Schmidt so good and makes life easier on the players he’s on the ice with. This isn’t to completely blame Colin Miller, because everyone is going to make mistakes in a hockey game, but watching the two examples, Schmidt’s awareness on where to put the puck is excellent. Here’s another example of him doing the same thing in the neutral zone.

While skating backwards, and with a pair of players bearing down on him, Schmidt gloves the puck and softly sauces it between three Oilers. Carrier picks it up and Vegas is headed into the Edmonton zone rather than vice-versa.

The next thing Schmidt brought was his aggressiveness and timing to activating into the play offensively. First, here are two still frame shots of where Schmidt is on a play. Think back to how often you can remember any Golden Knights defenseman finding themselves in this position when the Golden Knights have the puck. 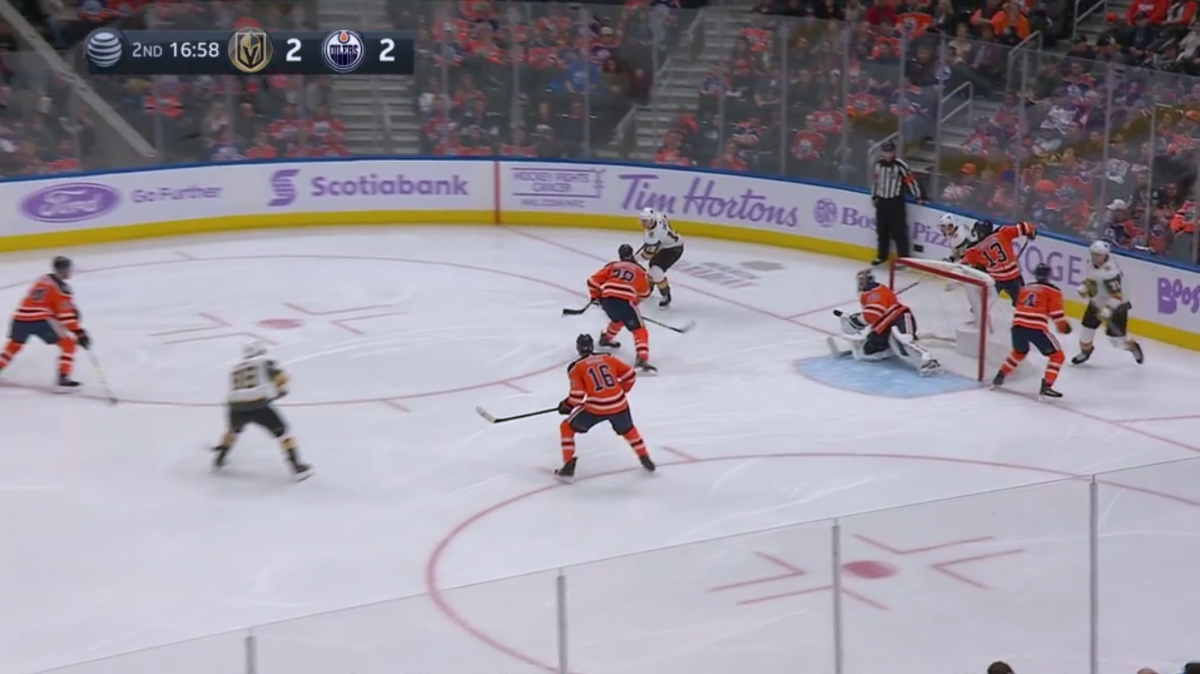 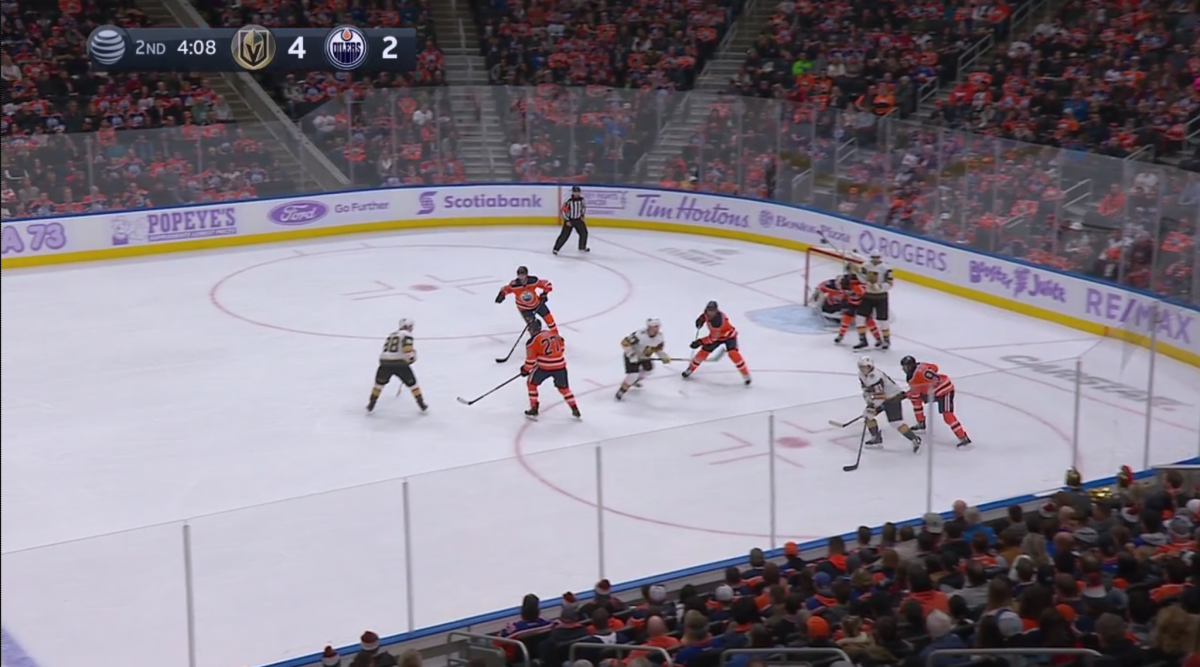 Two different times, both in the 2nd period, Schmidt activated from the blue line to the slot to present himself as an option for Cody Eakin. Again, think back to how often you can remember a defenseman directly in the slot even once, let alone twice in the same period. Here are the plays themselves.

In the first one Eakin gives him the puck and the shot is blocked. In the second, Eakin chooses not to due to defensive traffic. He eventually loses it, and Schmidt circles back to pick it up (not shown in gif).

This has been missing in the Golden Knights game this year. Vegas defensemen have just six goals in 21 games and one of them a Duck put into his own net. Schmidt’s ability to quickly, and safely, jump into the play not only makes himself an option to score, but also opens the game up for the forwards on the ice.

The final aspect Schmidt helped bring back to the Golden Knights game is transition. Because he’s so quick to the puck and makes the right reads, forwards have much more time after reloading to exit their own zone and fly through the neutral zone. I’d put in some clips here, but I’m honestly not sure if it was Schmidt’s impact or if it was just the fact that Edmonton is slow as molasses outside of their top line.

Keep your eyes on how quickly the puck exits the Vegas zone and is into the Calgary zone tonight. When the Golden Knights were at their best a year ago, they did not spend much time with the puck on their own sticks in the defensive zone. Schmidt is the best on the team at getting rid of the puck to start a breakout. They did it well against Edmonton, now it’s time to see if they can do it against a much faster Flames team.

Schmidt’s smile, hunger, and swagger are all great, but none of them help the Golden Knights win games. Luckily for Vegas, his stick checking, holding the blue line, quick correct decision making, and bursts of offensive speed will. They were all on clear display in Edmonton in Schmidt’s first game back. It was just one game, and against an inferior opponent playing on a back-to-back, but his impact was palpable and actually helped the Golden Knights.