It’s becoming undeniable at this point. 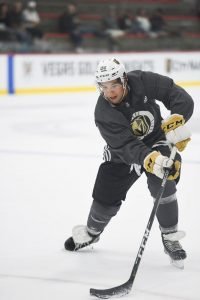 Tomas Hyka scored again, his sixth goal in five games in a Golden Knights sweater, and Tyler Wong had an impact on just about every shift on the ice during the Golden Knights 4-2 preseason win in Anaheim.

Both were brought into the Golden Knights organization (or at least the Chicago Wolves for Wong) prior to the Expansion Draft and they are both making it difficult to be sent away as final cuts near at training camp this week.

As I’ve mentioned a few times before, it’s unlikely George McPhee elects to keep multiple players like Wong, Hyka, and the now-injured Brendan Leipsic, but when compared to the likes of William Carrier, Tomas Nosek, T.J. Tynan, Stefan Matteau, or Paul Thompson it’s going to be tough to rationalize sending any of the three to Chicago.

No doubt, they played very well and Hyka scored a nice redirect goal tonight. He finds a way to put the puck in the back of the net. A lot of guys played a good game tonight and we are really happy with the effort we put out in tonight’s game. -Gallant

It’s not just goals either, Hyka and Wong played together on multiple power plays and their ability to keep the puck in the zone and moving was superb.

Did You Know?: Tomas Hyka set an all-time record for career goals in a Golden Knights jersey tonight (6).

His was also the game-winner. pic.twitter.com/dKUBvAPFpb

The Golden Knights have three preseason games left, all at T-Mobile Arena over the next week. Gerard Gallant has mentioned on numerous occasions that he expects the final two games to be close to the opening night roster, don’t be surprised if either Hyka or Wong, if not both, are on it.