Well he had been out for awhile, you know almost for two months. I don’t know if we got to the him as much with bodies in front, but we got some pucks to the net.- Bill Peters, Carolina Head Coach 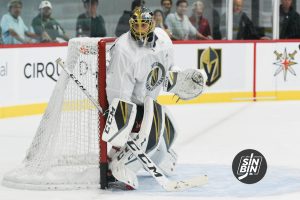 Stop shooting I’m me, I’m just used to getting back in there. (Photo Credit: SinBin.vegas Photographer Brandon Andreasen)

Overall, the early strategy didn’t affect the outcome but it was clear Carolina tested Marc-Andre Fleury right away. The Hurricanes won the opening faceoff, and took their first shot :20 seconds into the game. Fleury faced five Carolina shots before the Golden Knights took their first. When Brayden McNabb’s errant pass deflected off Marcus Kruger for a goal, the Hurricanes were outshooting Vegas 9 to 4. Kruger’s goal was mere luck, but the early strategy resulted positively for Carolina.

The first shot I slipped, I missed my post… not a pretty first one. A few in the chest, two in the pants, it was nice to feel the puck and make a couple of saves. – Marc-Andre Fleury

On the other side of the ice, Carolina goalie Cam Ward secured his 300th career victory. A proud Ward broke down the Golden Knights two goals he allowed.

Someone flew through my eyes and I didn’t see it. All I could hear is the ping off the crossbar. I’m trying to think of the second goal now, oh the breakaway. A tremendous release by Reilly. He’s kinda gifted with that. -Cam Ward, Carolina Goaltender

The happy-go-lucky ‘tender continued to praise the Golden Knights.

They really push the pace. They put pressure on your D-men with their speed. They’re an exciting team, they feed off the atmosphere at home. It’s no secret that they were 11-2 at home. They have good things going here and I’m not surprised. -Cam Ward, Carolina Goaltender

I guess you could say it was a game of goaltending storylines. Fleury and Ward played well but faced different offensive approaches. Partly because Vegas made things easier on the Canes goalie. Remember, 35 SOG is the magic number? The Golden Knights got just 24 shots on Ward. Not good enough.