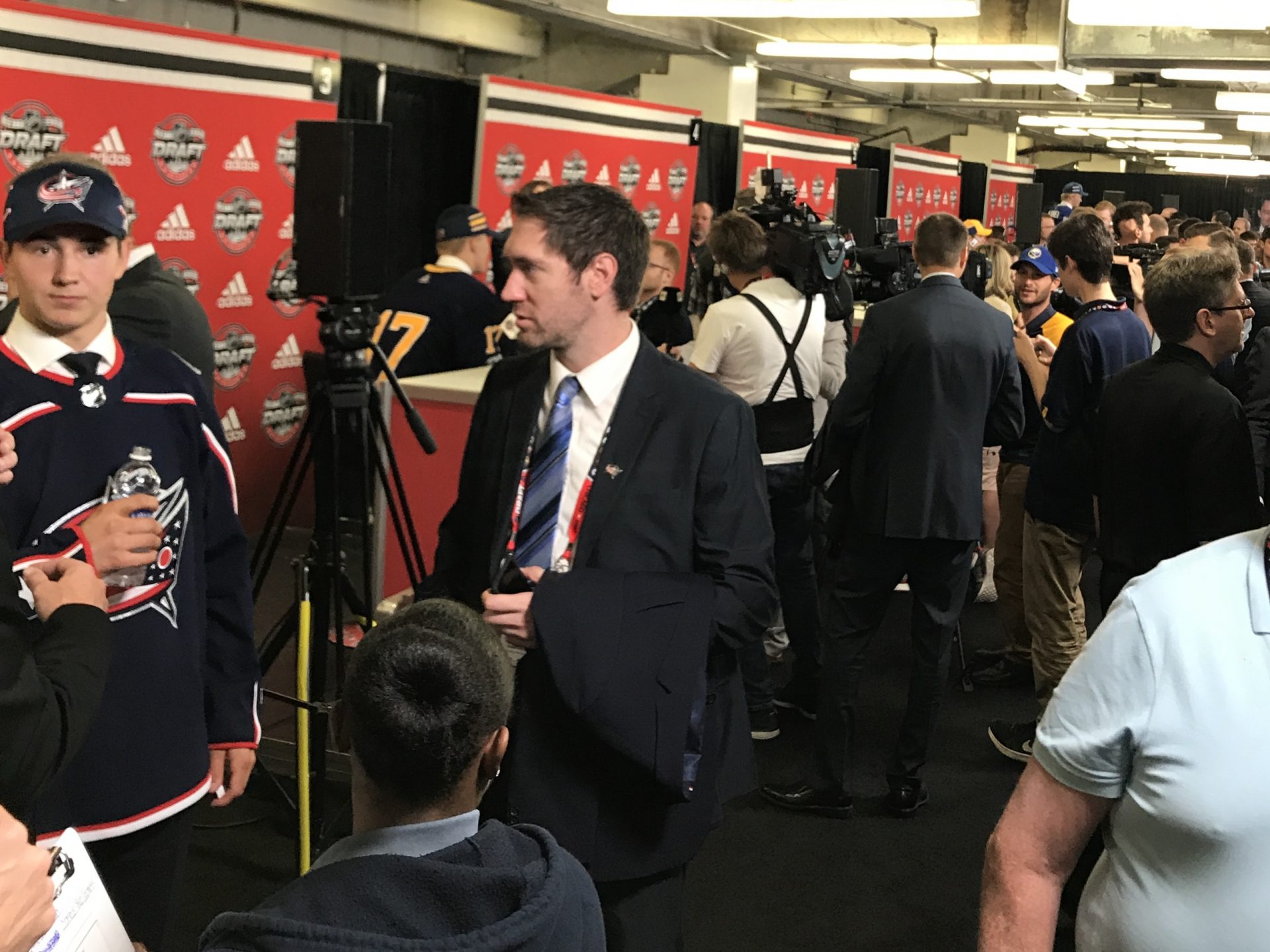 No matter when the Draft happens, it won’t look like this. (Photo Credit: Ken Boehlke, SinBin.vegas)

The NHL is doing its best to fill the void. With the season halted since March 12th and no hockey seemingly on the horizon until July at the earliest, the league has been pushing the idea of hosting a virtual Entry Draft in early June.

Last week Bill Daly, the NHL’s Deputy Commissioner, reportedly sent a memo to all 31 teams making the case for an early Draft.

There are obviously all sorts of issues that come with holding the Draft prior to the conclusion of the season. Elliotte Friedman listed them all including the league’s proposed solutions. Here, I’m going to go through each to illustrate the effects each will have on the Golden Knights.

Using each team’s points percentage to determine the Order of Selection. (That’s under the current playoff format, so 16 teams would be out of the lottery and 15 would be in.) -Elliotte Friedman, TSN.ca

That would mean the Golden Knights’ 1st round pick would happen at #24. Vegas is without a 2nd round selection but hold four more selections in the 2020 Draft.

There’s a chance this could have negatively affected the Golden Knights a bit as Vegas was set to play out the rest of the regular season without Mark Stone and Max Pacioretty. On February 12th, just one month before the league stopped, the Golden Knights were in 17th by points percentage, but 11 wins in 13 before the pause shot Vegas up the standings.

We’ll obviously never know how things would have played out, but it’s reasonable to think Vegas was at its peak when the season was postponed. Six teams were within .027 points percentage of the Golden Knights while Vegas had only one team within that range above them. So, Vegas could have reasonably fallen as low as about 15th (draft selection 17), while risen as high as 7th (draft selection 25).

However, points/points percentage only comes into play if a team busts out of the playoffs prior to the conference finals. So, if the season were to resume and the Golden Knights were to make it out of the first two rounds, their pick would have dropped to 28-31.

All in all, using points percentage as of March 12th isn’t ideal for the Golden Knights, but selecting 24th isn’t the end of the world, and if the season does resume, they’ll have the chance to make #24 look like a gift by winning at least two playoff rounds.

Changing the lottery format this season only — picking just one winner, and limiting any move-up to a maximum of four spots. -Friedman, TSN.ca

This one doesn’t change anything for the Golden Knights directly. However, indirectly, it guarantees the Pacific Division two picks in the top six with both the Ducks and Kings with a good shot to select 1st. The normal lottery could have seen both LA and Anaheim fall as low as 7th and 8th but now they’ll each have a fairly strong chance to win the lottery and can’t fall back more than a pick as opposed to two or three.

Of course, the Sharks should be in the mix after their abysmal season, but they traded their pick to Ottawa for Erik Karlsson.

For conditional trades, the league would propose solutions. The teams would have seven days to either reform the deal on terms acceptable to both, or accept the NHL’s idea. -Friedman, TSN.ca

The Golden Knights do have a conditional pick tied to the 2019-20 season, even though that pick is not attached to the 2020 Draft.

When Cody Eakin was traded to Winnipeg, the Golden Knights received a conditional 4th round pick in 2021 which converts into a 2021 3rd if the Jets make the playoffs or Eakin re-signs in Winnipeg by July 5th.

Whatever the league proposes, it’s not going to be as good as a 3rd, but it won’t be as bad as a 4th. The Jets were right on the outside of the playoffs when the league stopped but were surging having won four straight.

We’re talking about a difference of 31 picks in the middle rounds of next year’s Draft, so this is far from significant, but if the Draft does occur in June, that conditional pick will go down as a win or loss for the Golden Knights depending on the outcomes of the Jets 19-20 season and Eakin’s future. It’ll just be a while until we know which column to file it under.

Obviously, another concern is a June draft would prevent teams from trading players they’ll need if the season resumes. -Friedman, TSN.ca

The final concern is impossible to project, but I’ll try anyway. In the three Drafts, the Golden Knights have participated in, they’ve never traded a roster player during the Draft. This includes the Entry Draft that occurred just two days after the Golden Knights’ Expansion Draft.

The Golden Knights have however been very active in the days and weeks directly following the Draft. They made four trades involving players in June/July of 2017 and also made four in June/July 2019.

With little room to operate within the salary cap this offseason, the Golden Knights were not likely to be active in the player for pick market at the 2020 Draft no matter when it occurred.

So, all in all, a June Draft wouldn’t change much at all for the Golden Knights. Many other teams are in much more precarious situations with the league’s potential plan.