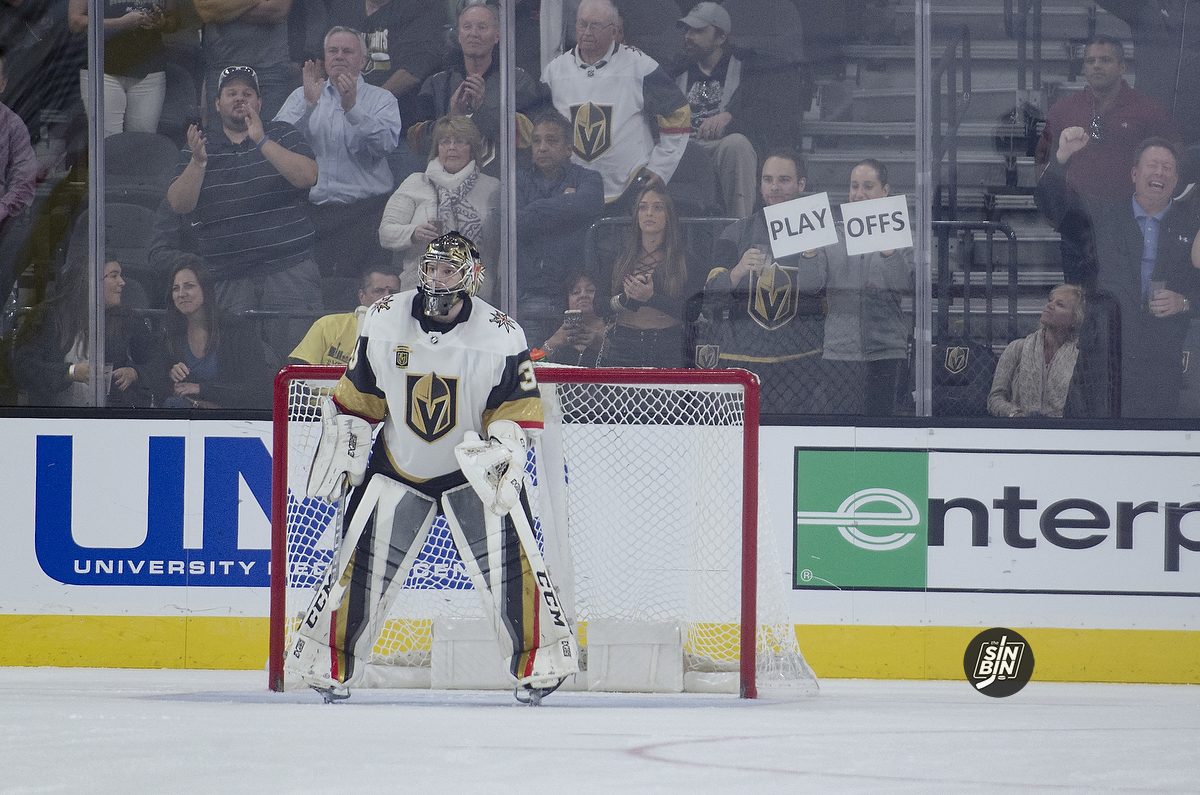 So here we are, Golden Knights game 75, already with 100 points in the bank, and exactly one win away from clinching a playoff berth in their inaugural season. All it takes is a win in regulation or overtime against Colorado today or Monday. Here’s why.

Vegas currently sits with 100 points. This is already enough to have clinched a higher season point total over Arizona, Vancouver, Edmonton, Calgary, Chicago, and Dallas. To clinch a berth, the Golden Knights must have a higher point total than at least five Pacific Division teams OR seven Western Conference teams. With four Pacific and six Western teams in the bank, they just need one more.

A win today or Monday would put them at 102 points.

If the win occurs in regulation, the Avalanche would remain at 88 points with seven games to go. Thus, if they win every game the remainder of the season, they would match Vegas’ total at 102.

The Ducks have 89 points with seven games left. Thus, if they win out, they’ll have 103 points, one more than the Golden Knights.

On April 1st, Colorado travels to Anaheim to face the Ducks. If the Ducks win, they still have the possibility to finish the season at 103 points (ahead of Vegas), but that would mean the Avs lose at least one point, making 101 their highest possible total. Thus, becoming the seventh Western Conference team needed for Vegas to clinch.

If the Avalanche win, the Ducks will be left with 102 as their highest possible total, equal to the Golden Knights. However, the Golden Knights have clinched the tiebreaker (regulation or overtime wins, aka ROW) against the Ducks. Vegas already has 44, Anaheim has 34 so they can only reach 41 if they win every other game. Thus, an Anaheim loss to Colorado would also be enough to eliminate the final team needed for Vegas to clinch.

The one last caveat is if Vegas beats Colorado in overtime.

If that happens, Vegas moves to 102 points, and Colorado to 89. Therefore, their highest point total possible is 103, however, if they achieve that, the Ducks would have to suffer a loss, and Vegas would clinch. But, if Colorado loses in OT to Anaheim, the Ducks could still have 103 points and Colorado would match Vegas with 102. This is where the tiebreaker comes in. With a win over Colorado in regulation or overtime, Vegas would earn its 45th ROW. Colorado has 39 at the moment. With a loss to Vegas and a loss to Anaheim, they would have just six games left. Therefore, they must win them all to tie Vegas in ROW, they would be tied in points earned in games played between the two teams, and they would still have a chance to make up the 27 goal differential to win the final tiebreak.

The Avalanche play the Blues on April 7th. To fulfill the necessary requirements to earn a playoff berth over Vegas, the Avalanche must have won every one of their other six games, in regulation. Thus, the Blues would have had to have lost in regulation to the Avs. The Blues currently have 87 points with eight games left. That loss would leave them with 87 points with seven games left. 87+14=101, one fewer than Vegas.

So, all in all, a win in regulation or overtime against the Avalanche will officially clinch the Golden Knights place in the postseason. A win in shootout, well, per our calculations, there’s still a chance all three of the Ducks, Avs, and Blues could finish above Vegas.

Got it? Great, now go watch the game.

(According to my calculations, a shootout win would not quite be enough, but when you throw the Kings in the mix, things get even messier, so there’s probably a combination I couldn’t come up with. But, since I couldn’t exactly figure it out, let’s just hope they get it done in regulation or OT.)

NHL Public relations has it clinched even with a shootout win. So, there’s that. I’d go through the part where they clinch with a shootout loss to Colorado, but that seems like a lot of work.

The @GoldenKnights are in position to clinch a berth in the #StanleyCup Playoffs today.

Only two NHL expansion teams have achieved that feat since 1968-69: the Whalers and Oilers in 1979-80 after joining from the WHA. pic.twitter.com/WMkRqn47HZ