How Much Lost Offense Can Vegas Make Up? 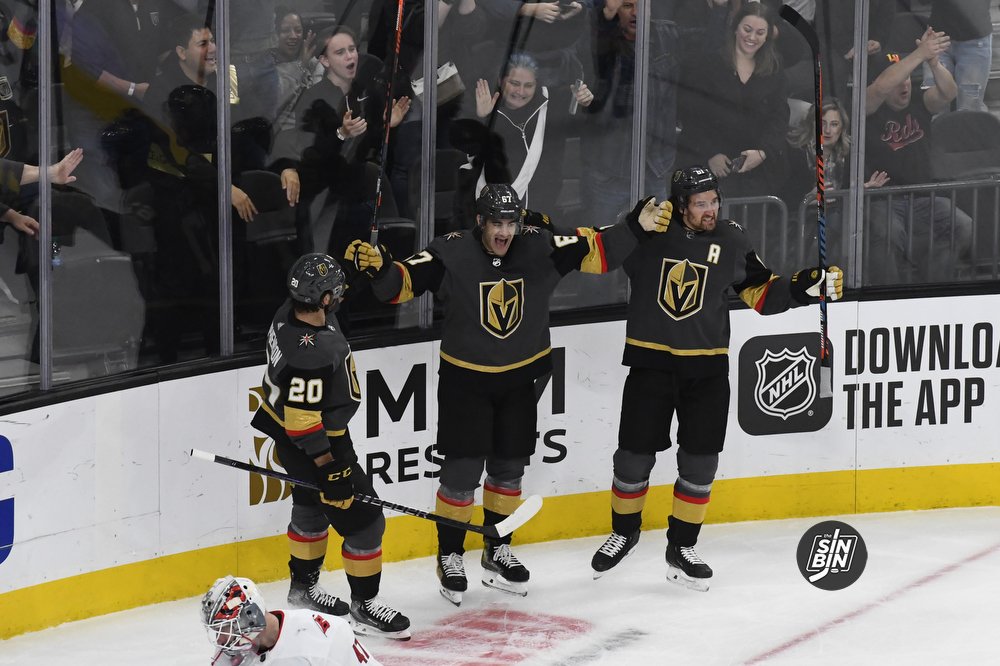 Since their arrival, Max Pacioretty and Mark Stone have been Vegas’ two statistical heavyweights. The captain is a point per game (0.99) player and his linemate isn’t far behind (0.86), so it’s safe to say their impact will be missed. Without Pacioretty and Stone for an extended amount of time, the Golden Knights will need to find scoring from within to make up for that massive loss of offense.

% Of Team Offense From Pacioretty and Stone

In a full NHL season, Pacioretty and Stone score on average a quarter of Vegas’ goals. While they’re out, other Golden Knights players will have to make up for that lost offense. All fingers will point to the Misfit line but coach Pete DeBoer can’t rely solely on them. Since the inaugural 2017-18 season, the trio of William Karlsson, Jonathan Marchessault, and Reilly Smith have added offense on a nightly basis. Which is a big reason why all three players have scored the most points in franchise history. The Misfit line will need to find ways to add more but Vegas’ coach is already expecting a quarter of his offense to come from them as it is.

The construction of the Golden Knights roster is heavily reliant on the top-six and somehow the team will need to replace the missing offense in order to set up for a late playoff run.

Star defenseman Alex Pietrangelo signed with Vegas to play with some of the NHL’s best players and annually compete for a Stanley Cup. Under his experience and leadership, the Golden Knights should be able to stay above water without their two offensive giants. In 2019, Pietrangelo’s St. Louis Blues shocked the hockey world by besting the Boston Bruins in seven games for the Stanley Cup. It’s almost lore at this point but everyone remembers St. Louis climbing out from the bottom in January only to reach the finals in May. Down the stretch, St. Louis won 11 games in a row. During that regular season run, Pietrangelo added .64 points per game (4 assists, 3 goals) in 11 contests. When his team needed him the defenseman delivered. Golden Knights fans witnessed Pietrangelo kick it up a gear and become the team’s best player in the postseason.

Pietrangelo may not score the goals but he’ll create and facilitate enough to impact the offense. Add in Shea Theodore, Alec Martinez, and the rest of the defense, the Golden Knights should expect plenty of scoring from their blue line. To get through the murky injury waters, Vegas will need the defense to contribute as much as they did last season.

Evgenii Dadonov has a total of six periods under his belt as a Golden Knight but all of a sudden he has become an extremely important piece. Without Pacioretty and Stone, Vegas will quickly need significant impact from Dadonov. The veteran has succeeded in a top-six role in the past so hopefully, an elevated role will benefit the Golden Knights sooner than later. Over the years Dadonov has bumped into some lengthy scoring streaks, good and bad. With Florida, the 32-year-old had several three-game and a handful of four-game scoring streaks. Last season in Ottawa, Dadonov registered two multi-goal games and twice scored on consecutive nights. Unfortunately, there have been ugly streaks as well. Over his career, Dadonov was held scoreless for seven, eight, nine, and 19 games in a row. The Golden Knights cannot afford a 19 game drought from any of their top forwards.

It’s unlikely Vegas will make up for the full 25% of missing offense but the goal should be to keep their heads above water until the team is fully healthy. When that day comes, and no matter what their position is in the standings, a stacked Vegas deck can defeat any Pacific Division standing in their way.

There’s a great scene in the movie Moneyball depicting Oakland Athletics general manager Billy Beane (played by Brad Pitt) and the A’s scouting staff sitting around a table attempting to construct a winning lineup. Oakland had previously lost two vital free agents and the plan was to replace those players. Beane was realistic and understood he couldn’t replace star players but he could replace their production with several, less talented players. That strategy can be used by the Golden Knights in their current situation. The front office can’t replace Pacioretty and Stone with players like Pacioretty and Stone. It’s expensive and difficult to match talent but it’s possible to try and replace their statistical contributions with a group of players. Will it be Mattias Janmark, Chandler Stephenson, Nolan Patrick, Peyton Krebs or will it be someone unsuspected that overachieves in the absence of Vegas’ top forwards?