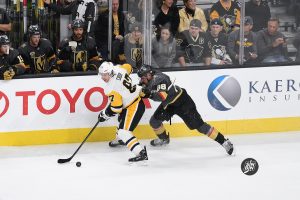 We gave Nate Schmidt the chance to answer this question before the Golden Knights first opportunity to play against the league’s best player. His answer was succinct, educated, and actually seemed do-able. Then the Golden Knights lost 8-2 and McDavid went off for two goals and an assist in the butt kicking. Schmidt’s answer has changed a bit since.

It’s a healthy medium. Sorry for the cliche. – Nate Schmidt

Most athletes and coaches say they play one game at a time and always move on to the next game. Classic sports cliches. Well, that’s not always the case. Vegas defenseman Nate Schmidt clearly remembers getting lit up in Edmonton.

Schmidt spent plenty of time sharing the ice with McDavid. He led the team with 29 shifts, shorthanded minutes (3:55), and total ice time (23:39) against the Oilers. Schmidt ended the night -2 after being on the ice for four of Edmonton’s eight tallies. He hit for the cycle while on the ice; two power-play goals, one shorthanded goal and one even-strength goal. Well, actually I guess McDavid and the Oilers hit for the cycle.

He had his way with us, and that’s what makes this game that much more exciting for us. Especially, after what happened the last time we played them. -Schmidt

What can Vegas do to contain McDavid this time around?

You got to have a great stick against him. I realize we’re trying to close down his time and space, yes that’s important but you can’t let him in areas where he can make plays. A defenseman’s stick can dictate where the play goes and how you want him to come into your zone. -Schmidt

Marc-Andre Fleury was injured in the first matchup but knows it’ll take a group effort to keep McDavid from scoring this time around.

Keep an eye on him. He’s very quick, great vision, great hands. We need to be aware of where he is on the ice at all times. -Marc-Andre Fleury

McDavid with an insane assist 🔥👀 pic.twitter.com/0TWcoltFJO

Like Fleury said, McDavid’s vision on the ice is top of the charts. His goal scoring skills are stunning but his assists are just as jaw-dropping.

You have to be concerned with both, that’s why he’s so dangerous. If you start playing the pass, all of sudden his great shot scores a goal. Vice versa. You start playing him a little tighter, so you don’t want him to shoot the puck, you try to block him and then he makes a great play -Schmidt

After last game’s 8-2 drilling by the Oilers, Vegas took their game to the next level. As Coach Gerard Gallant mentioned, the Edmonton loss was the turning point of the season for the Golden Knights.

Will McDavid and the Oilers end their first half with a bang? Or will Schmidt and Fleury start their second half with a bang? Either outcome, expect to see all three players play this one, one game at a time, and move on… but not really.